The Enemies of Nation States and Secure Borders 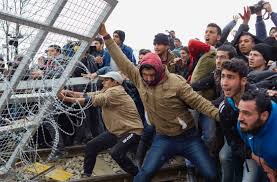 One of the most enjoyable consequences of candidate Trump’s election to the US Presidency is watching the hysterical reaction of America hating ‘progressives’ at home and abroad.

It’s a wonder to behold how this businessman turned politician can carry on with his ‘putting America first’ agenda in the face of a twenty-four-hour assault by the mainstream media as directed by his enemies in Congress, its establishment and the deep state.

It’s not only his enemies at home that are gnashing their teeth with frustration and anger. The globalist ‘one world’ fanatics at the United Nations and the European Union are experiencing a similar apoplectic meltdown as he dismantles their plan for a borderless world.

The ideology of the ruling elite that run the supranational institutions is deeply embedded in their subconscious. This renders them incapable or unwilling to understand the desire of individuals to live their lives in liberty, free from oppressive, remote governments. They also cannot understand an individuals’ love of their country, their culture and their way of life.

When one listens and reads what these supranational leaders have to say about borders and mass immigration it puts the migrant caravan that is currently on its way to assault the borders of the United States into perspective.

They also highlight the perverted logic they use to justify mass immigration into Europe while ignoring the disastrous consequences this has had on the people of the host nations.

The Secretary-General of the United Nations, Antonio Gutterez, is a rabid socialist who believes that ‘migration is not the problem but the solution’. His contempt for people and democracy was on full display when he went on to say that politicians should ignore the voters by urging them to prioritize ‘’values’ over voters’ wishes.

Speaking like a true globalist believer he also stated that the idea that management of migration is a matter of national sovereignty is extremely limited. This is because of people smugglers but he goes on to say that regardless of these criminals, mass migration is inevitable and will not stop.

Disregarding the fact that in the Netherlands, for example, sixty-five percent of the non-European migrants that arrived in the 1990’s are still living on welfare, Gutterez contradicted himself by stating that “we must convince Europeans that migration is inevitable and that it is the multi-ethnic societies which are multi-cultural and multi-religious who are building wealth”.

Across the Atlantic the President of the European Commission, which serves as the Executive Branch of the supranational European Union, is even more blunt when it comes to nation states and secure borders.

Speaking at a European Forum in Austria, the globalist fanatic, Jean-Claude Junker, called upon Europe to show solidarity with refugees, ignoring the fact that the overwhelming majority are economic migrants not refugees.

“We have to fight against nationalism” Junker declared and went on to say that “borders are the worst invention ever by politicians… In the concentration of globalization and European problems we must not lose our way”.

Gutterez and Junker are moderate compared to Frans Timmermans the Vice-President of the European Commission and probably the biggest open borders fanatic of them all. This powerful politician is Nazi-like in his fanaticism for a borderless world. Despite this he is highly respected among the supranational ruling elite and is feted around the world as if he were the oracle from classical antiquity.

“Europe must accept diversity or face war” this madman declares before he goes off on a rant that should dispel once and for all any idea that the European Union and the UN are benign organizations that have the best interests of humankind at heart.

In shades of the Third Reich he urged the European Union Parliament to increase its efforts to “erase single mono-cultural nation states” and accelerate the process in which “every single nation on earth must eventually become diverse”.

If that isn’t scary enough he stressed the importance of “not allowing even the remotest places on the planet to exist without diversity”.

For those Americans and Europeans who believe that open borders are compassionate, along with those who want to welcome the caravan from Central America, read what this fanatic has to say and be warned:

The future of humanity, so he says, no longer belongs to individual nations and cultures, but rather a mixed super-culture. Contemporary conservatives, who value their own traditions and want a peaceful future for their own communities, value a "past that never existed" and can therefore not dictate the future. Timmermans therefore implies that European culture and heritage are nothing but social constructs and anybody who says otherwise is narrow-minded. He concludes his speech by stating that Europe has always been a continent of migrants and European values inherently mean accepting diversity.

He expresses concerns that if the EU does not increase efforts to ensure that diversity gets to every single spot on Earth as fast as possible, the peace in Europe will be at stake.

The means to achieve this are, of course, large scale, illegal mass immigration of Muslim men into Europe; the efforts to "ensure no country can escape from inevitable diversity" imply forcing immigrants onto the very last, I quote, "remotest places on the Planet" to ensure that there are no homogeneous societies left anywhere.

It is very unusual to hear a EU politician speak his intentions so clearly.
It appears that he no longer feels the need to hide the fact that "diversity" means nothing less than chasing down the last remaining Europeans on Earth and flooding their neighborhoods with foreigners.

If this man were an authentic ethnopluralist and his intention would be true diversity, he would support the protection of every people in their own respective cultures rather than flooding Europe with hostile immigrants, because right now birth rates are so low and immigration levels so high that the very existence of all European peoples is at stake.

5 reasons why FransTimmermans of the EU is a Dangerous Lunatic.

Posted by Daniel Thomas at 4:32 PM