Tommy Robinson And The War Against The White Working Class 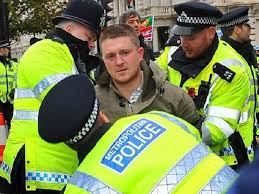 The arrest and jailing of citizen journalist Tommy Robinson has ignited a storm of protest across the planet that no one expected. This is particularly true of the British ruling elite and their agents in the establishment whose continuing harassment of Mr. Robinson has become an obsession.

The burning question is this: with the well-publicized collapse of law and order in Great Britain, especially in blood-soaked and terrorized London, why does an inarticulate working-class rogue from Luton scare the ruling elite so much they go to such lengths to remove him from circulation?

To understand the reason, one must go back to the election of The Iron Lady, Margaret Thatcher, back in 1979. Up to that point the ruling elite were progressing with the managed decline of Great Britain in preparation for its absorption into the long planned centrally controlled, borderless European Union superstate.

To the horror of the big government tax and spend establishment Mrs. Thatcher was a staunch advocate of free market economics and individual liberty and to add to their consternation she despised the European Economic Community (the precursor to the current EU) and refused to accept that Great Britain’s glory days were over.

The rise to power of Mrs. Thatcher halted the managed decline of Great Britain and set back the EU superstate project for decades. The visceral hatred of Mrs. Thatcher continues unabated to this day even inside her own Conservative Party.

The psephologists and political scientists have concluded that the white working class, including millions of trade unionists, were the socio-economic demographic that was responsible for her rise to power and for her remaining there for three consecutive general elections. During her eleven years in power she halted the managed decline of Great Britain and put back the European Union superstate project a generation.

The ruling elite and the establishment are tantalizingly close to their EU superstate objective and will not allow the white working class to halt it a second time. It was some EU bureaucrat, I forget which one, opined that because the electorate cannot be trusted to vote the right way we should change the electorate, or words to that effect. (The Brexit referendum and the election of President Trump proved him correct but I digress)

As the world can see they have set about replacing the white working class as electoral power brokers with ruthless efficiency using a combination of cultural replacement via mass immigration into working class areas and imposing a regime of rigidly policed political correctness and intimidation in order to close down any dissent.

To further alienate the white working class, the politicized institutions, including the police‘service’ and the judiciary, show deference and leniency to the immigrant population and their criminal excesses, especially those from third world Islamic countries. This has enraged to boiling point not only the white working class but all those who believe in British values and justice.

Because of his refusal to be intimidated into silence by the establishment and their agents in the police 'service', Tommy Robinson has become a symbol of the much-abused white working class and a hero who is refusing to accept what is being done to his country and is fighting back.

The ruling elite will not allow him to become a rallying point or allow his resistance to gather momentum, hence his removal from circulation until, they hope, the news cycle moves on.

In his haste to get Tommy Robinson out of circulation as quickly as possible and impose a media blackout, Judge Geoffrey Marson QC didn't even bother to follow due process. (See here) 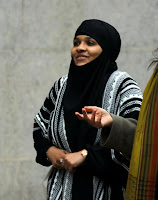 Another of Judge Marson's and Judge Byrne's fellow political activists, Judge Christopher Moss QC, spared from prison an ISIS supporter, Farhana Ahmed, who encouraged terror attacks in Great Britain because she had five children and he was 'moved by their suffering'. (See here)

The ruling elite and the establishment would rather destroy democracy and the centuries old British traditions of individual liberty, equality under the law and freedom of speech than put their beloved EU/cultural replacement project in jeopardy.

Tommy Robinson rotting in jail is fair game for these establishment fanatics and a small price to pay to progress their cultural replacement agenda.

Lets hope this is the last straw for the British people and the fight back begins in earnest.

Posted by Daniel Thomas at 8:21 AM No comments: