The admission by Sir Trevor Phillips, the former Chairman of the Equality and Human Rights Commission (EHRC), that he got it wrong about the compatibility of Islam and British society should not be accepted as a mea culpa since the consequences of his so-called mistake were deadly serious. The truth is that Phillips played his part in the deliberate foisting of Islam on the British people with the dedication and skill worthy of any other politician dedicated to a long planned agenda.

Trevor Phillips is supposedly and intelligent man, grammar school educated with a BSc degree from Imperial College, London and yet he was not smart enough look at the horrors of contemporary Islamic societies around the world and it's 1,400 year history of violence and conquest and come to the obvious conclusion that Islam is not compatible with modern, western societies.

The incompatibility and backwardness of Muslims and Islam has been written about for centuries including by Britain's greatest Prime Minister, Sir Winston Churchill who observed back in 1899 and noted in his book The River War:

"How dreadful are the curses which Mohammedanism lays on its votaries! Besides the fanatical frenzy, which is as dangerous in a man as hydrophobia in a dog, there is this fearful fatalistic apathy. The effects are apparent in many countries, improvident habits, slovenly systems of agriculture, sluggish methods of commerce, and insecurity of property exist wherever the followers of the Prophet rule or live.

A degraded sensualism deprives this life of its grace and refinement, the next of its dignity and sanctity. The fact that in Mohammedan law every woman must belong to some man as his absolute property, either as a child, a wife, or a concubine, must delay the final extinction of slavery until the faith of Islam has ceased to be a great power among men.

Individual Muslims may show splendid qualities, but the influence of the religion paralyses the social development of those who follow it. No stronger retrograde force exists in the world. Far from being moribund, Mohammedanism is a militant and proselytizing faith. It has already spread throughout Central Africa, raising fearless warriors at every step; and were it not that Christianity is sheltered in the strong arms of science, the science against which it had vainly struggled, the civilization of modern Europe might fall, as fell the civilization of ancient Rome".


Anyone unfamiliar with this quote will note the parallels between Islam and Muslims of Churchill's day with those of today but somehow Sir Trevor Phillips missed it and proceeded to give cultural and moral equivalence to an obviously backward cult.

Under his politically correct regime at the EHRC and the agenda driven political elite, quoting from The River War in public will lead to arrest by the politicized 'police service'  for religious and racial harassment. (See here)

Maybe Phillips should have listened to our new friend and ally Recep Erdogan, the Prime Minister of Turkey and take his word for it when he states that "The term 'moderate Islam' is ugly and offensive. There is no 'moderate Islam'. Islam is Islam".

Ignoring the fact that the British people were never consulted, let alone consented to the replacement of their ancient culture with a so-called 'multi-cultural society', Phillips laid the blame for the segregation of Muslims on the British people themselves. It was Phillips who invented the crime of 'Islamophobia' which was used as a tool to smear and demonize anyone who questioned the policy of third world Muslim immigration.

Now he is admitting what everyone else has known for generations - that "Muslims are not like us and we should accept that they will never integrate".

The current political elite are fighting a rearguard action against the onset reality and persisting with the narrative that sharia controlled Muslim ghettos don't exist and in the words of Great Britain's thoroughly discredited Prime Minister, David Cameron, that  "Britain is one of the most successful multi-racial, multi-faith, multi-ethnic countries in the world".

Why Sir Trevor Phillips is coming out with the truth at this point in history is not immediately apparent but he must take responsibility for his part in the misery that has been caused to the many victims of the medieval practices that have been forced upon the British people by his organization and the government.

Phillips is nothing other than an apologist for Islam and those who follow this backward cult. Consequently, because of his complicity, tens of thousands of young underage white girls have been groomed, subjected to horrific sexual abuse, rape and sex slavery by Muslim men with the knowledge of his organization.

Because of his complicity thousands of young girls are being subjected to female genital mutilation (FMG), also stripped of their basic human rights thousands of Muslim women are being routinely abused by their spouses.

In addition to these horrific practices, child marriage, polygamy, honour killings, sharia law and beheading are now familiar words in the daily lexicon of British life.

Thanks in part to Sir Trevor, the proliferation of welfare financed, sharia controlled Muslim ghettos are hotbeds of radical Islam and a recruiting ground for ISIS and Al Shabaab terrorists who are waging jihad abroad and in the not too distant future will be waging it at home.

Despite being only some 3 million strong the other 61 million British citizens are being forced to accept medieval practices and to accede to every demand made by this most indulged minority.

As mentioned earlier, thanks to Sir Trevor and his invented crime, anyone who utters opposition to any of this agenda is smeared as an Islamophobe and liable to prosecution for racial or religious harassment.

In conclusion, it's worth adding that if any mortal plebeian from the lower orders admitted a mistake of this magnitude that had caused such misery and destruction they wouldn't be rewarded with a TV documentary program but a prison sentence.

It's my view that Sir Trevor Phillips should be stripped of his Knighthood, drummed out of public life and live out his days in one of the Muslim ghettos he himself was instrumental in creating. 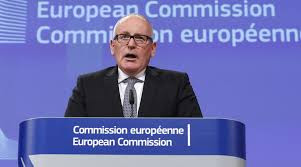 As the people of the world are witnessing with their own eyes the nation states of Europe are being irrevocably changed for the worse and their Judeo-Christian cultures slowly erased by open border mass immigration. What the world may not know however, is that this is not the result of civil wars or compassion toward refugees fleeing for their lives.

In a rare fit of candour out of character with the usual pre-programmed propaganda from EU bureaucrats, the Vice-President of the European Commission, Frans Timmemans, has confirmed what informed people knew already; that this is part of a long planned agenda to erase the centuries old civilizations of the nation states of Europe, along with their white Judeo-Christian cultures, replacing them with so called 'multi-cultural societies'.

"There is not going to be, even in the remotest places on the planet, a nation that will not see diversity in it's future", says Mr. Timmermans.

To remove any ambiguity he goes further:

It couldn't be better articulated that this is part of the long planned UN agenda for the entire planet including the United States of America.

Listening to Mr. Timmermans speech and reading the transcript puts the current actions of German Chancellor, Angela Merkel, the British Prime Minister, David Cameron and the rest of the EU into perspective. More importantly for the American people it puts the actions, and lack of action in some instances, of the Obama administration and the US Congress into perspective.

Now the American people will know why their politicians refuse to control the borders, why they refuse not only to deport illegal immigrants but actively encourage more of them with all the benefit entitlements and constitutional protections that are available to legal residents and citizens.

It should also help them to understand why their political leaders continue to insist on mass immigration from the undeveloped world, including hot spots like the middle east and Africa, even though some immigrants from these places are a clear and present danger to the people.

It also goes some way to explaining why American blue collar workers are being replaced by imported counterparts from the third world using the H1B visa system. It's not just cheap labour and corporate profits at play here.

Now they should know why President Obama and the US Congress continue with the 'nation of immigrants' narrative and continue to redefine American values and who they are as a people.

Frans Timmermans is not just any politician from a fringe party shouting on the sidelines to get attention for an extreme agenda; he is the Vice-President of the European Union who wields immense power over 500 million people. By virtue of the fact that he was appointed and cannot be removed by popular vote the power he wields is absolute and cannot be challenged.

If this speech was made by any other politician outside the global political elite all hell would break loose. The media would indulge in a frenzy of name calling and labeling with all the favourites being thrown around with abandon. Racist, Fascist, Bigot and Nazi would return as household words, with the words holocaust, 'cattle trucks' and 'gas chambers' being employed to embellish the mental images further.

Frans Timmermans is not acting in isolation of course; the fingerprints of the UN de facto world government are all over it.

In October 2010 German Chancellor, Angela Merkel made a speech to her Christian Democratic Union Party highlighting the fact that attempts by the state to impose multi-culturalism onto the German people had "utterly failed'. (See here)

Likewise, in February 2011 British Prime Minister David Cameron made a speech to the Munich Security Conference highlighting the fact that attempts by the state to impose multi-culturalism on the British people had failed. (See here)

In complete contrast to this Cameron stated in response to accusations that Great Britain is infested with semi-autonomous Muslim ghettos governed by sharia law that "Britain is one of the most successful multi-racial, multi-faith, multi-ethnic countries in the world".

So what happened to change their minds so quickly and so dramatically?

In 2012, the UN Special Representative for Migration, Peter Sutherland, made a tour of European legislatures, including the Westminster Parliament, reiterating the UN policy of cultural replacement for the white Judeo-Christian countries of Europe. The representative of the UN global elite spoke and the European political class obeyed to the letter. (See here)

(If there is ever a competition for the most evil, destructive men on the planet, Timmermans and Sutherland would be top contenders.)

As the world has witnessed after Sutherland's intervention, Great Britain, Germany and the rest of the EU opened their borders to even more millions of third world economic migrants, including young male Muslims who have proceeded to sexually assault, rape and murder western women and young boys without serious interference from the governments involved.

Indeed the various EU governments are now censoring news of these heinous crimes and continuing to insist that it's nothing to do with Islam or the economic migrants from the undeveloped world inorder to prevent a backlash. Aiding and abetting these governments are compliant social media giants, such as Facebook and Twitter.

It must be noted that this agenda to impose diversity by the UN/EU political elite is the deliberate destruction of the centuries old white Judeo-Christian cultures of the world and their replacement with alien cultures is classed as genocide according to the UN's own criteria.

Furthermore, in conclusion, this genocide is being imposed by unelected, professional bureaucrats such as Timmermans and Sutherland who cannot be removed from office by the people who will be most affected by this disaster without consultation and without their consent.