Voting Is Useless - Riot, Loot and Burn to Get Things Done 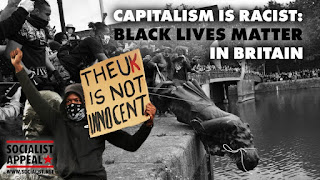 On June 23rd, 2016 in the biggest democratic exercise in their history the British people voted overwhelmingly to leave the European Union and all its institutions.

Since that historic vote, the political class and the establishment elite have used every trick in the book to ignore and eventually overturn that result. Over four years later the British people are still shackled to the corrupt and failing political union and subject to its rules, regulations, and Court of Justice.

The unelected European Union bureaucrats still control Great Britain’s borders and the resources contained in her territorial waters; for this subjugation, the British taxpayers are forced to hand over billions per year for the privilege.

Similarly, the political class has ignored for decades the calls from the British people to stop the open border mass influx of incompatible, third world migrants that has blighted their lives and to end the foreign aid madness which sees billions of taxpayers’ money fire hosed at corrupt national governments abroad while millions are suffering hardship at home.

One is bound to ask what it will take for the establishment elite to listen and act on the wishes of the British people, especially those politicians who have been elected into office to do just that.

It is not that politicians and the establishment elite are incapable of taking draconian measures when it suits them or their agenda to do so. After all it only took the death of a career criminal thousands of miles away in another country on another continent and the subsequent rioting, looting and burning, for them to start rewriting centuries of British history and removing its symbols and memorials.

Suddenly the demands of a recently formed neo-Marxist political organization from America are being acted upon with uncharacteristic zeal while the decades old demands of the British people are still being studiously ignored.

The deliberately misnamed Black Lives Matter (BLM) have got the politicians and the establishment elite going down on bended knee to support their Marxist agenda while the British people have begged for decades for them to get off their backsides and act on their demands but without success.

Without consulting the British people, BLM and their treacherous anti-British co-conspirators are now rewriting British history and ordering which statues and memorials must be removed. Nothing is sacred, not even the Cenotaph in Whitehall or the statue of Sir Winston Churchill in Parliament Square, both of which have been defiled and vandalized. 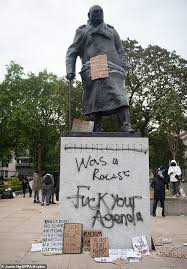 It is ironic, and a national embarrassment, to watch senior police officers going down on bended knee to support a neo-Marxist organization that wants them defunded as a prelude to abolishment.

It’s also ironic to watch the Archbishop of Canterbury, Justin Welby, support this same neo-Marxist organization that would abolish the church, confiscate its wealth for redistribution, and if past precedent is anything to go by, put him in the gulag or up against a wall and shot.

In a further concession to BLM the Archbishop has also decided that depictions of Jesus as white must be changed ignoring the fact that as a man, He was an Israeli Jew who are predominantly white.

Multi-millionaires from all walks of life, including sports men and women, are going down on bended knee to support BLM whose central tenet is the replacement of the capitalist system which facilitated the creation of their wealth with a Marxist one that will strip them of it.

In addition to these horrors, BLM also want to replace the nuclear family with LGBTQ+ as the foundation of western society.

The indecent haste with which the politicians and the establishment elite have acted upon the demands of a foreign revolutionary, neo-Marxist political organization makes one wonder if this was a long, meticulously planned operation waiting until its operatives were in place and the time was right before using an obscure incident abroad to trigger their revolutionary actions at home.

It’s not credible that the death of a very unpleasant career criminal, albeit in cruel circumstances, in America would lead within weeks to the total revision of British history and the removal/destruction of emblems, memorials and statues of historical figures from Oliver Cromwell to Sir Winston Churchill and even of Jesus Christ Himself.


Credit to this stunning opening monologue from Tucker Carlson