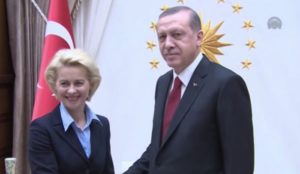 It was Great Britain’s wartime leader, Winston Churchill, who noted that “An appeaser is one that feeds the crocodile, hoping it will eat him last”.

This quote is proving to be true by the appeasement yet again of Turkey’s radical Islamist President, Tayyip Erdogan, by the leaders of the European Union.

Apropos the recent news that Erdogan is shaking down the EU leaders again by threatening to open the borders and flood Europe with refugees and migrants, the predictable conclusion has been reached.

Reminiscent of Barack Obama's appeasement of the Ayatollahs', the cowardly EU leaders have caved in and agreed to pay the radical Islamic autocrat another five hundred and sixty-seven million dollars, (that’s $567,000,000), on top of the six billion+ dollars they handed over in 2016, for the same scam.
When one considers that the U.N. is pouring money into Turkey, along with individual nations and any number of refugee agencies, the Turkish tyrant is making a killing by hosting refugees and migrants.

European taxpayers can rest assured that the Turkish tyrant will be back for more when this current half a billion runs out and he needs more military hardware or money to oppress an increasingly restless domestic population.

If the EU leaders put the well-being of their people before their nation building agenda the solution is simple and cost effective. Also, it would save hard pressed EU and global taxpayers a king’s ransom (pun intended)

Following their own precedent, the U.N, in conjunction with the EU, should build an impenetrable buffer zone along the Greece/Turkey border replicating the demilitarized buffer zones they have previously built across Cyprus and the Korean peninsula.

They have the expertise, the money and most importantly they have the support of most of the European people who have had to suffer the horrific consequences of continued mass immigration into their already blighted countries.

The buffer zone would be accompanied by a naval blockade of the Aegean sea lanes between Turkey and Greece to protect the vulnerable and already devastated Greek islands.

Unfortunately, the globalist leaders of the U.N. and the EU are not in the habit of listening to or acting on the wishes of the people.

The Danegeld being paid to Erdogan is a fig leaf to give the impression they are listening to the people and actually doing something.

In line with their belief in a multi-cultural, borderless world they will carry on with their cultural replacement agenda by encouraging mass immigration into Europe from the Middle East and Africa using alternative Mediterranean routes through Malta, Italy, Spain etc. regardless of the damage and misery it causes.

As an example, Great Britain is not even in the the EU Schengen zone but despite years of promises by successive governments to reduce it, the latest figures show immigration is at the highest levels ever.

As for the refugees and economic migrants already encamped in Turkey; a solution is equally simple:

Begin with dispelling the notion that Europe and the USA are the only possible destinations for refugees and migrants especially those from the Islamic faith who are incompatible with the Judeo-Christian culture and way of life of their hosts.
Instead of transporting tens of thousands of people across the entire breadth of Turkey, Europe and the Atlantic Ocean, they should be transported south through Jordan to their spiritual home in oil rich Saudi Arabia and onward if necessary to the equally rich Islamic countries of Kuwait, Oman and the United Arab Emirates. 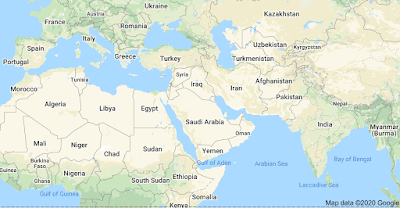 Alternatively, they can travel east to their co-religionists in Iran or though Nakhichevan and the Armenian corridor to the Muslim majority countries of Azerbaijan, Turkmenistan, Uzbekistan and the other Muslim majority former Russian republics.

To conclude: Led by the fanatical German Europhile, Angela Merkel, EU leaders opened the borders and invited all and sundry to enter Europe with disastrous consequences for the people. This insanity led directly to Brexit and the rise of nationalist parties across the bloc.

Combined with the imminent collapse of the Eurozone economies, Brexit and the rise of nationalism has put the entire European nation building project in jeopardy and along with it the source of unlimited power for Chancellor Merkel and the EU leadership..

The Turkish tyrant, Tayyip Erdogan, has spotted this opportunity to blackmail the EU leaders by threatening to overwhelm the EU borders with hundreds of thousands of refugees and migrants unless they pony up massive sums of money.

Unless the EU leaders take drastic action as suggested above, Churchill’s crocodile will keep returning time and again until there is no money left and they themselves are devoured.

“Appeasement. It’s a slippery slope” ……..”It means you want to work with the enemy. It means you’d rather join him than beat him”. – Patrick Ness.

Posted by Daniel Thomas at 8:05 AM No comments: 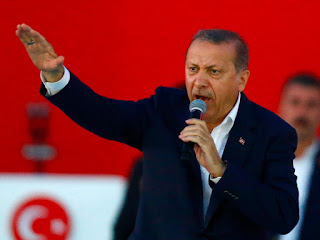 Despite being a NATO ally, Turkey is no friend of western Judeo-Christian civilization and less of a friend since the Islamist autocrat, Tayyip Erdogan, assumed power in Ankara.

Using membership of NATO as a shield, Erdogan is provoking the Russian bear in Syria hoping that NATO members will come to his aid should Putin tire of his provocation and attack. At the same time, he is deliberately destabilizing the European Union by transporting masses of economic migrants and Syrian refugees to the borders of Greece and Bulgaria and assisting them to destroy border defenses and cross into Europe illegally.

The migrants regard crossing these borders as the gateway to other EU member states and a plethora of welfare benefits which include free housing, healthcare, education and money. Unfortunately, some testosterone fueled young men among the migrants have an ingrained attitude toward western women who they believe are theirs for the taking with disastrous but predictable consequences.

Bearing the brunt of this invasion is Turkey’s ancient enemy, Greece, especially its islands in the Aegean Sea whose peaceful existence and way of life is being destroyed by the mass influx of incompatible, mostly male migrants who have no respect for the host nation and no intention of integrating.

Incidentally, Turkey claims sovereignty over many of these Greek islands which is giving the inhabitants increasing cause for concern bearing in mind the Turkish invasion of Cyprus and the colonisation of the northern half.

This transportation of migrants across Turkey to the EU borders should not be interpreted as a humanitarian gesture by Tayyip Erdogan. His Islamist zeal to conquer in line with Koranic demands renders him incapable of humanitarian behavior. 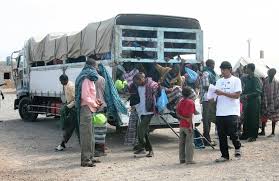 Firstly, to blackmail the European Union using a promise to keep the refugees and migrants in Turkey if they pony up tens of millions of Euro’s in cash and allow access to their single market.

Erdogan is also demanding free movement across EU borders for 70 million Turks which despite a willingness of the EU leaders to agree they know it would be unacceptable to the people of Europe and would fuel the rise of nationalist parties who would agitate to leave the bloc.

(The United Nations are also giving billions to Turkey to house migrants so if they stay it’s a double win for Erdogan, but I digress.)

Flooding the EU border areas with migrants is a tried and tested extortion scam which Erdogan has employed previously with great success. Until the indecisive and cowardly EU leaders take effective action this demand for Danegeld will continue along with the misery of the Greek people and the destruction of the Aegean islands.

Secondly, Erdogan aims to achieve the long-term objective of Islamists down the ages to conquer Europe and subjugate the continent to Islam. Europe and the west must not harbor the illusion that Tayyip Erdogan is man they can do business with, he is not. He is a self-confessed radical Islamist who does not believe there is such a thing as moderate Islam. In fact, he is on record as saying he is offended by the term.

He is also on record telling Muslims that Europe belongs to them and they must migrate and out breed the host populations. This is the same sentiment that was expressed by Libyan dictator Muammar Gaddafi who proclaimed that the open border, mass immigration agenda of the EU will allow Muslims to conquer Europe without a shot being fired.

Bearing in mind that Greece is mired in debt and in no position to deal with this malevolent invasion of one of the EU’s external  borders one would think that they, and the UN, would come to the aid of the blighted Greek people.

True to form, and to the surprise of no one, both institutions are siding with the migrants. They are refusing to seal both the land border between Greece and Turkey and the Aegean Sea lanes to prevent a seabourne invasion by migrants of the Greek islands.

Both these globalist institutions have reminded the Greek government that they must admit asylum seekers knowing full well that the vast majority of those infringing the border are economic migrants that don’t qualify for asylum.

To conclude; by paying Danegeld to keep the migrants in Turkey, the duplicitous EU leaders are giving the impression that they are protecting the Greek people from the migrant invasion while at the same telling them they must admit the migrants to comply with so-called EU values and asylum laws.

This allows Erdogan to interfere in Syria to fight the Kurds and destabilize Europe by playing all sides against each other while meeting his two objectives of extortion and conquest at the same time.

Europe must not fall victim to Erdogan's migrant blackmail

'You Are the Future of Europe', Erdogan Tells Turks

Greece warned by EU it must uphold the right to asylum

U.N. Says That Greece Has No Right to Stop Accepting Asylum Requests

Posted by Daniel Thomas at 5:58 PM No comments: