Impeachment, President Trump and a Warning for Boris Johnson 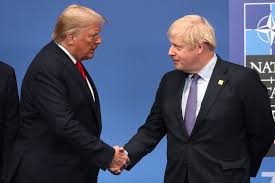 It wasn’t supposed to happen this way. The plan was for Hillary Clinton to win the 2016 presidential election and complete the fundamental transformation of America into a one-party socialist state which was progressed to the point of success by that mysterious Senator with no background, Barry Soetoro.

Known to the world as Barack Obama, he and his handlers packed America’s most powerful and respected institutions with dedicated apparatchiks and nomenclature that would ensure the fundamental transformation, or seizure of power, was efficient, unopposed and could never be reversed.

With deep state operatives in position at the top of the Federal Bureau of Investigation, the Central Intelligence Agency, the Department of Homeland Security, the Department of Justice, the Internal Revenue Service, etc. all that was required was for Hillary Clinton to win the presidential election.

A victory for Clinton would have been followed by an amnesty and voting rights for the tens of millions of illegal immigrants; this combined with open borders would ensure Democratic Party government and a socialist society in perpetuity.

With ninety-five percent of the mainstream media on her side and a generation of dumbed down, brainwashed millennials mobilized in support, she lost to a dynamic patriotic businessman whose solemn promise was to put the American people first and Make America Great Again.

Unfortunately, the deep state was still in place after the inauguration, including inside the White House, and it was determined to use its power to overturn the result of the election and remove President Donald Trump from office.

The rest is history. The Mueller investigation into Russian collusion, which was supposed to remove President Trump from office, was a spectacular failure which crashed and burned in full view of an incredulous world.

Next came the rigged impeachment circus which instead of exposing President Trump of threats and bribery against the Ukrainian President, exposed the Obama/Biden administration as the perpetrators of the crimes.

This also crashed and burned and at the time of writing it has failed to remove President Trump from office.

In the meantime, America’s enemies inside the Congress have stopped at nothing to prevent President Trump from governing the country and fulfilling the mandate he was given by the America people.

This attempt at overturning the result of a democratic election is not unique to America. The British version of the deep state has mobilized its embedded apparatchiks and nomenclature to overturn the result of the 2016 referendum on Great Britain's continued membership of the European Union (EU).

In the biggest democratic exercise in the history of Great Britain, and despite a hostile media and the combined forces of the British and EU establishments, the people voted to leave by a huge majority.

The Europhiles even invited the now divine Barack Obama to interfere in the referendum by issuing threats about trade which to their credit the British people ignored and still voted to leave.

The British people’s desire to leave the corrupt and failing EU was confirmed by the 2017 general election where both major parties promised to implement the result of the 2016 referendum.

The political class were lying, they reneged on that promise. They are totally and utterly dedicated to their decades long project to replace the independent nation states of Europe with a single, centrally controlled superstate, run by appointed bureaucrats in the new post democratic age.

Like the deep state in America, the deep state in Great Britain is doing everything in its power to overturn the result of the 2016 Brexit referendum including corrupting Parliament as well as the law courts and every other institution of power and influence.

At this point in history the deep state have succeeded. The British people are still trapped inside the EU and remain subject to its laws and diktats some three and half years after they voted to leave. There is no prospect of them leaving until the end of 2020 or possibly 2022.

If the EU use the power they have been granted under the internationally recognized treaty called the  Withdrawal Agreement and Political Declaration they can prevaricate indefinitely.

This brings us to the newly elected Prime Minister, Boris Johnson. The mandate he has been given couldn’t be clearer, the British people want out of the EU and he has promised to deliver. However, the fanatical Europhiles in the deep state and the institutions are still in position and as determined as ever to prevent Brexit.

If he wants to avoid the slow motion coup d’état being endured by President Trump, Prime Minister Johnson needs to identify and purge the establishment and the institutions of the deep state operatives that will use everything in their power to prevent Great Britain’s independence from the long planned United States of Europe.

To conclude, in the recent general election the British people showed their anger at the political class by purging Parliament of some of the worst Europhiles who reneged on their promise to deliver Brexit and Boris would do well to do the same with the establishment and the politicized institutions.

A sudden but long march through the institutions is essential if Boris is to deliver on his mandate to leave the corrupt and failing EU. In this radical move he would be supported by the freedom loving British people who are yearning for their independence after four decades of subjugation to the EU and the malignant bureaucrats that rule it.

Posted by Daniel Thomas at 4:10 PM