Afghanistan Sell-Out And The British House Of Hypocrisy 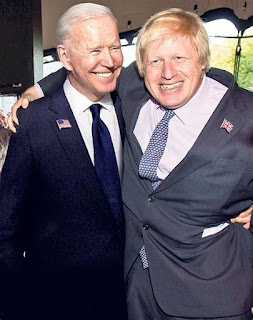 Sanctimonious doesn't begin to describe those British Parliamentarians who rejoiced at the removal of President Trump and his America First agenda and welcomed Joe Biden as the saviour of their globalist agenda.

Those of us who followed the 2020 Presidential campaign knew from the start that candidate Joe Biden was a cognitively compromised, mumbling shell of a man who was totally unsuitable to be President of the United States of America and leader of the free world.

Even if he wasn't cognitively compromised his record of corruption, racism, plagiarism and outright lying throughout his forty-eight years in Congress and the White House should have precluded him from the race.

The 2016 election of Donald J Trump and his anti-globalist policy of America First was greeted with horror and dismay by politicians and globalists, not only in America and the United Nations, but around the world.

That included the British Parliament who had ceased putting the British people first decades earlier in favour of open borders, multiculturalism and integration into a single European state governed by appointed bureaucrats in a post democratic age.

As a precursor to the America First agenda of candidate Trump, the British people defied Parliament and the Establishment by voting in a referendum to put Great Britain first and leave the nation building EU project to become a sovereign, self governing nation once again.

Known universally as Brexit, this was going to be such a bitter blow to the globalist One World project that President Barack Obama and his Vice-President Joe Biden, were drafted into the referendum campaign to threaten, bully and blackmail the British people into voting to remain in the EU.

To their credit the British people stood firm and voted for Brexit regardless. It was noted that the unwanted intervention of Obama and Biden into a purely internal British matter convinced some Europhiles to change their vote from Remain to Brexit in disgust.

Even after Brexit, VP Joe Biden continued with threats of being sent to the 'back of the line' for a US/UK trade deal if Great Britain dropped the controversial Northern Ireland Protocol.

(This Protocol kept Northern Ireland subject to EU control via the Single Market and Customs Union thus splitting it off from the rest of the United Kingdom).

Candidate Trump, and later President Trump, made no secret of his support for Brexit and his contempt for supranational bodies such as the EU and the UN. This attracted the opprobrium of the pro-EU British Parliament to such a degree that he was not invited to address both Houses despite the communist tyrant President Xi of China being invited to do so during his State visit.

All sides of the British Parliament rejoiced when the deep state removed President Trump from office and installed the sad remnants of what used to be Joe Biden as their puppet in the White House.

Incidentally, this is the same Chris Bryant, that in an act of shameless grovelling, nominated candidate Joe Biden for the Nobel peace prize for, quote:

"When American cities have been in flames and citizen has been pitched against citizen, Joe has been a calming influence to bear.

When others have resorted to violent solutions, he has argued that the best force is the force of arguement because guns can stop a heart but well placed words can change many hearts and many hearts can change the world".

Not only is this puke-making sychophancy, it is also false. It was Biden supporting Antifa and Black Lives Matter that rioted, looted and burned all summer long while Joe was kept hidden from the media by his handlers. He would emerge briefly each morning to read a pre-prepared campaign statement off a teleprompter before being hustled back into hiding using Covid, not senility as an excuse.

One would have thought that after his support for Brexit and some glowing personal accolades, Boris Johnson would have at least used his discretion and not insulted former President Trump at the first opportunity and on the world stage.

Despite Joe Biden shambling around in a daze mumbling incoherently, Boris Johnson described him as 'a breath of fresh air' at the meeting of the G7 leaders in Cornwall, England and promised to work with him on common issues like security, projecting our values around the world and, yes you guessed it, the so-called climate emergency.

What a difference two short months makes. Despite his cognitive decline and obvious senility, these same Parliamentarians have forgotten their sycophancy and jubilation, the 'breath of fresh air' and the return to normalcy of their globalist foreign policy and censured their hero for his hasty, unilateral and disastrous retreat from Afghanistan. 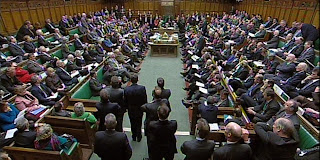 So much for working together on security and projecting Anglo-American values around the world. Heaven help us when these two work together to tackle the mythical climate emergency.

To conclude, the British Parliament, the misnamed Mother of Parliaments, is inhabited by weak, low quality individuals who are so lacking in leadership skills they allowed themselves to be seduced like star struck schoolgirls by Barack Obama, a shallow mixed race nonentity who fronted for the globalist cabal before cowering before President Trump, a real leader who took them on singlehandedly.

These low quality individuals couldn't handle an energetic President who worked tirelessly on behalf of the American people instead of the malignant globalists whose agenda was not in their interests.

In their weakness and desperation they supported the accession of a senile shambling wreck who was nothing but a corrupt, career politician with no accomplishments other than to make racism, plagiarism and outright lying acceptable tools to use in the pursuit of political power and the riches it would bring to himself and his family.

Boris Johnson assumed that Biden's mental demise would be much easier to deal with and would allow him to grandstand on the world stage without playing second fiddle to a true leader.