Listening to the speech given by President Obama during his first visit to a mosque on American soil, one would be forgiven for thinking that he either genuinely believes what he is saying or he is indulging in a cynical campaign of historical revisionism in order to present the world's most indulged special interest group with a more benign image for 'fundamental transformation' purposes.

It could also be true what has been suspected since his appearance on the political stage; that his exposure to Islam during his formative years growing up in Indonesia has made him a sympathiser if not an actual adherent of this medieval so called religion.

His written and spoken word consistently extolling the virtues of Islam - while also being quick to absolve its adherents from guilt for the murder and mayhem they are visiting upon the planet - certainly lends credence to this point of view. In all probability it's a combination of all three. 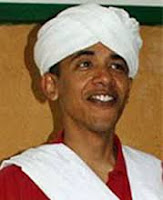 It makes it difficult to come to any other conclusion when the President expresses the sentiment that he "will stand with the Muslims should the political winds shift in an ugly direction" or when he unashamedly proclaims before the entire world that "the future must not belong to those who slander the prophet of Islam".

Obama's proclamation on who the future must not belong to was delivered at the UN and is aimed exclusively at non Muslims; therefore it is safe to assume that in his opinion the future must belong to those who slander and murder the followers of the Christian Messiah and the Jews and who's prophet, Mohammad - No Slander Upon Him (NSUH) - orders their enslavement or beheading.

Looking at current world events it's an order that is carried out with ruthless dedication by millions of the Muslim faithful worldwide.

Judging by his speech President Obama must also be assuming that the audiences outside of the mosque are blissfully unaware of the rape, death and destruction being wreaked upon Christians, Jews and other infidels by Muslims across the planet from the Philippines in the east to Nigeria in the west, not to mention inside the United States itself.

It must be noted at this point that Muslims have been relentlessly wreaking death and destruction on each other in an internecine bloodbath since their prophet Mohammad's (NSUH) death in the year 632 AD over whether his father-in-law or his son-in-law was his rightful successor.

As with every action and utterance by the UN/EU controlled political order in the USA and Europe, President Obama's visit to a mosque was the result of a political calculation and was meticulously choreographed to further advance the 'fundamental transformation' agenda.

By analysing the actions and rhetoric of the ruling political order in both America and Europe it becomes abundantly clear that Islam and it's adherents are being used as a battering ram for the ongoing generational project to re-order the post war world. This consists of ending the global leadership of white Europeans of a Judeo-Christian heritage and their diaspora despite the fact that it is their leadership that is responsible for the advances of civilisation which has benefited mankind.

The President's conciliatory speech was an echo of the speeches given by the various Presidents and Prime Ministers of Europe with regards to the portrayal of Islam as a 'great global religion of peace' which is morally and religiously equivalent to Christianity. At the same time the mantra that "it's nothing to do with Islam" absolves their Muslim clients from their blood soaked murderous rampage across the planet which they carry out in the name of Allah, as demanded by their prophet Mohammad (NSUH) and as written in their holy book, the Koran.

The British Foreign Secretary, Theresa May, was quick to assert that the Muslim slaughter of the innocents in Paris was "nothing to do with Islam" but even that pales into insignificance compared to the ignominious apologist rant of Mayor Jim Kenny of Philadelphia after the attempted assassination of a police officer in one of his precincts.

Despite the perpetrator dressing in a traditional jihadi robe and quoting the Koran, and admitting on tape that he attempted to murder Officer Jesse Hartnell in the name of Allah on behalf of ISIS because the officer enforced a law that was not shariah, Mayor Kenny obediently ranted that it was 'nothing to do with Islam or the teachings of Islam'.

He outdid his own imbecility when he added after the police confirmed that it was everything to do with Islam; "That is abhorrent. It's just terrible and it does not represent the religion in any way shape or form or any of it's teachings".  See the unedifying spectacle here.

Rewriting history is a vital part of the 'fundamental transformation' project and it is being progressed by President Obama with his continuing efforts to redefine American values and who they are as a people.  This has been taken to ever more risible lengths with his assertion that Islam 'is woven into the very fabric of American society and it's founding' having been introduced by African slaves.

Nonsense of course since no Muslims were ever involved with the Founding Fathers or the framing of the Republic's founding documents or the establishment of the Constitution after independence from Great Britain.

Despite the efforts of domestic enemies to prove otherwise and erase Christianity from the land, one only has to glance around to note that the United States of America remains a country founded on Judeo-Christian principles.  It was these principles that provided the moral compass that helped make the American people the most prosperous, generous and free people on earth.

The truth is that less than 10% of African slaves were Muslims, the majority being adherents of local tribal customs including shamanism. Slave descendants today are overwhelmingly Christian with many of their leaders bearing the title 'Reverend' even though their attitude to white people leaves a lot to be desired.

Domestic Islam is confined to a minority of racist bigots, many of them converts, such as the Nation of Islam and its vile leader Louis Farrakhan. More dangerous is the influx of Muslims from the developing world many of whom have been radicalised from birth. Radicalisation includes a visceral hatred for traditional America along with its people, its values and its way of life preferring instead to live under the medieval barbarism of sharia law.

The ominous part of the President's speech which should fill every freedom loving American with foreboding was the insinuation that 'hateful rhetoric' and 'bigotry' is rife among non Muslims which continues the theme that Muslims are victims as opposed to the perpetrators of hateful rhetoric, hate crimes and outright murder.

This is a precursor to Obama banning any criticism of Islam, a blatant attack on the 1st Amendment, and which is already being planned by the UN/EU for incorporation into international law.
(UN Resolution 16/18 here)

Muslim rape and sexual assaults are already censored in many European countries including Sweden and Germany. (See censorship story here)

This kind of historical revisionism has simultaneously been adopted by European leaders including Great Britain's David Cameron and Germany's Angela Merkel providing proof, if any were needed, that there is a concerted effort organised by the UN/EU elite to impose Islam onto white European, Judeo-Christian civilisations with a view to eroding their power and influence to zero.

While Cameron and Merkel are doing this because they have sworn fealty to the UN/EU and their agenda to re-order the post war planet, Barack Obama appears to be doing it to fight the good fight for Islam and to keep the faith as well.