President Xi Jinping - A Reminder of Who the Real Culprit Is 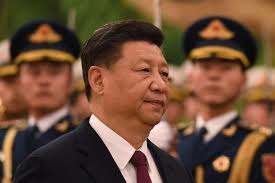 Following the media narrative in both Great Britain and the USA, one is led to believe that Prime Minister Boris Johnson and President Trump are guilty of mass murder, if not premeditated then by their supposedly incompetent handling of the COVID-19 global pandemic.

The mass hysteria manufactured by the mainstream media, including the taxpayer funded BBC, has dominated the 24-hour news cycle since the Wuhan virus first hit the headlines back in January. To say that the coverage has been hostile to both Johnson and Trump would be an understatement of epic proportions.

Whatever course of action Johnson or Trump take, they will be blamed for any negative consequences and denied credit for anything positive.

Any deaths after lockdown is lifted will be blamed on them because they lifted it too soon while all the bankruptcies and job losses will be because they did not lift it soon enough.

President Trump was excoriated by the shameless media and accused of racism and xenophobia when he correctly banned travel from China in the early days of the crisis.

While these two democratically elected leaders are being attacked by the lynch mob, and their administrations undermined and destabilized, the real culprit has been given a free pass. He has been exonerated of guilt by the enemies of the free world and their wholly owned government-media complex.

It was President Xi Jinping, the unelected, brutal dictator of China who gave the world the Wuhan virus in the first place. To compound this crime against humanity he lied about it while his own doctors who tried to warn the world were ‘disappeared’.

The fact that he isolated Wuhan, the home of the virus, from the rest of China but allowed international travel to continue indicates that Xi Jinping deliberately allowed the virus to infect the rest of the world.

While the enemies of freedom and democracy are undermining the administrations of Johnson and Trump, their hero President Xi Jinping, the butcher of Tiananmen Square, is stamping out democracy in Hong Kong and brutally oppressing its residents.

In addition to this outrage:

He is threatening to invade democratic Taiwan,

He is starting a border conflict with India,

He is imposing hegemony in the South China Sea,

He is looting Africa of its minerals and destroying the environment with his mining operations for rare earth elements.

He is continuing to ethnically cleanse the peace-loving Buddhists in Tibet.

In what we have come to expect, the United Nations has got nothing to say and its utterly useless agency, the World Health Organization (WHO), has openly sided with the Chinese tyrant.

To conclude, it is common knowledge among the more enlightened citizens of the world that the undermining of the Johnson and Trump administrations is a last-ditch attempt to remove them from office before:
Brexit becomes unstoppable after the transition extension deadline on June 30th, 2020.
The Presidential election due in November 2020 after which it is predicted that President Trump will be returned to office for another four-year term.

The freedom loving people of the world, and all the useful idiots joining in the Johnson/Trump witch hunt, will rue the day should the China supporting globalist cartel succeed in their malignant campaign to remove either of these two democratically elected leaders from office.

Posted by Daniel Thomas at 1:33 PM