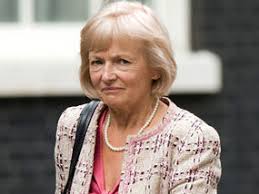 Whenever the term socialist hypocrisy is mentioned the first people that spring to mind are the Kinnock family. Its no secret that Neil and Glenys Kinnock have shamelessly made themselves very wealthy by helping themselves to millions of pounds of taxpayers money while at the same time falsely championing equality, fairness and compassion for the poor.

The intention of this post was to examine the first family of troughing as a whole but research revealed that Neil and Glenys Kinnock, together with their spawn, are wealthy ultra hypocrites each in their own right.

Just a rudimentary research lifted the lid on the culture of nepotism and patronage which is the hallmark of the Labour Party and socialist hypocrisy.

I have to give credit to the image makers of the Labour Party, they have the ability to change the public persona of anyone, no matter how awful, into an electable commodity. (see previous postings on Hain, Bryant and co.) Glenys Kinnock is a classic example.

The people were conned into believing that she was the dutiful, fragrant wife of a Labour MP who, as the representative a constituency mired in poverty, had pulled himself up by his own bootstraps to reach the dizzy heights of Leader of the Labour Party.

Glenys Kinnock, we were led to believe, was a noble school teacher dedicated to the education of our children who also empathised with the plight of the poor and downtrodden. The image makers spun that she was a devoted mother who was being touted as a suitable consort for the next Prime Minister of Great Britain.

Absolute nonsense, just scratching the surface of this manufactured image revealed a dedicated, ruthless, hard left extremist with an agenda all of her own.

Her biographies reveal that Glenys Kinnock is a member of the GMB union which is a financial supporter of the Labour Party and famous for its typically socialist habit of ballot rigging.

Glenys is also a member of the NUT (National Union of Teachers). This is now a militant outfit dedicated to the interests of teachers and not to the education of the country's children.

The NUT is led by fellow hard left extremist Christine Blower. In keeping with socialist hypocrisy Blower had an elite education in the Grammar stream of a bilateral school, something which she fights to deny other children.

Her first act as General Secretary of the NUT was to lead the first national teachers strike for decades.

This is the fanatic that leads Glenys's union and influences the education of our children.

Glenys joined the mega gravy train when somehow she gets elected as Member of the European Parliament  for South East Wales, which by coincidence, covers her husband former constituency.

Of all the school teacher mothers in South East Wales, what was it that singled out Glenys Kinnock for this ultra safe seat? There's a bad smell about this appointment and this bad smell turns into a veritable stench when the Kinnock children appear on the Labour Party scene.

Anyway, with a husband and wife team in place surely the people of Blaenau Gwent and South East Wales are in for a new Golden Age of prosperity.

As we've noted previously in the cases of Peter Hain, Chris Bryant et al. when these people get elected they know its a job for life, therefore they take advantage of their new position by putting their constituents needs to one side in order to pursue their personal agenda.

Under the banner of concern for the worlds poor and disadvantaged, Glenys Kinnock set about with gusto her ambition to further the cause of global socialism and the redistribution of other peoples wealth.

Glenys Kinnock's personal agenda kicked off when she joined the Pan European Socialist (PES) group immediately upon her arrival in Brussels.

This insidious group of totalitarians all share a common contempt for democracy.  All members are individual members of the Socialist International which was formed by an alliance of socialist, communist, anarchist and unionist groups from across Europe. This Socialist International split due to the usual hard left habit of bickering over method and is now known as the Progressive Alliance of Socialists.

The current loser in charge of this outfit is the spectacularly incompetent Georges Papandreou, the former Greek socialist Prime Minister who spent his country into bankruptcy and ruin.

Glenys Kinnock who is supposedly committed to spreading democracy elsewhere in the world supported the removal of the democratically elected Papandreou and the imposition of unelected EU bureaucrats to take over the Greek government.

Glenys Kinnock continued to ignore the needs of her constituents and began to redistribute their wealth when she joined the Committee on Development.

This committee was responsible for handing out aid money to developing countries together with the promotion of democratic values and the promotion of good governance and human rights. Glenys also got herself onto the Committee on Citizens' Freedoms, Rights and Justice.

Bearing in mind the actions of the European Union with regard to referendum results and the overthrow of the governments of Greece, Ireland and Italy, its difficult to take Glenys Kinnock's democratic credentials seriously.

In an act of stupefying irony Glenys Kinnock was anointed the Co-President of the African, Caribbean and Pacific-EU Joint Parliamentary Assembly which was supposed to promote Human Rights, Democracy and Common Values between these countries.

The truth is that Glenys Kinnock has been given a taxpayer funded platform which she uses to spread her own and her PES colleagues' failed socialist philosophy around the world.

Interestingly, Glenys Kinnock and her colleagues work within the Contou Agreement which promotes this hug- touchy-feely left wing  nonsense around the developing world. This agreement was signed in Contou, the capital of the West African hell hole of Benin.

After independence Benin became a Marxist country, the type of country preferred by Glenys Kinnock and economic collapse soon followed. In the 1979 elections President Kekokou was duly elected and just like the EU leaders Herman von Rumpuy, Jose Manuel Barrosso and Baroness Ashdown, he was the only candidate allowed.

Kekokou promptly put into practice the same policies preached by Glenys Kinnock, the Labour Party and her fellow EU socialists. He put the petrol industry, the banks, all other businesses and economic activity under government control with predictable results. The professional class left the country, the economy collapsed even further and the country has never recovered.

Be advised that Glenys Kinnock and her Labour Party comrades are busy applying the same failed logic to Wales and history will confirm that the results will be the same. Wales is already more than halfway there.

Glenys Kinnock likes a junket and one famous anecdote had her on a taxpayer funded jolly to Barbados where the banana market was the main issue on the agenda.  If this is how she spends her time it is abundantly clear that poverty and despair in South East Wales is way down the list of her priorities.

More evidence of Glenys Kinnock's hypocrisy is her membership of the British Humanist Association which is dedicated to secularism, human rights, democracy and egalitarianism (the removal of inequalities among people). She has failed on all fronts.

There's precious little human rights in the African countries, who's leaders she rubbed shoulders with as Co-President of the EU-JPA.

Glenys Kinnock could have demonstrated her commitment to egalitarianism by redistributing her own vast wealth among the poor people she represented, but in line with all the other Labour Party hypocrites it is unlikely she will practice what she preaches with her own ill gotten gains.

On the subject of equality, as was the case with socialist governments the world over, Glenys Kinnock has demonstrated that equality is only for the little people it does not apply to the elites of our modern day political class.

The peasants of South East Wales should know their place and give the Labour Party thanks for their generous welfare cheques. In exchange for that thanks your votes will do.

If the choice of Glenys Kinnock as MEP for South East Wales had a bad smell about it then the questionable appointment of her daughter Rachel leaves a real bad odour in the air.

Rachel Kinnock gave up her job in the taxpayer funded British film industry and surfaced in her mothers taxpayer funded EU office on a taxpayer funded salary. The hard pressed taxpayers of Blaenau Gwent are now paying for not one, not two but three members of the Kinnock family.

Glenys never misses an opportunity to pick the taxpayers pocket for that extra few pennies.  She was caught red handed signing in at dawn on Friday in order to claim the MEP,s daily two hundred and sixty pounds attendance allowance, before heading to the airport for a weekend at home.

There was a fiddle at the airport too. Glenys Kinnock would buy Economy Class tickets then claim Business Class fares from the taxpayer, pocketing the difference. At the airport she would then hassle the check in staff for an upgrade to Business Class, using the "don't you know who I am" ruse no doubt.

It boggles the mind that the hard pressed taxpayers of South East Wales are giving this trougher two hundred and sixty pounds per day on top of her salary and expenses, just for turning up for work.

After fifteen years of selfless devotion to the worlds poor outside of South East Wales and with a taxpayer funded fortune in the bank, that bad odour turns into a outright stench when Glenys Kinnock is offered the job of Minister for Europe in Gordon Browns government.

This position is in the House of Lords, an institution which is supposedly hated by the Kinnocks, who want it abolished. The very same Kinnocks who swore by all that is holy that they would never sit on those red benches until hereditary peers were abolished.

It appears that their long held principles are not worth as much as a taxpayer funded package of allowances and expenses, therefore Baroness Kinnock of Holyhead's backside is firmly planted onto the same red benches as her husband Lord Kinnock of Bedwellty, and their bank accounts are once again being stuffed with taxpayers money.

One drawback of Glenys Kinnock moving seamlessly from the EU gravy train to the House of Lords was that Rachel Kinnock was now out of a job...........but only for a little while.  The stench of nepotism and patronage that accompanies this family returns once more as Rachel surfaces in Gordon Brown's office as a member of his political staff.

Its unclear whether her salary was taxpayer funded or paid out of Labour Party coffers but if past form is anything to go by we can take an educated guess.

It doesn't end there for poor Rachel - when Gordon Brown got kicked out of office she lost her job yet again...........not for long...that old familiar whiff of nepotism comes to her rescue once more. She has now miraculously appeared in Red Ed Miliband's office as an Events Organiser or some other such non job.

Its unlikely that these jobs were advertised to the world outside of the incestuous political class but they are more likely the result of Labour party string pulling, patronage and downright nepotism.

We the people are being used, abused, ripped off and taken for fools.

The Kinnock family are so far removed from the people of South East Wales, and Blaenau Gwent in particular, that they might as well be on another planet.

While she has grown rich out of representing them, the people of South East Wales continue to suffer the indignity and hopelessness of high unemployment, welfare dependency, poor health, substandard educational achievement, drink and drug fuelled crime.

While Glenys Kinnock enjoys the lifestyle of the class she claims to despise, there is no evidence that conditions will ever improve for the people she represented for all those years.