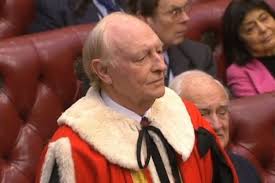 I'll start with an anecdote. I was sent to Kenya for a couple of months to cover for a colleague back in 1993. The corruptocrat in charge at the time was an odious creep named Daniel arap Moi.

Hailing from a minority tribe, Moi started life as a school teacher, he then became an MP for a Rift Valley constituency who worked his way up to be party leader and eventually becoming President of Kenya.

I returned to Kenya in 2000 to replace my colleague by which time Daniel arap Moi was worth $1.5 billion, his daughter June was employed in his office with a non job and with daddy's help his son Gideon became a businessman who was worth a reputed $550 million in 2011.

In the meantime his constituents in the Rift Valley remained dirt poor.

There were plenty of parallels between Moi and Neil Kinnock but unlike Moi, the latter didn't make it to the top job.

A look at Neil Kinnock's biographies reveal, as is usual with Labour Party hypocrites, he benefited from a grammar school education. This was the vehicle that provided social mobility for working class children which was subsequently denied to future generations by his Labour Party.

The replacement Comprehensive system locked children into a dumbed down shambles which still masquerades as schooling today.

Neil Kinnock went on to become "the first person in his family for a thousand generations to go to University" where he graduated in Industrial Relations and History, a qualification which is of little use for a career in the wealth and job creating sector.

Neil Kinnock is also the first person in his family in a thousand generations to accumulate a fortune without ever having done a proper job in the real world outside of the incestuous world of politics.

Neil Kinnock spent 4 years as a tutor for the Workers Education Association, a taxpayer supported charity which laughably includes equality and opportunity as one of its values. (Comrade Neil must have turned a blind eye to that one).

After an exhaustive investigation, that would appear to be it, the sum total of Neil Kinnock's experience outside of party politics comprises of being a student and a tutor in a taxpayer funded charity.

There is no record of any business or wealth creating experience prior to his entering Parliament as the MP for Bedwellty.  This was, and still is, a typical poor tribal voting South Wales coal mining community which would return a donkey to Parliament if it sported a red Labour Party rosette.

Neil Kinnock worked his up to the giddy heights of Labour Party leader, a tenure which was characterised in the early days with a sham fight with hard left.

Although he was a member of the hard left himself he realised that their loony policies and poor public image was hurting their chances of electoral success.

The battles with Militant Tendency made great headlines which the Labour Party image makers of the day, led by that calculating manipulator and ex communist Peter Mandelson, milked for all it was worth.

With the expulsion of Militant Tendency and a change of logo to a pink rose, the Party was apparently re-branded and now electable.

In reality nothing had changed. The loony left went underground, they put on suits and ties then carried on as usual. They are still in the Labour Party to this day in the shape of Jeremy Corbyn, Dennis Skinner, Diane Abbot, Michael Meacher, Ken Livingstone, 'Grunwick' Jack Dromey (of all women shortlist fame) etc.

Despite Mandelson's efforts at re-branding, Neil Kinnock's Labour Party went on to lose the 1987 general election taking only 31% of the vote.

Surprisingly Neil Kinnock stayed on as leader seeing off a challenge by that other left wing loon Anthony Wedgwood Benn. This is the wealthy hypocrite who tried to hide his background by proletarianising his name to Tony Benn. Nice try Anthony!

This consisted of dropping unpopular policies such as Unilateral Nuclear Disarmament, Clause IV, the Closed Shop etc. but no amount of image making could stop Neil Kinnock from being himself.

By using ten words where one would suffice he got himself a reputation for  bloviating windbaggery which is still his defining feature to this day.

Long winded speeches and inane statements against a formidable opponent like Mrs. Thatcher proved to be disastrous. I am not a Tory supporter but I have to give the Iron Lady credit, she was impressive, she exposed Neil Kinnock for the intellectual lightweight that he is and wiped the floor with him at every exchange.

It must have come as a relief when Mrs Thatcher was deposed in a coup by her treacherous colleagues and replaced by the grey man of politics, John Major. Sensing victory, Neil Kinnock unsuccessfully pushed for an early general election but when it finally came he lost that one too.

His embarrassing appearance at a victory rally in Sheffield the night before the election was blamed for his loss, together with the infamous Sun newspaper headline " If Kinnock wins today, will the last person to leave Britain turn out the lights". I remember it well, it was devastating but effective.

The headline seemed a tad unfair but the truth is that the majority of the British people didn't want a socialist Labour government with a Welsh Windbag as their Prime Minister.

He resigned the Labour leadership 1992 and instead devoting his spare time working to alleviate poverty in his constituency, he abandoned them in order to line his pockets.

Media appearances and the Labour Party/BBC revolving door were not filling his coffers fast enough so he followed his wife Glenys Kinnock and climbed aboard the European Union gravy train in 1995. As with all these riders, taxpayers money started to roll in relentlessly thereafter.

With no qualifications for the job, no experience of life outside politics and not a single vote cast, Neil Kinnock was appointed as Transport Commissioner over more qualified and experienced people. It's that familiar Kinnock stench and it seems to follow this particular family around.

Modelled on the failed Soviet Union, the European Union is a cesspit of financial and political corruption, conceived by politicians and run purely in the interests of politicians.

In 1999, after 5 years in office as Transport Commissioner, Neil Kinnock was forced to resign with the rest of the Jaques Santer corruptocrats after widespread fraud, obstruction and cover ups were discovered in the Commission budget by a whistle blower.

Naturally everybody in the Commission denied all knowledge, so a scapegoat had to be found to fall on their sword and accept punishment. ( This punishment was not so severe as to cost the volunteer her pension). With this dubious action the issue was whitewashed over and the gravy train was back on the rails.

Against all common sense and reason, Neil Kinnock was promoted to Vice President of the European Commission and charged with instituting reform. His reforms included staff salary and pension cuts but, surprise surprise, only for those joining after 2004.

It must have been difficult for a Labour Party socialist like Kinnock to implement budget cuts considering deficit spending is standard operating procedure for any member of the loony left.

By coincidence I'm sure, son Stephen Kinnock rejoins his father when he surfaces in Brussels as a British Council lobbyist in 1997 and gets promoted to Brussels Director in 2002.

In 2004, with his bank account awash with taxpayers money and with his second term as Commissioner drawing to a close, Neil Kinnock is mysteriously appointed head of the British Council. This is a Foreign Office funded front organisation set up to spread cultural propaganda, the arts and other left wing nonsense such as intercultural dialogue.

Wherever there are socialists, money grabbing is not far behind. Members of Parliament, including Labour's former Speaker of the House 'Gorbals' Mick Martin, were involved in a taxpayer funded scandal involving undisclosed expenses charged to the British Council.

Nothing came of it and nobody was punished, it would appear that politicians use a lot of whitewash so that too is obviously claimable on expenses.

That familiar Kinnock family stench, which was evident  from Glenys and Rachel Kinnocks' shenanigans, reared its ugly head again with Neil and his son Stephen.

Scandal wasn't far behind Stephen Kinnock either as the Russians accused the British Council of tax evasion and then Stephen was accused of drunk driving.

Claiming Diplomatic Immunity, he refused a breath test even though British Council staff do not have Diplomatic status. Rumours at the time claim someone behind the scenes pulled some strings but this is not confirmed.

For Neil Kinnock the British Council position was unpaid so in theory at the end of 2004 he was off the taxpayer funded gravy train..........but not for long... only about two months in fact, politicians look after their own.

After vowing never to sit in the House of Lords while hereditary peers remained in place, he accepted a baronetcy, accompanied by the usual taxpayer funded expenses, while 90 Hereditary Peers were still in place.

Neil Kinnock's principles are not worth a taxpayer funded sinecure, which also included access to money wielding lobbyists as a bonus.

What became of Stephen Kinnock when his father left the European Commission?

He was hurried out of Russia and kept his head down in Sierra Leone until the heat had died down from the St, Petersburg scandal, then in 2009 he became a Director of the World Economic Forum.

This is an organisation designed to bring about a new social order by stealth, which was set up under the patronage of the European Commission of which his father was a member. There is a familiar smell about this appointment also but accusations of Kinnock string pulling are unconfirmed.

For the record, scandal prone Stephen Kinnock is married to Danish socialist Prime Minister Helle Thorning-Schmidt and he is currently under investigation for tax evasion in Denmark.

So there they sit to this day in perfect harmony, Lord Neil and Baroness Glenys, the socialist hypocrites in the very House of Lords they both claim to despise, trousering taxpayers hard earned money to add to the millions they have already milked.

The Kinnock's are an established part of the elite one percent that they hypocritically claim to oppose. They now live in London to be closer to the gravy train and their grandchildren.

Like Daniel arap Moi's constituents in the Rift Valley, the long suffering people of Bedwellty, Islwyn, Blaenau Gwent or whatever they are called now, have served their purpose, they are no longer required and are cast aside.

For their contribution to the estimated Kinnock ten million pound family fortune, the people of Blaenau Gwent got the following in return:

Students leaving school with no recognised qualifications  3.1%, for Wales 1.5%

The Welsh Index of Multiple Deprivation shows 21% of areas in Blaenau Gwent are in the 10% of the most deprived areas in Wales, a staggering 83% of areas are in the top 50%.

Neil and Glenys Kinnock this is part of your legacy and you should be ashamed of yourselves. If your conscience keeps you awake at night try counting tenners instead of sheep.

*Update: Right on cue Guido Fawkes over on order-order.com has released the House of Lords expenses for last year. It turns out that our shameless, troughing first family claimed sixty six thousand pounds of taxpayers money.

Lord Kinnock regularly claims his three hundred pounds per day attendance allowance despite only speaking around once per month.

I live in hope that the people of Blaenau Gwent are paying attention and cease their terminally stupid habit of voting Labour come what may.

Update: Since this was written Stephen Kinnock was foisted on the tribal voters of Aberavon in South Wales and subsequently elected. He now sits in the British Parliament and is currently working tirelessly to overturn the Brexit referendum result and keep the British people locked inside the EU against their wishes.

Posted by Daniel Thomas at 1:25 PM