One of Great Britain's highest selling newspapers, along with its online version, published a gushing article recently titled "Portrait Of A Perfect Marriage", an intimate story detailing the courtship, loving marriage and idyllic family life of Sir Elton John and his partner/wife/husband David Furnish.

The article's over use of sugary language to describe their union makes one wonder if this isn't the most idyllic marriage ever in the history human relationships.

The Daily Mail article on May 19th informs the reader that it was eleven years ago this month that Sir Elton proposed to David, thus formalizing a relationship that - as the world knows - has blossomed into one of the most blissfully happy of show business marriages.

Apparently we know this because they have been generous enough to share almost every detail of their perfect family life with articles and interviews in celebrity magazines and high profile TV interviews.

Untainted by even a whiff of scandal or impropriety this truly wonderfully loving couple makes all other celebrity relationships appear insincere by comparison.

The article highlights their deep love for each other with David confirming that that he is committed to Sir Elton, the person he wants to spend the rest of his life with.

Surprisingly in the same 19th May edition the Daily Mail ran a second article on Sir Elton John and David Furnish who posed for the cameras after enjoying a meal together at a top London restaurant. 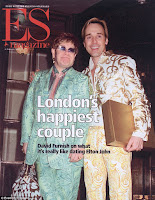 Along with the marriage of celebrity chef Jamie Oliver and Jools Norton, the marriage of David Beckham and Victoria 'Posh Spice' Adams are portrayed by the media as examples of successful scandal free celebrity marriages. They are of course heterosexual unions so in this age of overt political correctness there needs to be a counterbalance and the John/Furnish union not only fulfills that purpose but it gives succour to the ever more powerful gay lobby and their imposition of the LGBT agenda.

The sudden doubling down and fawning over the Elton John/David Furnish idyllic marriage and family life on May 19th is open to speculation but one can only come away the idea that this couple
and their families are as normal, natural and idyllic as as the Oliver and Beckham unions.

Other important news on May19th:

Despite being widely known everywhere else on the planet, including Scotland and Ireland, the Supreme Court judges have ruled to censor the press and deny the right of the people of England and Wales to know the true nature of a celebrity couple's marriage allowing instead for the media created image of  perfection to prevail.

According to reports, one half of the celebrity marriage took part in a depraved sexual encounter with another couple who were happy for the issue to be made public. Apparently, this exposure would have shattered the carefully nurtured public image of an idyllic marriage and happy family life.

'Think of the children' is another threadbare excuse for the judges to censor the truth. Exposing the truth would hurt the children who, apparently, believe the image makers as opposed to the truth about one of their parents.

In conclusion, equal justice under the law is a centuries old British tradition and requires consistency of those responsible for its application.

In the interests of British justice, lifting the injunction would be the right thing to do and if celebrities want to avoid negative publicity they should not cheat on their partners and more importantly their children by indulging in improper sexual relations.