Where are they? The silence is deafening. The great and the good, the wealthy celebrities who stood in solidarity with the poor and oppressed from behind their mansion walls and atop their multi-million dollar fortunes.

Where are the career politicians on both sides of the Atlantic who, bloated on taxpayer funded loot, paraded before the world's media proclaiming their support for the late Hugo Chavez and his socialist revolution. The revolution that was going to abolish inequality and empower the disenfranchised and downtrodden? 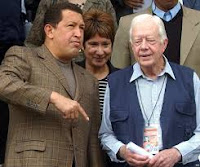 Where is the former President of the United States, Jimmy Carter, who gave his blessing to the the rigged election that saw the dictator Chavez returned to power?

Where is Jeremy Corbyn the far-left leader of the British Labour Party, a life long socialist and prospective British Prime Minister at the next general election? (Read about the hypocrites here)

It has come to pass that from behind his walled citadel the Pope never misses an opportunity to lecture the civilised, developed world about their obligations to economic migrants and their duty to share their non-existent wealth but he's swallowed his tongue on the consequences of wealth sharing in Venezuela.

Most disturbingly of all, where is the media? Where are the images of the food lines and empty supermarket shelves, of desperate people looting the scarce goods that are available in order to feed themselves and their families?

As resource rich Venezuela descends into chaos and the people resort to eating garbage as a side dish to feral cats and dogs the current socialist dictator, Nicolas Maduro, has built what socialist dictators throughout history have always built, i.e. a tyrannical totalitarian state.

With this disaster unfolding in Venezuela, along with similar disasters across the planet including Greece, North Korea, Zimbabwe, Argentina, Puerto Rico etc. etc., the noisiest proponents for socialism have gone eerily silent.

Other high profile cheerleaders for Venezuelan socialism are former Mayor of London Ken Livingstone and darling of left-wing journalism, Owen Jones, who are both conspicuous by their absence.

In the USA, when asked to comment on the socialist disaster unfolding in Venezuela, Democratic Party candidate for the presidential nomination, Bernie Sanders, refused to answer adding that he wants to concentrate on his campaign.

For the uninitiated, Sanders is campaigning for a socialist society in the USA. In other words he wants the same system that has wrecked Venezuela and reduced its citizens to abject poverty and starvation to be imposed on the American people.

His competitor for the nomination, former First Lady, Secretary of State and Alinskyite socialist, Hillary Clinton has also remained tight lipped about the disaster in Venezuela.

In conclusion, while it would appear that the cat has got the tongues of the aforementioned cheerleaders for socialism there is a reason for their silence. It's been bought with a promise that they will be immune from the consequences of a Venezuelan type catastrophe that will affect all the nations on earth if the UN/EU gets its way.

For those who follow global politics and world events it is plainly obvious that the UN/EU controlled global elite are engineering a one world, borderless planet based on the principles of total equality between nations, cultures and peoples. The whole world cannot be upgraded to western levels of prosperity, therefore in order to achieve global equality western nations must be downgraded accordingly and made less prosperous.

The continuous war on the middle class is proof positive of this.

That end result will be, as it always is in socialist societies, a governing elite immune from the consequences of their actions controlling the wealth of the planet and the rest of us plebs fighting for scraps.