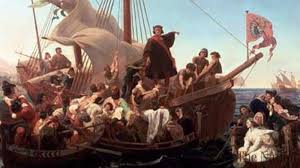 Being cast into the communications wilderness for a while I was unable to share my celebration of October 9th as planned. So better late than never here it is.

This day is a very special day in history that should rank alongside all other days of celebration with equal if not higher status.

The enemies of America, and consequently the enemies of liberty and civilization itself, are agitating to abolish the day that celebrates the discovery of the New World by Italian explorer, Christopher Columbus and replace it with something erroneously called ‘Indigenous Peoples Day’.

In their crude attempt to re-write history, these enemies of America and civilization claim that European settlers stole the land from peaceful Indian tribes who were living in harmony with each other and Mother Earth, harvesting from the land only what they needed to live.

Portraying life in pre-Columbus America as some kind of lovefest where tribal leaders spent their spare time smoking peace pipes and dancing around camp fires to the throbbing beat of Tom Toms could not be further from the truth.

In their project to construct this false image, they conveniently omit the sheer, unadulterated savagery of perpetual tribal warfare where ethnic cleansing, rape, pillage, mutilation and even cannibalism were the norm. They omit torture, slavery, misogyny, disease and a life expectancy below thirty years of age. (See here)

They also fail to mention that the people Columbus and the colonists encountered didn’t spring spontaneously from the ground but crossed a land bridge from Asia and colonized the land themselves displacing the indigenous people already there. One should study the discovery of Kennewick Man who pre-dated the current tribes by thousands of years and who's examination data and scientific conclusions was covered up by the Federal government for decades. Conclusions that are still disputed to this day.

The shape of the skull and other skeletal remains for instance  indicate that Kennewick Man is more akin to Polynesians and the ancient Ainu/Jomon people of Japan than modern Indian tribes.

So desperate was the Federal government and its establishment to protect the false narrative of the American continent being stolen from indigenous people by white Europeans they confiscated the remains of Kennewick Man and refused to release it for further study after the initial findings revealed that he pre-dated the current Indian tribes. (See here)

It is beyond disingenuous to claim that had Columbus not discovered the Americas these tribes would still be living in peaceful harmony Mother Earth and each other today.

Historical fact indicates that if the New World had not been settled by Europeans it would have been settled by a Chinese, Japanese or Russian diaspora who had already partially colonized Alaska. Had this been the case precedent indicates there would be no indigenous people left to honor with a special day.

The American people and the civilized world should celebrate Columbus Day with pride and joy because if history had taken a slightly different course, October 9th would be Mao, Yashimoto or Vladimir Illyich Day and western Judeo-Christian civilization as we know it today would not exist.

The second reason to celebrate October 9th is because it’s the glorious day in 1967 when the world was finally rid of the blood-soaked communist revolutionary, Ernesto ‘Che’ Guevara.

On this auspicious day the beloved icon of pimpled, pre-pubescent Toon Town revolutionaries whose photo-shopped face adorns T-shirts and bedroom walls the world over was put up against a wall and shot. 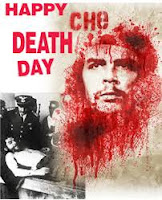 These juvenile revolutionaries along with millions of immature, post-pubescent adolescents are too emotionally retarded to understand that their communist hero was a psychopath who actually enjoyed killing his opponents personally and up close so that he could observe their terror and take sadistic pleasure watching their brains, blood and bone splatter asunder as he pulled the trigger.

Since having his mortal coil shuffled off by the executioner’s bullet, Che Guevara has been re-united down below with his fellow South American comrades, Fidel Castro and Hugo Chavez; hopefully it won’t be long before they are joined Raul Castro, Evo Morales of Bolivia and Nicholas Maduro Venezuela and the people of these blighted countries can finally inhale the fresh air of liberty and prosperity once again.

Since Columbus Day and Che Guevara Death Day fall on the same date I live in hope that the UN and the free peoples of the world declare October 9th Civilization and Liberty Day and ordain free beer for all in an act joy and celebration.

Posted by Daniel Thomas at 4:36 AM