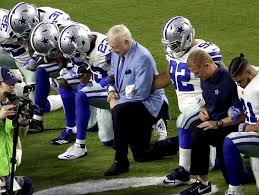 Watching multi-millionaire footballers disrespecting their country for a phony cause would be laughable if it wasn’t so sad. The issues they are protesting have not only been there for decades but got infinitely worse under the racially divisive regime of Barack Obama and his henchman Eric Holder.

The fact that these footballers didn’t make their pathetic protest during the Obama years when black people were being murdered in their thousands in places like Chicago, Baltimore, St. Louis and elsewhere proves beyond doubt it’s a political protest as opposed to solidarity with oppressed minorities.

Why weren’t they protesting when their compatriots were being murdered by illegal immigrants let loose into law abiding communities by treacherous politicians?

They didn’t ‘take a knee’ in solidarity with the family of Kate Steinle when she was mercilessly cut down in front of her father by a five-times deported illegal immigrant. 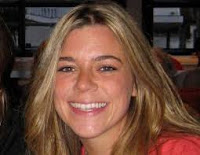 They didn’t ‘take a knee’ either when Muslim terrorists were murdering and maiming hundreds of innocent American citizens in Boston, Chattanooga, Orlando, San Bernardino and elsewhere. It’s no coincidence that this nonsense started after the election of Donald J. Trump to the Presidency of the United States.

These useful idiots are trying to convince their compatriots and the world that America was a wonderful place to live until January 2017 when President Trump took office and now after a mere ten months of his administration it’s descended into an unbearable, violence infested hell hole which they are going to put right by disrespecting the flag, the national anthem and insulting America’s brave military veterans.

Incidentally, the term ‘taking a knee’ is as phony as their protest. What they are actually doing in effect is pissing on the flag, the anthem, the military veterans and the country that gave them the opportunity to make tens of millions of dollars that football fans and the taxpayers that subsidize them can only dream about.

By allowing themselves to be used in a campaign by America-hating ‘progressives’ to undermine President Trump and destroy the traditional America he wants to make great again they are displaying not only weakness but a lack of intellectual acumen which prevents them realizing the fact that they are being used.


In conclusion, Great Britain is continually vilified as the most racist nation on the planet due to its imperialist and colonialist past. Only recently a report concluded that British institutions, including the police, are inherently racist.

If that’s the case then non-whites and minorities have cause to protest and they sometimes do. What they don’t do is disrespect the flag, the anthem or the military veterans at sporting events. In fact the opposite is true and the national anthem is sang with gusto and pride by players, coaches and fans alike regardless of skin color, ethnic origin or social status.

Shame on you NFL owners, coaches, fans and the gullible multi-millionaire players that insult America and its people with your phony protest.

Watch the English players, including non-white players, and fans proudly sing their anthem with the military in attendance here.

Even more blood stirring watch the Welsh players, coaches and fans black and white do the same here.

And finally, underneath all that body armor, helmets and face guards these ingrates are as weak as kittens compared to rugby players who take the big hits without dressing up like medieval knights. I’ll wager these pussies would wet their skin tight pantyhose with fright if they ever took the field in a game of rugby. They wouldn’t last five minutes.


Post Script - the United States has an international rugby known as the American Eagles, I would suggest that sports fans looking for an alternative to the treacherous NFL change their allegiance to rugby. Visit their website here

Posted by Daniel Thomas at 4:08 PM