Flags and Flagellation – The Killing of England And Its Culture 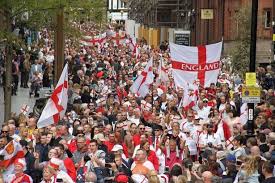 News that the authorities want to ban English soccer fans from flying the cross of St. George at the FIFA World Cup tournament that kicks off in Russia today (June 14th) should come as no surprise to anyone. The political elite in Great Britain have been waging a war on the English national flag for some time as part of their program to impose a so-called ‘multi-cultural society’ (See here)
According to the head of football policing, Mark Roberts, he’s the useful idiot who is pushing this policy that the English national flag will cause offence to foreigners because it could be seen as ‘imperialistic’ and could cause ‘antagonism’.
This statement raises two issues which would make the term ‘useless idiot’ more appropriate to describe the historically illiterate Mr. Roberts.
Firstly, it was the British Empire not the English Empire that dominated the world a couple of centuries ago therefore the flag that symbolized British imperialism was the Union Flag not the English Cross of St. George.

Secondly, Great Britain had no imperial designs on Russia so there is no reason for the locals to be antagonized as stated by Mr. Roberts. On the contrary, the two countries were allies during the second world war in the fight against Hitler and his National Socialists.

International sporting occasions like the FIFA World Cup are awash with national flags and patriotic fervor, but according to Mr. Roberts waving the English flag will be the only one that will remind the crowds of imperialism and cause antagonism.

As mentioned earlier the war on the English flag has been going on for some time as part of the cultural replacement agenda which seeks to destroy and replace the centuries old English culture and way of life with this so-called ‘multi-cultural society’.

This can be confirmed by the fact the English flag has been labelled as offensive to immigrants entering Great Britain and subsequently banned by many local authorities while flags of these new colonists are tolerated and actively encouraged. Even an offensive rag like the ISIS flag is not only tolerated but given police protection when aired in public despite being accompanied by threats of beheading, mutilation and slavery of their English hosts.

Obviously, parading the ISIS rag in public is considered by the politicized police ‘service’ to be cultural enrichment as opposed to ‘hate speech’ and anyone pointing out this ‘antagonistic’ flaunting of decency leaves them open to arrest and prosecution.

Only recently at an anti-Israel hate fest, the rag of the terrorist organization Hezbollah was openly paraded on the streets of London and given a police escort.

It’s well known that the life-long communist Jeremy Corbyn, the Leader of Her Majesty’s Opposition in Parliament and potential Prime Minister, is a supporter of Hezbollah as is the first Muslim Mayor of London, Sadiq Khan.

The flags of other nations including Jamaica, Pakistan and Palestine are flown over town halls up and down the country to celebrate their independence while with supreme irony the rag of the Palestinian terrorists is flown open at football matches without comment from Mark Roberts or his football policing unit. (See here and here)

In an act supreme insensitivity and antagonism, local politicians in Rochdale, England displayed the Pakistani flag at the town hall ignoring the fact that the town was home to a Pakistani grooming gang that gang raped and pimped out underage white girls. (See here and here)

One of the worst examples of offensive, antagonistic behavior that is tolerated and encouraged by the political elite and the police ‘service’ is the horrific spectacle of public flagellation on the streets of English cities by Muslims in celebration of some festival or other. (Watch the disgusting spectacle here and here)

This antagonistic, offensive and disgusting spectacle taking place on streets of Great Britain is spun by the political class and their bought-and-paid-for media as cultural enrichment while any negative comments are treated as ‘hate speech’ by the police ‘service’ leaving the commentator open to arrest and prosecution.

To conclude: The political class/ruling elite and their wholly owned mainstream media are spinning the narrative that a ‘cultural replacement’ agenda does not exist. They claim this is a term invented by the so-called ‘far-right’ to stir up racial animosity and hatred. Therefore I will end with a speech plagiarized from Wikipedia by Kate Osamor, the Member of Parliament for Edmonton, London in which she used in her maiden speech to the House of Commons. (See here) It not only confirms that the term exists but is successful and delivering the intended result.

“Since the 1960s Edmonton has been transformed from a predominantly white, working-class industrial suburb into a multicultural area through Commonwealth immigration, asylum seekers and the expansion of the European Union in May 2004. Edmonton Green ward has been identified as having one of the highest numbers of working-age adults living on state benefits in the UK…

Posted by Daniel Thomas at 6:30 AM