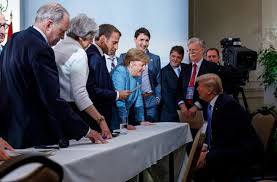 I must admit to getting sadistic pleasure watching the PR manufactured leaders of the world’s major economies get their collective arses kicked and their noses rubbed into a dose of reality by a businessman from the real world who speaks and acts on behalf of the people who elected him.

Their hysterical reaction to the measures taken by President Trump to redress the one-sided trade deals that have been screwing the American people for decades is illuminating. A straight talking, newly minted political leader fulfilling the promises he made during his election campaign is obviously an alien concept to these people.

Perhaps these world leaders expected President Trump to adopt their modus operandi and make different promises to different demographic, ethnic and religious groups to get elected then renege on every promise the day after the votes are counted.

Apart from building a big beautiful wall, candidate Trump reiterated at every rally, debate and press conference that he believes in free trade, but it must be fair trade. He followed this up by stating that he would pull out of the unfair Trans Pacific Partnership (TPP), renegotiate the unfair North American Free Trade Agreement (NAFTA) and pull out of the Paris Climate Accords which punished America but let countries like India, China and other third world polluters off the hook.

He also promised to use tariffs to immediately redress unfair trading practises and as leverage to encourage serious participation in trade deal renegotiation's.

Watching the previously invincible Angela Merkel meet her match and not get her own way was epic and a new experience for the mentally unstable German Chancellor who has caused murder and mayhem across the continent by bullying the European Union (EU) member states into adopting her disastrous economic and immigration policies.

The hopelessly inept anti-Trump Prime Minister Theresa May was brushed off like a piece of dandruff on Macrons collar and refused a one-on-one meeting with the President because he is tired of her school mistress-like, hectoring attitude.

The two Presidents of the EU, Donald Tusk and Jean-Claude Junker wisely kept their heads below parapet knowing that President Trump is a firm believer in nation state democracy and detests their corrupt and failing dictatorship with a passion.

At this point in his country’s history Prime Minister Conte of German governed and bankrupt Italy is a total irrelevance and his country will only return to relevancy in global affairs after they have thrown off the shackles of the EU that have turned it into a vassal state of Germany.

Hilariously, President Macron of France whose economy is seven times smaller than the USA threatened to ‘isolate America’ if President Trump persisted with his tariffs. I guess the President was left quaking in boots at the thought of a trade war with bankrupt France.

No circus would be complete without a clown and Canadian Prime Minister Justin Trudeau fitted the bill perfectly when he stepped into the ring to supply the entertainment.

Like the coward that he is the fawning pantywaist was meek and mild in the presence of the great man but immediately the President left on his peace mission to meet the North Korean dictator he stabbed him in the back with an eyebrow dropping performance of false bravado, threats, snide remarks and veiled insults.

This attack on the absent the President when he was unable to respond in person was an attempt by Trudeau to look tough to folks back home who are tired of his infantile behavior which they see as an embarrassment to their country on the international stage.

President Trump’s contempt for the entire G7 circus and their globalist ambitions was made plain when he left early, refused to be associated with the final communique and questioned the absence of Russia. The EU empire builders are targeting Russia because of their hatred of President Putin who opposes their continued eastward expansionist plans and his hold on Ukraine.

If this summit is anything to go by things can only get more entertaining in the future as the globalist leaders of the corrupt EU fret and watch as their beloved superstate project implodes due to Brexit and the rise of people power in the nation states with President Trump, and myself, enjoying the spectacle from the sidelines.

Posted by Daniel Thomas at 6:17 AM