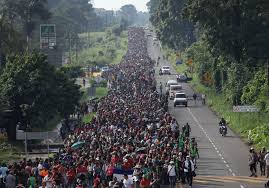 The idea that thousands of third world peasants from various Central American countries spontaneously decided to walk some 1,500 miles crossing the entire length of Mexico to enter the United States is beyond risible.

Enemies of the United States both foreign and domestic, have spent months organizing this sham and are busy micro-managing this assault on America’s borders as a continuation of the long planned fundamental transformation of America.

It doesn’t take a genius to work out that the stated aim of the ruling elite at home in America and abroad at the United Nations is to create a centrally controlled, borderless, egalitarian world which is an impossibility while the traditional United States exists in its present form.

The prosperity of the United States is due to its system of individual liberty inside a capitalist economic system underpinned by constitutionally limited government. This is in stark contrast to the poverty and misery of the surrounding nations and other nations around the world that suffer under socialist/communist systems of government.

A prosperous United States will always show up the failings of the world the global elite are trying to create and subsequently will always be a beacon of freedom to the poor and oppressed and the destination of choice for those trying to escape for a better life.

One does not see desperately poor people risking everything, including their lives, to leave the United States in search of prosperity in any of the surrounding socialist/communist countries or similarly governed countries around the world.

Also, one never sees those high-profile wealthy celebrities who threaten to leave the United States because they disapprove of its leadership cross the borders and actually leave despite being surrounded by countries with economic systems more to their liking and which they advocate.

Estimates vary that there are between ten and twenty million illegal aliens already in the United States so one would think that a few thousand third world peasants aren’t going to make a difference. Should they succeed and be allowed entry the repercussions will be far reaching and devastating.

Without immigration reform the precedent would make America’s borders redundant and therefore encourage further caravans, not only from neighboring countries, but from around the world. The trickle will become a deluge.

Once regularized with documentation, their path to citizenship would have to be extended to the millions of other illegal aliens already in residence altering the demographic balance and thereby guaranteeing power to the globalist elite in perpetuity.

The Constitution that has enshrined liberty and justice for all will be torn up and the citizens disarmed opening the door to a tyranny that cannot be peacefully removed.

In a paid private speech to multi-national bankers Hillary Clinton, then Secretary of State and renowned America hating globalist, declared that she wanted to see a ‘common market with open trade and open borders’ in the western hemisphere.

For a glimpse of this nightmare scenario one must only look at the utter destruction that open borders and migrant caravans have visited upon the nation states of Europe and the hell that their people are having to endure without end.

The ‘common market’ for the western hemisphere envisioned by Hillary Clinton with its open borders and free movement of people will trigger migration caravans on a biblical scale. This will result in the destruction of the United States of America and the torch of liberty, justice and prosperity, which is the inspiration for those fighting poverty and oppression around the world, will be extinguished and all hope lost.

Posted by Daniel Thomas at 6:21 AM