Trump v May – Honesty and Integrity v Betrayal and Treachery 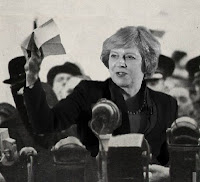 It should be obvious even to the most biased observer that President Trump is a patriot and a man of his word. Since he was sworn into office he is keeping the promises he made during his election campaign.

In contrast it should also be obvious to the same observers that British Prime Minister, Theresa May, is a treacherous lying rat who is working with other treacherous lying rats to overturn the result of the Brexit referendum and keep the British people locked inside the hopelessly corrupt and failing European Union (EU).

Candidate Trump made it abundantly clear during his election campaign that America’s trade deals around the world were poorly negotiated, grossly unfair and put America and the American worker at a disadvantage. Consequently, America suffered huge trade deficits with hundreds of thousands of jobs lost to overseas competitors.

In his campaign to put America first he promised to renegotiate these trade deals or pull out of them altogether and use tariffs to encourage recalcitrant nations to the negotiating table.

In less than twenty months in office President Trump has pulled out of the Trans Pacific Partnership (TPP) which disadvantaged America and American workers. He has renegotiated trade deals with Japan and Korea along with the disastrous North American Free Trade Agreement (NAFTA) with Mexico and Canada. He is currently renegotiating trade deals with China and the European Union (EU) and who would bet against him succeeding.

Contrast this with British Prime Minister Theresa May. She has been a politician for three decades, including Prime Minister for twenty-seven months, and six years as Home Secretary. Despite this she has failed to negotiate a trade deal with the European Union (EU) when Great Britain is scheduled leave its clutches on the 29th March 2019.

In a similar situation to the United States, Great Britain has a huge 60 billion trade deficit with the EU to which it pays 13.1 billion of taxpayers money per year in contributions for the dubious privilege.

European manufacturers, and millions of jobs, rely heavily on the British market to survive and some 3 million European citizens currently reside in Great Britain.

Along with the biggest mandate in British electoral history, this gives Mrs. May and her negotiating team enormous leverage to secure a trade deal which is advantageous to Great Britain and the British worker.

Despite this enormous leverage, over two years after the British people voted for Brexit there is no sign of a trade deal. To the frustration of everyone, including those who voted to remain, Prime Minister May has allowed the EU bureaucrats to dominate the leaving process to the point where there is no meaningful negotiation at all.

The entire circus is nothing more than a series of demands by the EU to which Mrs. May concedes including crossing the so-called ‘red lines’ which she swore by all that was holy were non-negotiable.

If the dominance of the EU and their total control of the leaving process was the result of Mrs. May’s incompetence her party would have removed her long ago and replaced her with someone better qualified to secure a deal, but it is not. Far from it.

Mrs. May is a life-long Europhile who is committed to the EU project of replacing the independent nation states of Europe with a single federal superstate. She campaigned for Great Britain to remain in the EU during the Brexit referendum campaign.

Since her installation as Prime Minister she has done everything in her power to frustrate the leaving process by using lies, duplicity and underhanded tactics including undermining her own Secretary of State for Exiting the EU, David Davies who promptly resigned when her duplicity became obvious.

Unlike President Trump, Prime Minister May repeatedly made promises she had no intention of keeping, including the supposedly non-negotiable ‘red lines’.

The enormity of her deception beggar’s belief. She has repeatedly promised that Great Britain will be leaving the EU after the two-year Article 50 period has expired on 29th March 2019.
Mrs. May has promised on a myriad of occasions that this means leaving the EU single market, leaving the customs union and leaving the jurisdiction of the European Court of Justice (ECJ). In turn this means taking back control of Great Britain’s borders, trade policy, money, fishing grounds and an end to the hated free movement of people. These make up the core of the non-negotiable red lines.

While Secretary of State Davies was negotiating in good faith, Mrs. May appointed her personal advisor and career bureaucrat Ollie Robbins along with a cabal of unelected civil servants to negotiate with the EU below the radar to come up with an agreement that keeps Great Britain attached to the EU institutions.

This agreement not only breaks the red lines but also her solemn promise to leave the EU and all its institutions. This  is the notorious and thoroughly discredited Chequers Plan which she is attempting to bounce the British people into accepting.

In this plan the single market continues as the ‘common rule book’ which also allows continued jurisdiction of the ECJ. The customs union becomes ‘the facilitated customs agreement’, free movement of people becomes ‘the mobility framework’. Taking back control of the fishing grounds is replaced by ‘a committee to explore common fishing opportunities.

Although Mrs. May claims Great Britain will leave the EU on March 29th 2019 she has agreed a flexible two-year implementation or ‘transition period’ whereby Great Britain will have left the EU but remain attached to the EU institutions and forced to follow its rules and regulations. These will continue to be in force and along with a 39 billion divorce settlement the British taxpayer will continue to handover billions more to the corrupt bureaucrats up until March 2021.

This is the "Brexit-in-name-only" that the British people were warned about the moment the Europhile Theresa May was appointed as Prime Minister.

As predicted at the time, Mrs. May would announce at some point that this so-called ‘transition period’ would need to be extended and sure enough this duplicitous lying reptile has agreed to an extension beyond 2021 which leaves more time for the democracy denying Europhiles to organize the overturn of the referendum result.

In conclusion, while it has taken President Trump less than two years to renegotiate trade deals with some of the largest economies on the planet, Prime Minister Theresa May’s treachery will have ensured the British people will effectively still be members of the European Union some six years after voting to leave.

Posted by Daniel Thomas at 7:40 AM