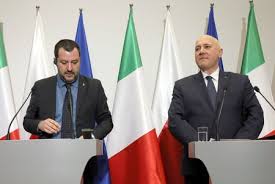 News that Italy and Poland are discussing plans to form a united front to overthrow the French-German axis that controls Europe is an indication of how their leaders are not only utterly deluded but also they haven’t been paying attention to recent history.

Italian Deputy Prime Minister Matteo Salvini met with Poland’s Prime Minister, Mateusz Morawieki, where they announced plans to give the European Union a new energy and new equilibrium to replace the dominant French-German axis and overhaul the Brussels institutions from within.

Either these politicians are extremely naïve, or they are completely ignorant of what the European Union is and how it works. The EU is a political project and the course is set for ‘ever closer union’ toward a single, centrally controlled sovereign state. It does not negotiate, and it does not tolerate dissent.

The Italians should know better than anyone since the unelected EU bureaucrats dismissed the democratically elected government of Silvio Berlusconi and replaced it with Brussels appointed technocrats because he suggested giving the Italian people a referendum.

Italy is treated as a second-class nation with an impotent government in what is supposed to be a Union of equals.

In neighboring Greece their impotent government is controlled by a troika of Brussels appointed technocrats who refuse to accept a budget that alleviates the suffering of the Greek people.

As is the case in Italy, attempts to pass a budget that doesn’t get the approval of German Chancellor, Angela Merkel, fail every time thus prolonging the poverty and misery of the Greek and Italian people for decades to come.

Margaret Thatcher did have a small success with her budget rebate which lasted until Prime Minister, Tony Blair, negotiated it away in exchange for institutional reforms on which the EU promptly reneged.

If that isn’t enough proof to convince the leaders of Italy and Poland to get real and stop deluding themselves, they should look at the current Brexit negotiations.

Despite having two of the biggest mandates in history to leave the EU the British people are still bound hand and foot to the supranational institution after two years of negotiations.

It must be admitted that incompetent leadership by a Europhile Prime Minister has given the EU bureaucrats the upper hand, but they have remained resolute that Brexit will not deflect the nation building project from its course.

To bring the leaders of Italy and Poland down from cloud cuckoo-land and back into the real world of EU power, Great Britain is the fifth largest economy on the planet, it is the third biggest contributor to the EU budget, it is a nuclear power with its own seat on the UN Security Council and yet it has failed time and again to reform the EU from within.

Italy and Poland are economic basket cases and two of the biggest recipients of EU funds, so they need to explain what leverage they have and how do they plan to succeed where Great Britain has failed?

In conclusion: The EU cannot be reformed, it does not negotiate with bankrupt nations with unstable governments and they will wipe the floor with any nations that try.

The only possible way for Italy, Poland, and any other nation that wants to free itself from French-German domination and take control of its own destiny, is to join the British people and leave the corrupt and increasingly authoritarian EU and join an alliance of independent sovereign nations.

Posted by Daniel Thomas at 9:28 AM