President Trump and Brexit Are Threatening the Axis of Evil 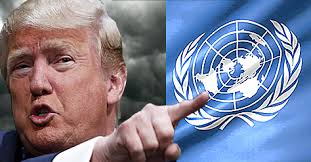 One of the notable consequences of the election of President Trump in the USA and the decision of the British people to leave the European Union is the emergence of the borderless one world globalists from the dark recesses of government from which they operate.

The epicenters of the organization who’s dedicated mission is to destroy the independent nation states of the world are the United Nations in New York and its bastard offspring in Brussels, the European Union.

Nationalism and sovereignty are two words that are striking fear into heart of every globalist who has spent their entire career eating away at the body politic and borders of independent nation states from their UN/EU headquarters.

These two words took on an added potency when they were uttered with absolute conviction by President Trump when he addressed the UN Assembly. As a staunch believer in nation state democracy he made it abundantly clear that he will put his country and his people first and maintain its status as an independent, sovereign nation in perpetuity.

His words were perfect and brought cheer to heart of every patriot and lover of liberty but must have struck like a stake through the heart of every globalist worldwide.

“Each of us here today is the emissary of a distinct culture, the rich history, and a people bound together by ties of memory, tradition, and the values that make our homelands like nowhere else on earth,” he said.
He continued: “That is why America will always choose independence and cooperation over global governments, control and domination. I honor the right of every nation in this room to pursue its own customs, beliefs, and traditions. The United States will not tell you how to live or work or worship. We only ask that you honor our sovereignty in return.”
Later, he added that "America is governed by Americans" and rejects "the ideology of globalism."

Ouch! This has got to hurt if you are a dedicated globalist who knows in their heart that their one world dream will not work if America remains independent, sovereign and prosperous.
(President Trump speaks at the UN here)
Since the globalist have spent five decades surreptitiously transferring sovereignty to their supranational organizations through Treaties, Compacts and Diktats, President Trump and Brexit have provoked a near hysterical reaction as their dream of a borderless, centrally controlled world hits the buffers.

Led by the fanatical globalist and mentally unstable German Chancellor, Angela Merkel, the calls for the transfer of sovereignty to be speeded up are deafening.

At the Konrad Adenauer Foundation in Berlin, Mad Merkel spoke loud and clear that nation states today must be prepared to give up their sovereignty. (See here)

At the same venue she elaborated on her statement by stating that nation states must give up sovereignty to the New World Order. (See here)

And to warm the cockles of every patriots’ heart Mad Merkel complained that Trump is destroying her beloved UN by cutting ties with some its more profligate and useless agencies. This commentator, and I’m sure many others, hope he is successful and this particular axis of evil is utterly destroyed.

In an outburst of globalist fervour Merkel attacks nationalism and claims that only UN values and cooperation pave a new future. (See here)

Mad Merkel's lapdog, Emmanuel Macron of France, backs up his master's lunacy by claiming that Nationalism is a betrayal of patriotism. (See here)

Another consequence of the Trump election and the Brexit vote is that the totalitarianism that lies at the heart of the globalists has been revealed. As the President's administration and Brexit continue apace, the attempts to overthrow both are gaining momentum.

The globalists involved in these attempts are powerful, well organised and well financed and they would rather see America and Great Britain fail and fall into destitution than Trump and Brexit succeed without them.

Whether they succeed or not remains to be seen but if they do the future for peace and democracy are very bleak indeed.

Posted by Daniel Thomas at 4:25 AM