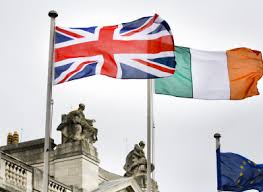 Apropos to my previous article ref, a Rogue Great Britain. (Link below)

Re-igniting the civil war in Ireland is a price the globalist elite will pay to protect their nation building project in Europe which has been put in serious jeopardy by the British people’s decision to leave the European Union (EU).

Speaker of the American House of Representatives, Nancy Pelosi, and Presidential candidate, Joe Biden, have been joined by former Prime Ministers John Major, Tony Blair, Gordon Brown and Theresa May condemning the actions the British government have taken to protect the integrity of a post-Brexit United Kingdom.

One of reasons they give for their intervention is that by protecting the integrity of the United Kingdom the British government is putting at risk the peace agreement, known as the Good Friday Agreement, that ended the civil war in Northern Ireland.

The truth is somewhat different, and it exposes these powerful globalists for the fanatics they are and the lengths they will go to protect their nation building project and their one-world government agenda.

The four former Prime Ministers are totally dedicated to the European Union (EU) to which they give their undying loyalty. Between them they surrendered so much sovereignty to the European Union, Great Britain ceased to be an independent country becoming instead a minor province of the United States of Europe. A star on someone else’s flag as someone so aptly put it.

The globalists, including those mentioned above, know that the European Union nation building project cannot survive with a prosperous Great Britain outside of its clutches. Therefore, it must remain under EU control with a Brexit in name only deal or be destroyed as a global economic force.

The Boris Johnson government has let it be known that the prevarication and deliberate delaying tactics are over; Great Britain will leave the EU and become an independent, sovereign nation free from all EU control with or without a trade deal at the end of the transition period on December 31st, 2020.

In desperation the EU negotiators attempted to blackmail Great Britain into accepting a Brexit in name only deal by indicating that they would inspect all goods entering Northern Ireland from the rest of the United Kingdom, including food, to protect their internal market.

This would leave Northern Ireland under EU control, splitting it off from their compatriots in a post Brexit Great Britain. It is this cynical brinkmanship that risks re-igniting the civil war on the island of Ireland.

The solution to this volatile situation is simple and uncomplicated. The European Union has been an unmitigated disaster for the Irish people both socially and economically. With the ending of British contributions to the EU budget and the loss of their biggest trading partner the situation will become infinitely worse for them.

The biggest disaster of all will be protracted civil unrest orchestrated by the EU fanatics to destroy Great Britain as a global economic force and save their failing nation building project.

To avoid this nightmare the Irish people should leave the EU (Irexit), take back control of their country and enter into a free trade agreement with Great Britain who are their biggest trading partner and economic saviors.

Irexit will mean that contentious borders between Northern Ireland and the Republic, and borders down the Irish Sea, will cease to be an issue or the catalyst for re-igniting the civil war.

Post Brexit, instead of being recipients of EU funds the Irish people will be poorer by becoming net contributors to the profligate and unaccountable EU bureaucrats. Taking back control of their money and taxes can only make the Irish people more prosperous.

Taking back control of their borders will put an end to the cultural and demographic disaster currently being endured by the Irish people and rob the Europhiles of an excuse for starting civil strife.

Ireland has some of the biggest and most fertile marine resources in the EU including the spawning grounds in the biologically sensitive and commercially important Irish Box. The Irish fisheries will boom and prosper once free of the environmentally disastrous Common Fisheries Policy.

To conclude, the Irish people should be under no illusions, the EU fanatics will throw them under the bus without a second thought to save their political project from the repercussions of Brexit.

Not only will Irexit make them more prosperous it will rob the EU fanatics of an opportunity to facilitate a civil war should Great Britain refuse to cave in to their blackmail.

Posted by Daniel Thomas at 9:25 AM