With the British general election campaign in full swing, the long suffering electorate are being subjected to the usual diet of false promises, tax bribes and lies along with bucket loads of bovine excrement expertly delivered by professional machine politicians who have been trained in the art of media manipulation and propaganda.

These career practitioners of spin and deceit who will be infesting television screens and the airwaves from now until the election are seen by the electorate as oleaginous, sleazy, self serving and thoroughly dishonest.

This reputation is rightly deserved and is causing consternation among the three legacy parties, together with their cronies in the establishment and the government-media axis, as they watch their century long grip on power rapidly ebbing away.

The contempt with which the political establishment holds for the British people is being returned in spades prompting one of the BBC's leading political correspondents, Nick Robinson, to state that he "is deeply alarmed at the voters' contempt for politicians".

The electorate are demanding spin free discourse and are no longer relying on the bought-and-paid-for MSM, led by the BBC, to frame the political debate. This manufactured debate has traditionally favoured the current political establishment and the legacy parties.

What has become blindingly obvious is that the these old parties, Conservative, Labour and the ludicrous Liberal Democrats, share a common agenda which is in direct conflict with that demanded by the people'. This has resulted in the rise of alternative parties led by the United Kingdom Independence Party (UKIP) and the Green Party.

The spectacular rise of the common sense, straight talking UKIP comes as no surprise but the Green Party, who already have a duly elected Member of Parliament in Caroline Lucas, is also gaining momentum to the point where their leader, Natalie Bennett is being invited to take part in the leaders debates. She was also invited to appear on the BBC's prime time Sunday Politics Show.

What is unnerving about the the Green Party gaining momentum and popular support is the fact that this lady can only be described as bat shit crazy and her parties' philosophy as totalitarian in the extreme.

If anyone was under the impression that the Greens are a party of benign environmentalists concerned with saving the planet then Ms Bennett laid that to rest with a candid explanation of her parties' philosophy and policies.

'Decriminalising' hard drugs and the sex industry along with abolishing prison except where there is a substantial risk of further grave crime is just a start, and if zero or negative economic growth to save the planet isn't mad enough then a 'free money' citizens income of $115 per week for everyone regardless of wealth or need is positively insane. 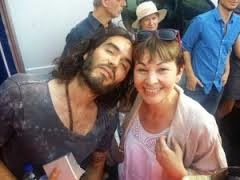 Caroline Lucas MP pictured with a drug addled supporter (above)

In addition to replacing the army with a home defence force, Ms Bennett and her party want to scrap border controls with more assistance to asylum seekers; she made no mention of vetting refugees for possible terrorists.

Idealists more suited to outer space like Ms Bennett and her Green cohorts have the capacity to ignore any inconvenient facts that may conflict with their world view. Despite daily occurrences of the most horrific brutality imaginable perpetrated by medieval savages belonging to Al Qaeda and ISIS it would not be a crime to belong to either organisation.

They have convinced themselves that hundreds, possibly thousands, of violent jihadis belonging to both these organisations, which exist only to wreak mayhem and bloodshed upon the British people, will be accepted as legal providing they don't carry out the actions they exist to perform.

As scary and dangerous as they may be, the Green Party's inclusion into the mainstream political debate is welcome because i) they have little chance of taking power and ii) they are an alternative to the old corrupt political order and hopefully they will play a part in its downfall and herald a return of sensible government of the people, by the people, for the people.

The Greens are Commies in disguise by The Conservative Woman

The Daily Telegraph here and the Daily Mail here

Posted by Daniel Thomas at 3:50 PM