Timing is everything for a musician playing complex music in a multi-person band and once that skill has been acquired it's never lost. It would appear that ex-Pink Floyd front man Roger Waters has carried over his abilities for perfect timing into the political arena.

At the same moment in history that rabid anti-semitism and Jew hatred makes a storming comeback in the western world, particularly in Europe and the USA, the loony left luvvie ramps up his anti-Jew campaign and calls on some six hundred or so other celebrities to join him and *BDS in a boycott of all things Israeli.

It's no secret that anti-semitism and support for the so called 'Palestinian cause' is a tenet of the 'progressive' loony left ideology which has been adopted by multi-millionaire celebrities like Waters. As is usual among this breed of celebrity they are most likely indulging in Radical Chic as part of their carefully manufactured public image.

Keeping their public image up-to-date and jumping on a popular bandwagon is essential for some superannuated celebrities because it gives them continued relevance which in turn keeps them in the public eye and the royalties rolling in.

In the event that Roger Waters is serious and actually believes the nonsense he is peddling it's worth looking at some indisputable facts for him to consider.

It must be noted however that the subject of Israel and the Jewish people is so charged with emotion it brings out the worst in people; it is almost impossible to discuss the subject rationally without the usual insults, threats and abuse pouring forth to distort the debate. Whether this is a tool deliberately employed by anti-semites to hide the truth and close down the debate is open to speculation.

Written evidence from multiple diverse sources confirm that the land of Israel has been the homeland of the Jewish people for some three millennia. This has been confirmed by archaeological evidence. Conversely there is no evidence whatsoever, written or otherwise, of a homogeneous, centrally governed nation called Palestine.

The Jewish people as a defined group go back further than the land of Israel but there is no defined historical Palestinian people. They are assumed to be the Philistines referred to in the Bible who's origin is variously described as Syrian or Jordanian and according to some modern archaeologists, they originated on the island of Crete.

The history of Israel is too complex for this essay but it goes without saying that despite the many expulsions of Jews from their homeland, there has been a Jewish presence in the land of Israel for thousands of years. (Please refer to a previous essay which goes into greater detail here)

In tandem with the rise of radical Islam, ISIS, and the sympathy of supposedly educated young people for the Palestinian cause, is the rise of anti-semitism and unadulterated Jew hatred in the Western world, particularly in Europe and the USA.

The justification for this hatred is variously claimed to be the theft of Palestinian land, the treatment of the Palestinian people, apartheid, the protective wall etc.etc. Being an intelligent, educated man, Roger Waters should know that this justification is spurious and increasingly used as cover for the anti-semitic sentiments they hold but are too embarrassed to admit.

Anti-semitism and Jew hatred pre-dates the UN mandated creation of the modern state of Israel in 1947, indeed it goes back to the original expulsion of the Jewish people from their homeland by the Romans.

Roger Waters may want to explain how the massacre of the entire Jewish population of York, England in 1190 AD, the Russian pogroms, the cleansing of Jews by the Baltic states and the Holocaust had anything to do with the treatment of Palestinians by the Israelis after 1947. 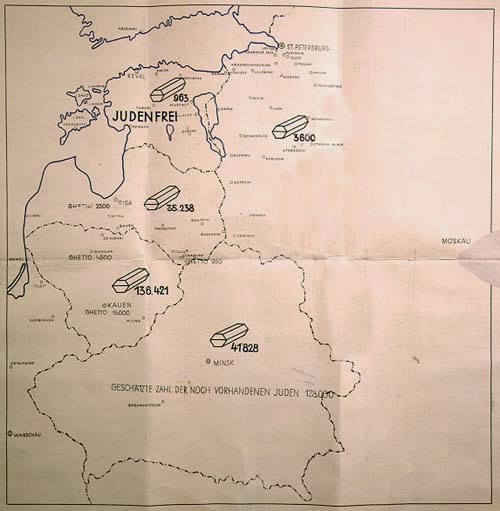 The infamous coffin map illustrating the numbers of Jews murdered in the Balkan states and also declaring Estonia "Judenfrei" (Jew free) is dated 1942, five years before the creation of Israel.

Anti-semitism is reappearing in the world. Apart from attacks in Denmark, France and elsewhere, just recently a pre-school in the Baltic state of Latvia declared itself "Judenfrei" which coincided with the visit of a European rabbi who was visiting Riga to commemorate the murder of seventy thousand Latvian Jews during WW II.

Water's comparison of the Jewish people to the Nazi's is not only appalling in its ignorance and grossly offensive, it is deliberately calculated to incite his more emotionally retarded followers to anger and further Jew hatred.

If this comparison is valid then Roger Waters is duty bound to let the world know the location of the cattle trucks, the rail heads, the death camps with their gas chambers and crematoria. Who is the Jewish equivalent of Adolf Eichman or Dr Mengele?

Rogers uses the security barrier as evidence of apartheid but fails to acknowledge that it was built in response to terrorists and suicide bombers continually murdering Israeli civilians. It's going to be interesting to hear what he has to say about the proposed six hundred mile wall the Saudi's plan to build in order to prevent similar terrorist attacks on their civilians.

He fails to acknowledge that the people of his beloved Gaza elected Hamas as their representatives. An organisation that is committed not only to erasing Israel off the face of the earth but to kill every Jew on the planet.

"Allah's Messenger (may peace be upon him) said: The last hour would not come unless the Muslims will fight against the Jews and the Muslims would kill them until the Jews would hide themselves behind a stone or a tree and a stone or a tree would say: Muslim, or the servant of Allah, there is a Jew behind me; come and kill him; butthe tree Gharqad would not say, for it is the tree of the Jews".

He fails to acknowledge that every peace offer, including land for peace and the two state solution, have been rejected by the Palestinians because they refuse to accept Israel's right to exist as pre-condition.

Most importantly he fails to acknowledge that Hamas and the Palestinian people are, by their own admission, part of the wider Ummah that includes, the PLO, Hezbollah, the Muslim Brotherhood, Al-Shabbah, Islamic Jihad, al Asqa Martyrs Brigade, the Taliban, al-Qaeda, ISIS etc.

Roger Waters and his his merry band of followers are either naive, stupid, cynical opportunists or all three if they believe that the Palestinians and the organisations mentioned above are going to stop their murderous rampage should they achieve their goal of erasing Israel and the Jewish people from the face of the earth.

They will not settle down in their much longed for part of the desert and live peacefully ever after in perfect harmony with the world.

From childhood they have been taught to hate Jews and infidels, they have been indoctrinated to worship death and martyrdom. Killing and mutilation is in their blood, they will be unable to stop even should they want to. They have no interest in peace and making a contribution to civilisation. As we can see with their comrades in ISIS, they will continue their jihad until they succeed or claim their virgins in paradise.

When Roger Waters and the rest of the entertainment community give a series of concerts in support of their anti-Israel campaign in Gaza, the West Bank, Iran, Saudi Arabia, Egypt, Libya, Iraq, Syria etc, I will make a point of not buying the CD.

* Boycott, Disinvestment and Sanctions. This applies to Israel and Jews only, not Zimbabwe, Somalia, Pakistan, etc. who qualify for international aid regardless of their appalling human rights records.

Get your filthy hands off my desert - Pink Floyd