Black Lives Matter Take Their Racism And Revolution To London 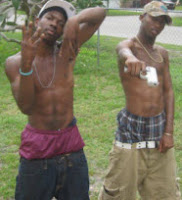 When shoppers and tourists enjoying London's iconic Oxford Street were prevented from going about their legitimate business by a troop of violent black racists using intimidation to advance their revolutionary agenda, it was most likely they had no idea what the orchestrated piece of political theatre was about. (See march story here)

"Hands up don't shoot" is a meaningless chant to the patrons of Oxford Street, while Trayvon Martin and Michael Brown are hardly household names outside the USA. As a consequence they would be unaware that the entire Black Lives Matter (BLM) charade is an anti-capitalist revolutionary movement which was manufactured using deliberate lies to create martyrs out of wannabe gangstas and common street thugs.

They would also be unaware that the President of the United States of America, Barack Obama, along with a host of other agenda driven political hacks from his administration, facilitated the creation of BLM as part of their fundamental transformation of America.

Another chant by the BLM street thugs was "F*ck Off Theresa May". What the presumptive Prime Minister had to do with shooting black people in America is not immediately apparent . The fact that May is a conservative highlights the anti-capitalist element of the BLM movement. (See the F*ck off video here)

In order that the British, and other readers outside the USA, be informed about BLM before they get taken in by the propaganda being disseminated by the bought-and-paid-for mainstream media (MSM), allow me to put the record straight with the truth.

BLM is another tool in the armoury of revolutionary former Nazi George Soros who has sworn to bring down western capitalism. Since the United States of America epitomizes the prosperity that capitalism brings to the masses, destroying it is essential to him achieving his goal.

Whether it is by accident or design, the Soros agenda and that of the Obama administration, along with the Hillary Clinton Democratic Party, are one and the same. They share an anti-capitalist, anti-American ideology and they will use any means at their disposal, including the murder of policemen, to bring about the downfall of both.

Such is the visceral hatred billionaire Soros has for the USA he has dedicated his life and fortune to bringing it down and to that end he finances a myriad of anti-capitalist, anti-American movements out of his multi-billion dollar fortune. (See here and here)

Unfortunately for decent law abiding citizens of all colors and ethnicity, Soros doesn't care how the downfall of America, and western capitalism, is achieved and that includes using propaganda to stir up division and hate between races resulting in violent civil strife and an inevitable race war.

The leaders of BLM and other black organizations such as the New Black Panthers and the Nation of Islam are openly calling for the deaths of white police officers and white people in general without fear of arrest or sanction. White people calling for similar action against blacks or Muslims would be spared no quarter and removed from circulation with all possible speed accompanied by a media frenzy of condemnation.

Blocking highways and preventing law abiding citizens going about their legitimate business, let alone murdering black policemen, would not be tolerated if perpetrated by non black people or advocated by non black organizations.

BLM was long planned and the complicity of the Obama administration was evident from its first faltering steps.

The administration spin machine and the MSM were primed ready to portray the next 'African-American' shot by a white man as proof of the indiscriminate killing of innocent black people by racist white people solely on the basis of their skin colour.

Trayvon Martin was the chosen martyr; he was endowed with divine status even before the facts were known. The orchestrated administration and media frenzy portrayed the incident as a needless slaying of an innocent black youth going about his business by a racist white thug who was out to kill a black kid.

As further evidence of the administration's complicity in the creation of the Trayvon Martin myth, and subsequently the BLM movement, the half white President of the United States, without waiting for the truth, made the outrageous comment that 'if he had a son he would look like Trayvon Martin'.

In addition to this, his racist Attorney General and black activist, Eric Holder, prejudged the issue as an indiscriminate racist slaying then misused the powers of his office to prove the official narrative in order to stir up racial hatred.

The truth when it finally emerged revealed that Trayvon Martin (pictured above left) was shot by a non white neighborhood watch captain who was attacked and viciously assaulted by the wannabe gangsta and feared for his life. Despite the fact that the registered Hispanic, George Zimmerman, was cleared of all charges, Martin remains a martyr to the BLM.

The 'hands up, don't shoot' chant has also been proved to have been created using a blatant lie. The false narrative is that another innocent black youth, Michael Brown, was needlessly gunned down by a racist white police officer while surrendering with his hands up. This incident resulted in days of rioting and looting by the black community of Ferguson, Missouri. Riots and disorder that was apparently financed by Soros. (See here)

The truth as revealed by the justice department was that Michael Brown was a common street thug who had just assaulted a store owner during the course of a robbery and far from surrendering with his hands up, charged at the officer and attempted to get hold of his gun.

Almost every other incident used by BLM to incite racial hatred and justify the killing of white policemen, and white people in general, are equally false. This makes it all the more important that the public outside of the USA should be made aware that this organization was created by malevolent anti-capitalist, anti American ideologues who are using black and white useful idiots to foment civil strife and revolution

As Greek dramatist, Aeschylus, is quoted as saying back in 500 BC "in war the truth is the first casualty" and so it is with the BLM  who use propaganda to create the myth that black people are being indiscriminately murdered by privileged whites for no other reason than their skin color.

If the truth is the first casualty in war then beware, if this revolution to bring down capitalism and America gains any more momentum the truth won't matter at all.

To learn more about the false narrative of BLM I recommend watching a short video from the superb site 90 Miles From Tyranny.

Posted by Daniel Thomas at 4:47 PM