Healthcare Scavengers Feed On The Corpse Of A Much Loved Friend 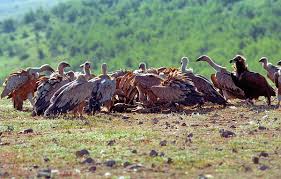 While the debate rages in the USA about replacing Obamacare, the American people should be made aware that like the socialized health care system in Great Britain Speaker Paul Ryan's plan will expand government dependency by creating more entitlements and bureaucrats will gorge themselves on the endless supply of taxpayers money.

It has become an eternal truth that wherever there is an unlimited supply of taxpayers money scavengers and parasites appear from nowhere to exploit the largess and stuff their pockets and their bank accounts with ill-gotten gains.

Like all organizations that are financed by the long suffering taxpayer these career bureaucrats give themselves fancy titles to deflect attention away from what they really are; namely parasites and scavengers that have made a career out of conning the public about their expertise then growing fat on looted money.

Hence in Great Britain’s National Health Service (NHS) there are hundreds of thousands of self-styled healthcare professionals, healthcare consultants, healthcare experts who’s only discernible skill is perpetuating themselves by creating ever more complex rules and regulations then expanding the existing bureaucracy to police them. (One horrendous fat cat looting scandal here)

Like an amoeba they have the ability to multiply themselves by dividing and sub-dividing without any apparent stimuli from outside.

Recent figures show that some five hundred and fifty-six thousand (556,000) non-clinical staff are currently employed by the NHS which does not include clinically trained staff who no longer serve on the front line having become full-time bureaucrats.

Also this figure does not include sub-contractors and agency staff that consume resources but don’t appear in the headcount numbers.

It is accepted that a certain amount of non-clinical, administrative staff are essential to the smooth running of any organization but the NHS has gone far beyond what is required and become a bureaucratic behemoth that devours taxpayers money in exchange for ever increasing amounts of rules and regulations.

Complexity is a black hole for money and the friend of the bureaucrat; the following is the labyrinth that’s stands between sick patients and the healthcare they pay for through their taxes. 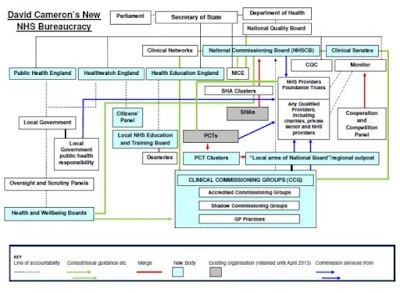 If that’s not complex enough inside each of the boxes above lurks another equally complex and expensive bureaucracy that puts further distance between the sick and the treatment they need . In the case of serious illness and diseases it stands between life and death.

A local NHS Trusts for example looks like this: 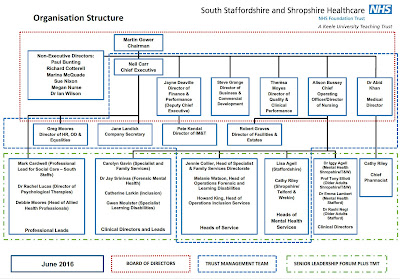 These self same healthcare professionals, consultants and experts speak their own alien language which is unintelligible to all but those initiated into the esoteric world of the bureaucrat. One has to wonder if this language hasn't been deliberately designed to confuse simple minded politicians into handing over evermore sums of taxpayer money without question.

Hence, in the language of the bureaucrat, funding the NHS has become:

"Mapping the Health & Social Care Procurement Landscape by Maturity, Impact and Operating Model" and it looks like this. 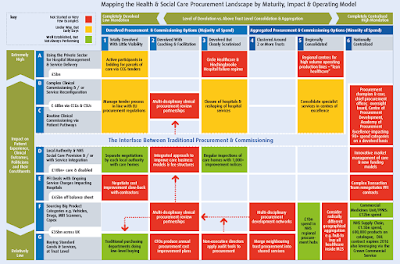 These self-styled professionals, consultants and experts don’t come cheap with six figure salaries, gold-plated pensions and generous expense accounts awarded without any apparent requirement to deliver results. Unlike private industry there are no sanctions in event of non-delivery or, in the case of the Mid-Staffordshire NHS Trust, mass deaths caused by poor healthcare delivery.

Anyone who has had the misfortune to work with a bloated out of control bureaucracy will know that they are not only expensive, hopelessly inefficient, time consuming and an obstacle to performance but unaccountable as well. Faceless bureaucrats notorious for their fancy job titles are in charge of everything but responsible for nothing when their inefficiency and incompetence is exposed by poor results and scandal.

Unscrupulous politicians never miss an opportunity to pursue their agenda hence the NHS has been politicized to the point where imposing political correctness has taken precedence over patient care.

While demand has increased due to a surge in population, numbers of frontline clinical staff has not kept pace exponentially. This has caused waiting lists to become even longer than they already are resulting in the deterioration of the patients condition.

This scandalous inefficiency has spawned a spin off industry which is nothing more than a scam which fleeces patients who are desperate for treatment. Faced with a delay of months or longer for treatment, the doctor or consultant concerned will offer to treat the patient privately without delay for a payment, often in cash in hand.

Frightened patients desperate for treatment have been known to sell the family silver or go into debt in order to get treatment they've already pay for. Doctors and consultants with waiting lists running into months can suddenly find time to treat patients privately for a wad of cash.

Known as 'going private' it makes the NHS  ethos of  healthcare free at the point of need regardless of ability to pay looking a bit sick and in need of attention itself.

This article is intended to highlight to the American people some of the pitfalls of nationalized healthcare provision and it could run into several volumes. I would urge them to read what is written so far and be absolutely sure that the replacement of Obamacare offered by Speaker Ryan is not the same inefficient, taxpayer funded gravy train that will benefit bureaucrats and agenda driven politicians at the expense of those in need of healthcare.

Revealed: 9000 deaths per year caused by politicians worshipping at the alter of the NHS here

Revolving door. One in 5 staff paid off by the NHS are re-hired here

Posted by Daniel Thomas at 9:10 AM