Theresa May Absolves Islam From The Death And Mayhem In London 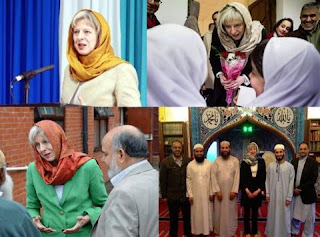 When it was announced that the Houses of Parliament would require 4 billion pounds worth of repairs because its structure was rotten and in danger of collapse I suspect that people who are tired of political spin and deceit toyed with the wish that it would collapse while the charlatans and blowhards who inhabit the place were in attendance.

The nest of vipers is not just rotten on the outside, unfortunately in this case there is no danger of a political collapse since the electorate fall for the spin and lies and keep electing them to office.

As sure as night follows day we all knew it would happen, the political elite and their apologists for Islam would crawl out of the rotten woodwork and insult the intelligence of the informed British people. Those who are immune to the spin and PR of government speech writers will be forgiven for being nauseated by the government machine in the aftermath of the latest Islamic atrocity.

Just as she did after the terrorist attacks in Paris and elsewhere British Prime Minister, Theresa May, was quickly out of the blocks to absolve Islam from blame for the carnage in Westminster, London.

In her rush to absolve her most favored community from blame, she is quoted as saying that it is wrong to describe this outrage as Islamic terrorism. She says it’s actually Islamist terrorism.

I’m sure the people of Great Britain and around the world will be reassured by the knowledge that death and mutilation in the name of Allah will be perpetrated by an Islamist terrorist as opposed to an Islamic terrorist.

The world owes her a debt of gratitude for imparting this knowledge but it is unlikely that Mrs. May’s theological clarification of what constitutes terrorism in the cause of Islamic jihad will bring comfort or relief to the injured and bereaved or lessen their pain.

Whatever spin Mrs. May uses to absolve Islam, the reality is that the victims were murdered in cold blood and horribly mutilated by a Muslim terrorist who did it in the name of Allah, as commanded by his prophet Mohammad and as written in the Koran.

With her newly revealed knowledge of Islamic theology, perhaps Mrs. May can explain the theological reasons why Muslims kill or subjugate people they refer to as non-believers, infidels and kuffurs; why they behead people or chop off their hands and feet or why they want to erase Israel and the Jewish people from the face of the earth? 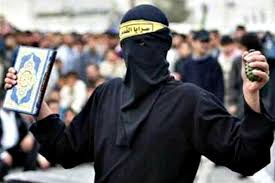 I’ll give her a clue - it’s written in the Koran, their holy book, which is taken literally by hundreds of millions of Muslims across the planet from the Philippines in the east to Senegal in the west; this includes millions of Muslims who have immigrated into western countries, including Great Britain, forming semi-autonomous, sharia controlled mini-caliphates loyal to the Ummah as opposed to the host country.(See here)

With her newly revealed knowledge of what is or is not Islamic perhaps Mrs. May would enlighten a cynical world as to whether the Wahhabi controlled Kingdom of Saudi Arabia is Islamic or the Ayatollah controlled Islamic Republic of Iran, who happen to be the biggest sponsor of Muslim terrorism on the planet. The clue is in the name but we bow to her greater knowledge.

While we are on the subject perhaps Mrs. May could also enlighten us as to whether Libya, Egypt, Iraq, Syria, Pakistan, Bangladesh, the Muslim Brotherhood, the Muslim Council of Great Britain, the Palestinian Authority, Hamas etc. are Islamic or Islamist because they all call for the eradication if Israel and the Jews from the planet and in one way or another they are all loyal to the Ummah and support sharia law.
The remarks made by Mrs. May both after the outrage and later in Parliament were nothing more than a load of meaningless drivel that were hollow and riddled with hyperbole and hypocrisy.

Doubling down on the ‘attack on democracy’ nonsense she spouted the previous day, Mrs. May began her statement to Parliament with the ridiculous assertion that this ‘act of terrorism was an attempt to silence our democracy’.

One man charging the Palace of Westminster armed only with a knife is hardly the storming of the Winter Palace or a Bastille type attack to overthrow the government. Unlike the defenseless members of the public on the streets outside, the Members and Lords inside were in lockdown surrounded by armed security and were never in any danger.

Listening to the ‘attack on democracy’ rhetoric emanating from the Palace of Westminster one gets the impression it was akin to the siege of Mafeking or the heroics of the Spartans at Thermopylae.

While the dead and dying were being tended to Mrs. May herself was spirited away to safety by helicopter and her senior Ministers were evacuated in their armored limousines escorted by armed guards.

The platitudes and faux sympathy mouthed by these self-serving charlatans was the same rehearsed, threadbare drivel they spouted after the last Islamic terrorist outrage and it will be used again after the next one and the one after that.

Mrs. May informed the House that hundreds of police worked through the night to investigate the incident – its preparation, motivation and whether he had associates.

Investigate the motivation? Seriously? She only had to listen to the hate preacher that she failed to deport during her six years as Home Secretary.  Abu ‘the Hook’ Hamza, made it plain on the streets of London that it is incumbent upon all Muslims to kill infidels and kuffurs to bring about their subjugation and sharia law to Great Britain.

In Mrs. May’s Great Britain, referring to the people as infidels and kuffurs and calling for their murder does not constitute a hate crime but quoting from Sir Winston Churchill’s The River War will land one in jail. (See here and here)

She is also on record as saying that medieval sharia law actually benefits some people in Great Britain; who and how she doesn’t specify. If sharia law in all its misogynistic glory is acceptable then surely female genital mutilation, child brides, incest and other such barbaric Islamic requirements must be acceptable also.

The sad fact is that Theresa May and the rest of the political elite have the power to act and lessen the chances of more death and destruction on the streets of Great Britain but they choose not to. They are totally committed to the UN/EU cultural replacement agenda and Islamification.

Mass immigration from Muslim war zones will continue, mosques and madrassas will remain open to preach hatred and jihad against the British people, mono-cultural ghettos will continue to serve as breeding grounds for future jihadi’s. At the same time those holding an opposing point of view will continue to be smeared, demonized and threatened by the law and innocent people will continue to be sacrificed on the altars of diversity and multi-culturalism.

Theresa May "It's nothing to do with Islam" here, here and here

Posted by Daniel Thomas at 7:52 AM