Brexit Betrayed Part II – The Communist Wolf at The Door 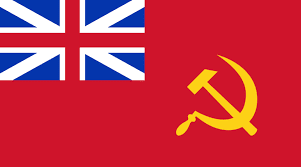 What the world doesn’t realize as it watches the British government descend into an absolute shambles is there is much more at stake than Great Britain’s continued membership of the corrupt and failing EU.

The two biggest consequences of Prime Minister Theresa May’s Brexit betrayal are the increased likelihood of a General Election and the fact that the communist controlled Labour Party has overtaken her Conservative Party in the polls.

Like Theresa May’s Conservative Party, the Labour Party are also committed to remaining inside the EU with the additional nightmare of a communist disaster should the polls be accurate and the Labour Party get their hands on the levers of power.

Many people believe the Labour Party leader Jeremy Corbyn and his Komrade No 1, John McDonnell, will mellow should they come to power, but these are serious communists who have spent their entire lives working to overthrow capitalism and bring down the British state they despise so much.

If Theresa May is banking on the fear of a communist led Labour government to win the next election she is making a big mistake. She is underestimating the disenchantment with her Brexit betrayal and the alienation of her core support by adopting globalist dictated ‘progressive’ policies.

These include the universally despised foreign aid budget, the obsession with sexuality and gender politics, imposed multi-culturalism, imposed Islamisation, imposed political correctness, destruction of the once respected police force and a selective criminal justice system which favours minorities, etc. etc.

Her Merkelesque crushing of free speech in order to stifle dissent would be welcome in the communist dictatorship she is gradually easing into power as is her refusal to listen to the people including her natural conservative supporters.

Whether Theresa May resigns, gets kicked out or clings onto power the British people can’t win without a drastic change in policy and judging by her initial response to the resignations in her Cabinet this won’t be forthcoming.

Please read a previous articles on the communist danger to the British people.