'Life Of Brian' Is Blasphemous And Offensive - Behead Monty Python 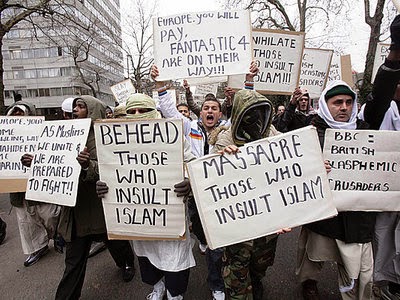 "The future must not belong to those that slander the prophet of Islam".

Brian Cohen:  Who cured you?

From The Life of Brian - The Monty Python Team

It shouldn't be asking too much for the so called leader of the free world, President Barack Obama, to show a consistent approach toward all religions of the world instead of showing deference to a single one. This is even more important in light of the fact that adherents to his preferred religion are responsible for mass murder on a horrific scale against other religions particularly the one he is supposed to espouse.

It would appear that only the agenda driven political class and those from the 'progressive', self- loathing community remain unaware that Islam seeks to dominate the world and that all other religions and people must be subservient to it.

Led by the leader of the free world, these Dhimmis have the ability to ignore the tens of thousands of cold blooded murders of Christians across the planet, carried out in the name of Allah the Merciful and his prophet Muhammad (Peace Be Upon Him?), and still proclaim that Islam is a "great global religion of peace".

Since the 1988 publication of Satanic Verses by Salman Rushdie and the fatwa issued by Muslims calling for his murder, the issue of freedom of expression has become one of life and death.

In 2004 Dutch film producer Theo van Gogh was brutally murdered while cycling to work in his native Amsterdam by a Muslim fanatic. His crime was collaborating with Somali born writer Ayaan Hirsi Ali on the short film called Submission, which criticised the role of women in Islam.

In 2005 riots, bloodshed and mayhem around the world followed the publication of cartoons of Mohammad in the Danish publication Jyllands- Posten.


The Last Temptation of Christ by Martin Scorsese was considered to be particularly offensive but the western leaders ignored the objections of the offended Christian community as they do to this day.


Not only are Christian objections ignored by the political class and its attendant army of sycophantic 'progressives' and self loathers, they are actively erasing Christian festivals and symbols from public life in favour of alien ones.

It is now accepted as inevitable that Muslims will go on a rampage of murder and mayhem if anyone in the civilised world should exercise their right to freedom of expression as the horrific events at the offices of the Charlie Hebdo satirical publication in Paris has demonstrated.

Those government leaders and the other apologists that had the gall to attend a so called Unity March in Paris yesterday have nothing to say when the Prophets, Saints and Saviour of the Christian faith are slandered, demeaned and insulted, sometimes in the vilest possible manner.

The fact that the heads of Martin Scorsese and the Monty Python team remain firmly fixed to their shoulders highlights the fundamental difference between the civilised Judeo-Christian world and the backward, barbaric Muslim world.

This is one of the many reasons that these two fundamentally different worlds are now and always will be incompatible.

The issue of so called moderate Muslims is no longer relevant as their silence and lack of effective action against their co-religionists isn't stopping the bloodshed of innocent people.

Freedom of expression is a fundamental freedom taken for granted in the civilised world and it is one of the corner stones of free, democratic societies. The opposite is true for Islam where the Koran as interpreted by the theocracy is the one and only law where those who refuse to submit must be held in servitude or be killed.

The latest killings around the world culminating in the Charlie Hebdo atrocity has caused the 'political winds to shift in an ugly direction' with people losing their fear of political correctness and taking to the streets in protest at the Islamification of their towns and cities.

It is decision time for the political class who are currently using Islam and Muslims to impose 'multi-culturalism' on their long suffering populations who weren't consulted, didn't ask for it and don't want it.

“ I will stand with them should the political winds shift in an ugly direction.”

Audacity of Hope  - B. Hussein Obama

To lighten up we'll finish on a funny note, Bigus Dickus from the Life of Brian.

Posted by Daniel Thomas at 2:09 PM