Last March Of The Hypocrites - But Where's Obama? 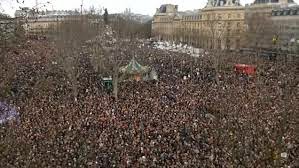 Apart from being the biggest gathering of hypocrites ever assembled in the same place at any one time, the recent misnamed Unity March in Paris will be notable for three things in particular:

i) Apart from Israeli Prime Minister Benyamin Netanyahu who has to deal with Muslim terrorism every day, it was nothing more than a photo opportunity for the Premiers of Europe who will do absolutely nothing to change the disastrous course that has led to the rise of jihadis in their respective countries.

ii) The march will not stop the attempts by these same political leaders to muzzle the press, to limit freedom of expression and to close down debate on contentious issues which questions the unpopular agenda's they are imposing upon their citizens.

iii) The unsurprising absence of the so called leader of the free world or any other senior official from the now 'fundamentally transformed' United States of America.

This will be the last March of the Hypocrites the world will witness. The peoples of Europe, if not the civilised world as a whole, have woken up to the dangers of the Muslim fifth columns in their midst together with the cynical use of this community by an agenda driven political class as a battering ram to impose so called 'multi-cultural societies'.

Anyone with a modicum of decency will have watched the stomach churning hypocrisy of the political elite as they milked the mass outrage for all its worth. They participated in this charade with the intention of fooling the world that they actually sympathise with the freedom of expression as exercised by the murdered Charlie Hebdo staff, or that they oppose radical Islam.

France's socialist President Francois Hollande can barely disguise his personal hatred of Jews along with his support for pro-Palestinian terrorist organisations. With no effective preventative action from Hollande, anti-semitism in France has reached Vichy levels with the Jewish community fleeing for their lives in ever increasing numbers.

Hollande's hatred for Netanyahu and the Jewish people manifested itself with his ban on the Israeli Prime Minister attending the march. In a calculated insult to every murdered Jew, Hollande invited Mahmoud Abbas, the leader of one of the world's most blood drenched terrorist organisations, the Palestinian Liberation Organisation (PLO), after Netanyahu signalled his intention to attend regardless of Hollande's ban.

British Prime Minister David Cameron's contribution to a free press was to set up the Leveson inquiry into Press ethics. Ostensibly this was to deal with phone hacking but in reality it was to instigate government controlled regulation on behalf of political operators and celebrities who wanted to keep their dodgy shenanigans secret.

His cynical manipulation of "Je Suis Charlie" for self publicity reasons becomes apparent with his proposed 'Snooper's Charter' legislation. This will give the government unfettered access to British citizens' private phone calls, emails and social media activity.

If this isn't authoritarian enough Cameron wants to end the peoples ability to communicate privately by banning any form of encrypted communication while attempting to regulate Bloggers with a requirement that political commentators register with the Electoral Commission.

Cameron's use of Muslims to downgrade and eventually erase Great Britain's Judeo-Christian heritage in order to impose multi-culturalism on the people is now the stuff of legend. Apart from ignoring the preachers of hate while they radicalise young people, and by indulging every Muslim demand he is using rigidly policed political correctness to harass and silence any dissenting voices.

His assertion that there are too many white Christian faces in civic society, the establishment and British institutions is incontrovertible proof of Cameron's commitment to the cultural replacement agenda. 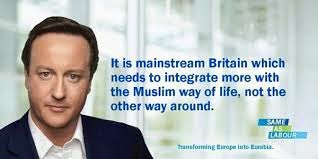 No matter what atrocities  are committed by radical Muslims, David Cameron and German Chancellor Angela Merkel are committed to using their Muslim populations to impose 'multi-culturalism' on their citizens without their consent. The German people are rising up against the spread of semi-autonomous Muslim ghettos and are taking to the streets in ever increasing numbers to voice their opposition.

Danish socialist Prime Minister Helle Thorning-Schmidt is presiding over a country that has succumbed to Islamification and Muslim violence but she takes no action. Cultural replacement using imposed multi-culturalism takes precedent over the safety and well being of the indigenous Danish population.

The same is true for Sweden, Norway, Belgium, the Netherlands and France etc.

Cameron, Merkel and every other European leader who participated in the "Je Suis Charlie" choreographed photo-opportunity are taking no effective action to stem the tide of immigration from backward Muslim countries like Somalia, Yemen, Pakistan etc. despite the widespread knowledge that these people hate the west, reject western values and will not integrate.

They are taking no effective action to dismantle the infrastructure of mosques, madrassas and hate preachers that are radicalising Muslims thereby ensuring an endless supply of hate filled, motivated jihadis ready and willing to commit murder and mayhem in the name of Allah.

Western and European governments are still arming these jihadis with passports allowing them legitimate travel between their 'home' countries and the killing fields of the Middle East and Africa, This act promises to be one of the most potent weapons for bringing the Muslim jihad to the west and one has to wonder whether it's an act of jaw dropping stupidity or deliberate policy.

Anyone with an ounce of sense knows it's coming so whether it is stupidity or deliberate policy, no amount of Unity Marches or "Je Suis Charlie" campaigns is going to absolve these politicians from blame when terrorists strike and shed innocent blood in the heart of their respective countries.

Finally, where was President Obama, the so called leader of the free world? It's not like him to miss a photo opportunity. The sad fact is that by their words and actions Obama and his administration have revealed that they are consumed with hatred for western civilisation, especially America.

Unity Marches in Europe are a distraction from his more critical agenda. This is not only to disengage from the developed world but to down grade or 'fundamentally transform'  America from the Judeo-Christian culture of liberty and free enterprise that made it one of the greatest countries in all of history into something resembling the third world.

To Obama and his acolytes the American dream of hard work with eventual success and prosperity for all is offensive to their socialist sensibilities. A disarmed, dependent population addicted to 'free stuff' is much more to their liking.