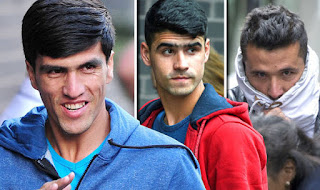 The importation of unvetted, testosterone fueled young men of fighting age into Great Britain using the pretense of saving vulnerable children is not only a demonstration of the contempt the political elite have for the people but also a demonstration of the depths to which they will sink in order to impose their long planned cultural replacement agenda as part of the UN/EU borderless global government.

As the victims of mass immigration from the third world know from bitter experience the political elite are totally heartless and without an iota of compassion; they couldn't care less about the raped or the murdered innocents be they adults or children. They are fanatics totally dedicated to their globalist agenda and the downgrading of western civilization.

They will use every dirty trick in the book, including lies and insidious propaganda, to achieve their malevolent ends. This includes using and abusing the inherent compassion of decent people toward vulnerable children.

They began their latest bout of malign deviousness when they used the stage managed dead 'baby on the beach' and the dust and blood covered 'ambulance boy' to unleash that inherent compassion for suffering children. They then sent the millionaire celebrity, Lilly Allen, to the Calais economic migrant holding centre to broadcast an apology on behalf of the British people along with an embarrassing choreographed weepfest of crocodile tears.(See it here) 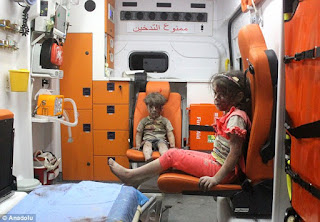 Simultaneously the political class and the usual rabble of millionaire bleeding heart hypocrites such as Saints Geldof and Bono, Emma Thompson and the rest of the acting community, along with the Archbishop of Canterbury and an assortment of liberals, socialists, communists, anarchists and those that go around the world referring to themselves as 'progressives', repeated ad nauseam, the PR authored soundbites about Great Britain's 'need to do more for unaccompanied children' and the usual nonsense about 'taking our fair share of refugees'.

It is worth asking at this point, what exactly is the fair share of refugees for a bankrupt, overcrowded island in the North Atlantic compared to the oil rich Gulf States, Japan, South Korea, China, India, Brazil or Singapore? These countries have not accepted any share whatsoever, fair or otherwise. Neither has the nations of Indonesia, Malaysia, Thailand or the Philippines who have majority or sizable Muslim populations.

It would appear that it is the sole responsibility of the Judeo-Christian western countries of Europe, the USA and Australasia to take these economic migrants who have vowed not only to reject integration but to impose their way of life and barbaric sharia law on the host countries by violent means if necessary.

The British people reacted with predictable horror when the first busloads of 'vulnerable children' turned out to be the young male adults of fighting age mentioned above. One would have thought that the most vulnerable children in a lawless camp of migrants populated mainly by hormonal young Muslim men would be women but none arrived. (See here)

The response by the political elite was so predictable it was embarrassing. They mobilized their main stream media propaganda machine to insult and smear those who pointed out the calculated deceit as heartless bigots and...yes, you guessed it...racists.

Now a taxpayer funded BBC celebrity, multi-millionaire Lineker accused the concerned British public of being "hideously racist and utterly heartless" while fellow multi-millionaire TV celebrity Morgan really cut loose by posting that "the way to make room in Britain for desperate refugees is to deport all the white trash racist scum".(See Lineker here and Morgan here)

These two anti-British high profile celebrities have not, at time of writing, backed up their words with money from their own vast fortunes, or accommodation for these 'vulnerable children' in their own substantial residential properties. They are not only hypocrites and bought-and-paid-for media whores from the government propaganda machine, they are also low life pimps from the refugee industry who are using the resultant publicity to increase their personal fortunes. (Read about it here)

Instead of addressing the just concerns of the people the government has refused to take any action however minor to stop the influx of adult males who pass themselves off as children. They have refused to use the latest computer recognition technology or to carry out rudimentary physical checks including age confirming dental checks.

Government operatives and spokesweasels claim these checks are 'too invasive' but this is the same government that put sick and disabled British citizens through invasive and humiliating Work Capability Assessments to ensure the veracity of their claims for government assistance which includes Employment and Support Allowance including Sickness benefit. (See here)

While refugees qualify immediately for a raft of welfare benefits sick and disabled people, including cancer victims, have had government assistance and benefits reduced or withdrawn completely because they have been assessed as fit for work. Some genuinely sick and disabled people have committed suicide in despair as a result of these assessments.

As an indication of the government's determination to carry on with the importation of adult 'refugees' disguising themselves as children they have ordered the taxpayer funded BBC and the mainstream media to pixelate their faces and built a wall at the asylum seekers processing centre to prevent the people seeing their obviously adult faces. (See here)

More disconcerting is the promise by ISIS and other groups of Islamic jihadis to position their killers into Great Britain and other western countries disguised as refugees as and when they are cleared from their strongholds in Iraq and Syria.

This is further proof that the fundamental transformation of Great Britain and the west is an absolute priority for the global political elite far above the safety and security of law abiding citizens who will be considered as collateral damage in the future bloodshed that is all but inevitable.

In conclusion it is worth reminding the American people as they head for the polls on November 8th; Hillary Clinton has vowed to carry on with the Obama fundamental transformation of their beloved country by amnesty and dismantling what is left of their borders. This includes not only the continuation Obama plan to import over 110,000 unvetted refugees from Syria but with an increase of 550%.

The UN global political elite are showing no signs of changing or even slowing down the importation of incompatible third world immigrants into the developed world and thus the descent of western civilisation into oblivion will continue apace.

Posted by Daniel Thomas at 9:45 AM