America Could Teach Africa A Thing Or Two About Corruption 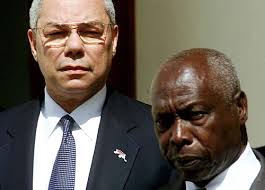 The revelations by Wikileaks confirmed what informed commentators have known for some time, corruption exists throughout public life in the USA but it is the extent of it that has taken many by surprise. It would appear that the once hallowed government agencies are rotten to the core. These departments have been manned by cronies and political appointees dedicated to subverting the Constitution in order to usurp power and bring about the UN mandated fundamental transformation of America.

Until recently nobody in their right mind would have suspected that the Federal Bureau of Investigation, the Justice Department, the Central Intelligence Agency, the once revered military and the Internal Revenue Service have been politicized to the point they are no longer fit for purpose.

No corrupt government would survive long unless the information disseminated to the public is controlled and manipulated to suit that government's agenda. This current election cycle has demonstrated beyond any shadow of doubt that the mainstream media in America are so utterly corrupted and stuffed with compliant sycophants that a free and fair election is no longer possible.

The only recourse for the people are their Houses of Congress, but even the peoples' elected representatives within have been rendered powerless by bribery and corruption and an all powerful Chief Executive armed only with a pen and a telephone.

Watching in despair at the corruption of the democratic process and the usurpation of power by Hillary Clinton and the Democratic Party has made me nostalgic for the years I spent trying to be functional while surrounded by absolute corruption in Africa.

As a former resident of several African countries including Nigeria, Kenya, Uganda, Zimbabwe and others, I consider myself an expert at living and dealing with corruption at all levels of private and professional life. If there are going to be crimes against humanity then corruption by governments and its officials around the world should be up there with the worst of them.

If the latest polls are correct the efficiency and sophistication of the corrupt Democratic Party machine will deliver the Presidency to Hillary Clinton and her criminal cartel and with it the Judicial branch and the entire future of the Republic.

Americans voting for Hillary Clinton and the corrupt Democratic Party should be made aware of the fact that corruption in Africa has blocked all avenues for economic and social development, while looting the public Treasury by the political elite and their cronies keeps the citizens in perpetual abject poverty.

The more dangerous and depressing aspect of corruption is that it allows the elite to use dirty money as a means to usurp political power, disenfranchise the people and maintain control over the government and it's machinery in perpetuity.

One of the hallmarks of corruption in African countries, and the reason political power can be perpetuated, is the appointment of family members, cronies and sycophants into positions of power throughout the government machinery, especially the armed forces, the judiciary, law enforcement, the Federal Reserve as well as controlling positions in the banks and other major public and private industries.

As is the case with America today, corruptocrats in Africa also control the media to the extent that bought-and-paid-for advocates portray Presidents as benign benefactors who are halfway to divinity and any opposition figures as devils incarnate.

On a darker note, any signs of opposition are strangled at birth through smear, fear and intimidation. If any opposition movement does happen to gain public support or any sign of traction, however minor, covert assassination and outright murder are not unknown.

For my sins I happen to have been living and working in Kenya May 2001 when the then Secretary of State, Colin Powell, made a visit which, rumour had it, was to arm twist corrupt dictator Daniel arap Moi into retirement after more than two decades of absolute power.

The hopes of the Kenyan people were that Secretary Powell would be successful and Moi's demise would herald a new era of propriety, good governance and a bright, prosperous future.  (See here)

Unfortunately it was not to be, corruption permeates the institutions to saturation point and becomes so ingrained that changing the man at the top has little or no effect. Corrupt governments are almost impossible to remove without tearing them down, salting the earth and starting again.

The lesson for the American people is that once a corrupt organization usurps power it inserts itself into all aspects of government, both local and federal, and bends the institutions to its will, sidelines the Constitution and neutralizes any opposition. This transfers political power from the people to itself consolidating it's grip on power until such time as it is forcibly removed.