London Bloodshed - Move Along Its Just Another Muslim Atrocity 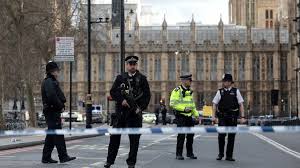 Nobody should be shocked or surprised by the slaughter of innocents in Westminster, London yesterday since jihadi’s from the myriad of welfare financed Muslim ghettos have been threatening murder and mayhem since their mass immigration into Great Britain during the 1960’s and 70’s.

Their war against the west has been ongoing since the desert warlord, Mohammad, founded the death cult back in the early 7th century as a perverted mockery of the Judeo-Christian faith.

The only surprise thus far is fact that the political class haven’t tried to censor the news or absolve Islam from blame for this atrocity. It’s only a matter of time before some spokesweasel for the political class dusts off the usual soundbites and declares that ‘this is nothing to do with Islam’ and the equally insulting ‘Islam is a great global religion of peace’.

Emerging from the safety of her bunker and surrounded by armed guards, Prime Minister Theresa May made a stage managed appearance outside No. 10 Downing Street and delivered a pre-prepared statement that was most likely written shortly after the last atrocity in readiness for this one. (See and read it here)

Apart from praise for the first responders it was a couple of minutes of meaningless drivel read from a sheet of paper and robotically delivered with the rehearsed faux gravitas we’ve come to expect from a machine politician. It contained the usual offering of condolences along with thoughts and prayers for the victims and their loved ones.

(It must be noted that calling for prayers goes against public policy since the act of praying is deemed to be offensive to a variety of progressive groups and banned from most public institutions.)

As expected Mrs. May made a pitch for multi-culturalism with a risible paragraph that is blatantly untrue and designed to create the image of the London as a Utopia of peaceful co-existence between diverse people. 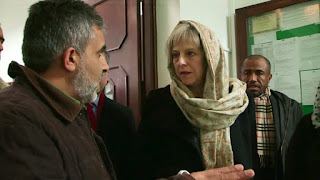 Mrs. May intones that “The location of this attack was no accident. The terrorists chose to strike at the heart of our Capital City, where people of all nationalities, religions and cultures come together to celebrate the values of liberty, democracy and freedom of speech”.

The truth is that our Capital City is infested with mono-cultural ghettos and no-go areas where these different nationalities, religions and cultures do not celebrate any values other than the ones they have imported from the hell holes they left behind. They fiercely guard their own territories with intimidation and violence where turf wars are not uncommon.

Due to white flight into the suburbs and neighboring counties London is now a white minority city with a Muslim Mayor who indulges in the practices imported from his home country of Pakistan. The segregation of women at his public meetings is now the norm.

Mayor Sadiq Khan is an odious creature who doesn’t think that Londoners should be concerned by the murder and mayhem perpetrated by his co-religionists; he believes they should just accept it as ‘part and parcel of living in a big city’. He made these insensitive and offensive remarks in response to the 9/11 atrocity in New York. 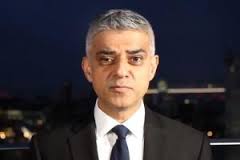 As an apologist for Muslim violence Khan went on to say that “it’s a reality I’m afraid that London, New York and other major cities around the world have got to be prepared for these sorts of things”.

For the benefit of Mayor Khan and his supporters; Islamic terrorism is not part and parcel of living in big cities that happen to be devoid of large numbers of Islamists such as Tokyo, Seoul, and Hong Kong. (Khan's offensive idiocy here)

Prime Minister May’s assertion that different nationalities, religions and cultures come together in London 'to celebrate the values of liberty, democracy and freedom of speech' is deluded nonsense far removed reality.

Democracy has been so debased by electoral fraud, ballot rigging and bogus registration that it prompted one judge to compare Great Britain to a banana republic. The debasing of democracy on such a scale became routine after the borders were thrown open to mass third world immigration.

Ballot rigging, fraud and bogus registration is widely accepted as fact but Mrs. May, along with previous governments, refuse to take any action to stamp it out.

Along with all the other countries being governed by the European Union, censorship is the order of the day and freedom of speech is coming under attack from all angles especially with regard to speaking the truth about the religion of peace.

One has to wonder what backroom PR operative wrote the meaningless nonsense Mrs. May blathered on about in her statement.

Exactly what does "the streets of Westminster being ingrained with the spirit of freedom" actually mean? And how on earth does ‘the values our Parliament represents – democracy, freedom, human rights, the rule of law – command the admiration and respect of free people everywhere’ help the bereaved and the injured come to terms with their plight?

The Parliament she refers to, especially the unelected House of Lords, is den of iniquity infested with villains, perverts, fornicators, expense cheats, common criminals and self-serving career politicians who put their own interests above those of the people they are meant to serve.

Celebrating the values of democracy indeed! This is the same Parliament that has surrendered the peoples’ sovereignty to a cabal of unelected bureaucrats in Brussels and who are currently engaged in overturning the mandate from British people by sabotaging the exit from the European Union that was voted for in a democratic referendum.

The most offensive paragraph in this parable of nonsense was the one about Parliament meeting as normal and Londoners getting up out of bed and going about their daily lives as normal also. With all the seriousness she could muster Mrs. May tells us "they will board trains, leave their hotels and walk the streets. They will live their lives". Is she seriously expecting informed people to be taken in by this rubbish?

Unlike the people of London who have been disarmed and left defenseless against the people sworn to kill them, Mrs. May and the rest of the shysters that infest Parliament are protected by a comprehensive security apparatus which includes armed guards therefore the chances of them being killed or maimed by a radical Muslim are negligible.

What Mrs. May’s statement did not contain was any mention of Islam or any action to stop the carnage. The course toward a so-called multi-cutural society has been set and it will not be varied or reversed by Mrs. May or the political class.

The importation of battle hardened troops from the middle east and African war zones will continue unabated; mosques and madrassas will remain open and continue indoctrinating the next generation with hatred for all non-Muslims and preachers of hate will continue to call for the rape, mutilation and murder of innocent British citizens in the name of Allah, as commanded by their prophet and as written in the Koran.

What is certain is that due to the inaction of the political class and their determination to impose multi-culturalism on the British people, the next victims of the Muslim jihad are already walking the streets completely unaware that they are going to be killed or maimed after which Mrs. May will deliver yet another meaningless statement containing nothing of value whatsoever.