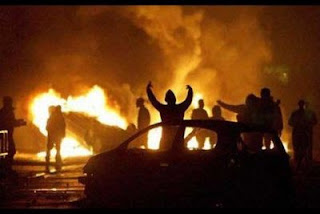 Despite censorship and information control across the European Union news from the Geller Report that the National Police Chief of Sweden, Dan Eliasson, is pleading for help to deal with the outbreak of violent civil unrest comes as no surprise to Sweden watchers and journalists from the free media.

What does come as a surprise is its severity as illustrated by Mr. Elliasson when he warned that Swedish police forces can no longer uphold the law and pleaded with all good forces in the country to support them. It is even suggested that outside forces may be required such is the Swedish authorities inability to cope with the insurrection.

The desperate situation is further emphasized by Johan Patrik Engellau, a research expert regarding destabilized countries who is quoted as saying “I’m afraid it is the end for the well-organized, decent and egalitarian Sweden we have known up to now. Personally, I would not be surprised if a form of civil war occurs. In some places, the civil war has probably already begun”. In other words Sweden is finished.

It’s difficult to imagine that an advanced European country with a centuries’ old sophisticated culture could descend into third world barbarity and civil war in a matter of decades.

What’s more difficult to comprehend is that the Swedish people did this to themselves with hardly a squeak of protest until now when it’s too late.

They must be the dumbest people on the earth when they believed their ‘progressive’ political class who ordained that their ancient Swedish culture and way of life was moribund and must be replaced with a so-called ‘multicultural society’.

It’s a wonder that the Swedish people didn’t string him up for treason when their former Prime Minister, Fredrik Reinfeldt, claimed that Sweden’s borders are fictional and that Sweden belongs to the immigrants that come here – not the Swedes. (See his statement here)

One cannot ignore the role of the UN in this disaster since the destruction of Judeo-Christian civilization across Europe is an absolute necessity if their egalitarian, borderless one world project is to become a reality.

Evidence that the descent of Sweden into a poverty ridden third world hell-hole has been deliberately engineered by the Swedish government at the behest of the UN is incontrovertible.

According to the UN’s own projections Sweden will become a third world country by 2030 but they are doing nothing to halt the decline. In fact the opposite is true, they are actively encouraging it.

Obviously the global elite believe that a poverty stricken country riddled with disease and hunger on European continent is what the world needs at this point in time. (See the report here)

The German Chancellor, Angela Merkel, is joined in her insanity by former Swedish Minister of Finance, Anders Borg, who said in 2013 that he hoped Sweden will look like Africa in ten years.

His epiphany for the Africanisation of Sweden came about during a visit to Lagos, Nigeria, where he noticed the beautiful colors of the African ladies dresses compared to the reserved and dull dresses of their Swedish equivalents.

He also explained that in ten years’ time it will look like Africa throughout Europe and that Europe will be better than it is now, and more multi-cultural.

(On a personal note; for my sins I spent some time in Nigeria during my expatriate career and I can assure readers that this is not a country one should aspire to emulate) This poster child for 'progressive' lunacy takes self-hatred and delusion to the point where he must be certifiably insane and it’s a wonder he hasn’t been sent to the funny farm long before now. (Read this nutjob's lunacy here)
President Trump was ridiculed by the political class when he highlighted the fact that Muslim controlled no-go zones exist in cities across Europe, an existence which was roundly denied by the said political class and their various mainstream media propaganda machines.

A leaked report from Sweden concludes that the number of lawless areas in Sweden now totals 61. This is up from 55 in just one year. Lawless areas being a politically correct term for sharia controlled no-go zones.

According to the UN Sweden is the best example of a peaceful multi-cultural society despite it being acknowledged as the rape capital of the world and in the midst of a civil war.

The truth is somewhat different in Great Britain and across Europe. Autonomous, welfare-financed Muslim ghettos are infesting all the major cities which serve as breeding grounds for radical Islamic terrorists on the home front as well as recruiting grounds for terrorist groups such as ISIS, Hezbollah and Al Shabaab for wars abroad.

As the people of Europe know to their cost, especially those in Great Britain, France and Belgium, it was terrorists from their Muslim ghettos that dealt out death and destruction to their innocent compatriots and supplied soldiers of Allah to fight in the Muslim wars across the Middle East, Africa and central Asia.

To make matters infinitely worse, and with a complete disregard for the safety of their citizens, the political class allow these battle hardened killers to use their legal documentation to return ‘home’ with their blood lust and devotion to Islam intact.
Not that the political class will ever admit it but the civil war in Sweden is a disaster which is unfolding across the rest of Europe and it is a direct result of their agenda to impose ‘multi-culturalism’ on people who didn’t ask for it, weren’t consulted and don’t want it.

Their response to this human and cultural catastrophe is to employ censorship to deny its happening and to harass and intimidate those individuals brave enough to expose the truth and voice any contrary opinions.
.
Read about mad Merkel’s censorship here

This dictatorial behavior and appeasement of the violent Islamic terrorists in their midst will serve only to enrage the people further bringing civil war across Europe an ever closer reality; this in turn will make the Swedish civil war look mild by comparison.

Posted by Daniel Thomas at 1:37 PM