Brexit Election Disaster - Theresa May Takes A Dive For The Globalists 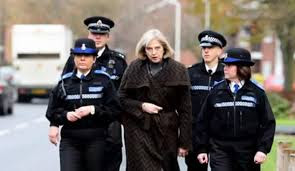 As the dust settles and the recriminations begin after the disastrous general election results where British Prime Minister, Theresa May, managed to blow a twenty-four point lead and almost handed political power to the far-left Labour Party led by lifelong communists Jeremy Corbyn and John McDonnell.
Bearing in mind that she is a seasoned politician experienced in electioneering and backed by an efficient, well financed election machine, her failure to dispatch a rag bag of communists, wealthy metropolitan progressives and venal career politicians into the dustbin of history is all the more surprising…..but only to the layman.
Informed political observers saw through her carefully manufactured image along with the PR and associated spin and saw Theresa May for what she really is, i.e. a ruthlessly dedicated globalist from the Blair/Cameron/Obama school of ‘progressive’ treachery who is as dedicated to the European Union and the associated UN controlled borderless one world government as they are.
This was billed as the Brexit election called by Mrs. May to strengthen her mandate thereby giving her a strong position for the up and coming Brexit negotiations. The fact is that she already had a mandate and her negotiating position could not have been stronger.
The strong and growing British economy compared to the disastrous Eurozone put her in the position to dominate the negotiations and walk away if the EU bureaucrats persisted in punishing the British people for their temerity.
With an overall majority in the House of Commons and Brexit set in law, this election was unnecessary but by accident or design Theresa May has made it possible for the treacherous political class to sabotage the negotiations and prevent Brexit altogether.
Increasing numbers of pundits, myself included, believe this loss was by design hence the boxing analogy in title. The term ‘taking a dive’ refers to a boxer who despite being the favourite to win throws the fight under pressure from malign influences outside the ring.
The malign influence in this case was the EU/UN globalists.

Mrs. May’s lifelong dedication to the European Union project and the broader UN one-world government; her support for their policies of open border mass immigration, imposed multi-culturalism and Islamification should have given an inkling that she would never deliver Brexit as demanded by the British electorate.

As Home Secretary her record of broken promises and inaction on signature issues such as mass immigration, Islamification, Foreign aid, etc. proves beyond any shadow of doubt that she took her orders from the globalists not the British people.
One big clue was her refusal to start the two year Brexit process by triggering Article 50 of the Lisbon Treaty until the anti-Brexit forces had regrouped, mustered their forces and organized their campaign to frustrate and ultimately prevent Brexit.
Had she triggered Article 50 immediately as promised by her predecessor, David Cameron, there would have been fewer obstructions, no challenges in courts and the process would almost be at the half-way stage.
With negotiations about to begin, the timing of the election and the appalling campaign, which included fox hunting and the confiscation of family homes to pay for elderly care, labelled the dementia tax, lends further credence to the charges that Theresa May deliberately alienated millions of voters in order to throw the election and sabotage Brexit.
Correspondents and pundits, myself included, took a lot of flak for warning that as a globalist Theresa May is a dedicated Europhile who will obey her masters in Brussels and New York and sabotage Brexit.
Naysayer and pessimist were two of the mildest charges hurled in my direction. Have faith in Theresa May and give her the benefit of the doubt I was told. I take no pleasure in saying I told you so but warnings by myself and others went unheeded.
On June 30th, just one week after the referendum, it was obvious that humiliated Prime Minister David Cameron would resign and be succeeded by Theresa May, I wrote then that Mrs. May could not be trusted to deliver Brexit so leave your champagne on ice (See here)

Further articles, and flak, followed but fell on deaf ears:

Brexit In Danger – Is Europhile Theresa May Manoeuvring To Remain. September 6th 2016

Brexit Denied – If Voting Made Any Difference They Wouldn’t Let Us Do It. November 5th  2016

Fighting Brexit – Elite Choose The Evil One To Lead Their Campaign. February 21st 2017

Email ThisBlogThis!Share to TwitterShare to FacebookShare to Pinterest
Labels: Brexit, Theresa May