Brexit Betrayal - A Once Great Nation Destroyed by The Ruling Elite 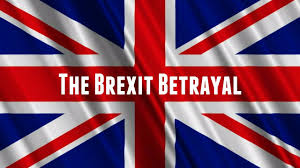 Conservative Members of Parliament are threatening to resign and bring down their own government if taking Great Britain out of the European Union under World Trade Organization (WTO) rules becomes an option. This speaks volumes about the integrity of the ruling political elite and their fanatical dedication to the EU nation building project.

Led by Anna Soubry, an ill-tempered, intolerant elitist, this cabal of dedicated Europhiles were elected on a promise to implement the result of the Brexit referendum. They were also Members of the Parliament that authorized the triggering of Article 50 of the Lisbon Treaty which officially started the two-year leaving process.

Since the referendum result, they have insulted and smeared their colleagues, and the constituents that voted them into office, and done everything in their power to block Great Britain’s exit at every turn.

If they carry out their threat, they are fully aware that this will destroy the Conservative Party and hand political power to the communist led Labour Party. Most experts agree that their policies will crash the economy, but they too want to ignore the Brexit referendum and keep the British people locked inside the corrupt and failing EU.
To Soubry and the Europhiles this disaster is obviously a price worth paying to keep their nation building project alive.

As a measure of their dishonesty and total lack of integrity, these Europhile extremists will bring down their own government for implementing the official party policy on which they stood for in the election and subsequently voted into office.

Although they are as rare as rocking horse droppings, any honest politician who disagreed with official party policy would have said so at the time, not campaigned for it during the election only to abandon it when they took office.

As these Europhiles know, a successful and prosperous Great Britain free from the shackles of the Brussels bureaucracy will encourage other nation states to question the benefit of EU membership and encourage them to leave thus ending their dream of a centrally controlled superstate.

Such is their fanatical loyalty to their United States of Europe, Soubry and her fellow collaborators are prepared to let Great Britain be destroyed rather than let it succeed and their superstate dream fade.

If they are successful in securing a second referendum to overturn the result of the first and Brexit is blocked it will signal an end to democracy, Parliament and government with the consent of the governed. It will divide the country to such an extent that all semblance of a United Kingdom will be lost.

If this comes to pass the sleeping dragon will awaken and the yellow vest protests that have engulfed France and other parts of the EU will seem like a vicar’s tea party.

I will conclude with a quote by one of the most unjustly reviled politicians in recent British history:

“As I look ahead, I am filled with foreboding. Like the Roman, I seem to see "the River Tiber foaming with much blood" – John Enoch Powell MBE


Update: An interesting article on the Conservative Party split here