Vassal States - EU Robs Nations of Their Sovereignty and Dignity 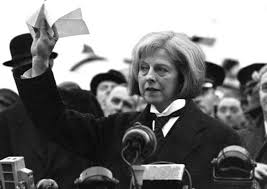 Spirits in Europe were raised to the heavens when it was announced that the reign of Angela Merkel, the fanatical German Chancellor, was coming to end only for them to be dashed when she appeared in the puppet European Parliament she controls advocating the formation of a European Union (EU) army.

Although it’s been vehemently denied for decades, it is common knowledge that the EU would have to establish a military force independent of NATO if its quest to become a sovereign nation state was to be realized.

Since, in theory, the British will no longer be members of the EU and no one in their right mind will countenance a German led military machine in Europe, it will be down to France to lead the charge should America, China or Russia decide to invade the corrupt and failing EU.

Although he might think otherwise, the silly little boy President of France, Emmanuel Macron, is no Napoléon or Charles de Gaulle, so the history writers of the future would have a field day should battle commence on the continent.

Nations take enormous pride in their armed forces and hold their heroes and heroines past and present in the highest esteem. Therefore, having one’s armed forces put under foreign control is the ultimate insult and the most humiliating consequence of a nation having its sovereignty removed.

The establishment of a European Union military is just one aspect of the transfer of sovereignty from the national Parliaments and legislatures to the unelected ruling bureaucrats in the Brussels autocracy.

In the biggest deceit ever perpetrated on the British people the government of the then Prime Minister, Edward Heath, denied that any sovereignty at all will be transferred from the Westminster Parliament to Brussels after accession to the then Common Market in June 1975. This is in despite of advice to the contrary from the Foreign and Commonwealth Office contained in document FCO 30/1048. (See here)

This recently released document was kept hidden from the British people for almost half a century by consecutive governments while their sovereignty was surreptitiously transferred to Brussels.

While some politicians are still denying that this transfer of sovereignty has taken place, some maintain that even if it has taken place it has had no detrimental effect on democracy or the British people’s right to self-government.

Economic sovereignty has already been surrendered in the Eurozone leaving member states powerless to make their own budgets. This has been a disaster for nations such as Greece, Italy and Spain who cannot compete with the German and French economies but cannot budget accordingly. This leaves their own citizens in such poverty and despair their only option is to migrate in order to have any hope of a prosperous future.

The sovereign right to trade with other nations has been surrendered to the European Commission who act in the interests of the big banks and the multinationals not the ordinary citizen.

National jurisprudence has been surrendered to the European Court of Justice which is occupied by political activists who are fanatical disciples of the European empire building project. With the pan European Arrest Warrant the ancient right of Habeas Corpus enjoyed by British citizens for centuries has been surreptitiously removed.

Slowly but surely sovereignty over international diplomacy and security is being surrendered since the creation of the grandiose sounding High Representative of the Union for Foreign Affairs and Security.

In a blatant power grab which diminishes our influence in the world, the empire builders are demanding Great Britain surrender its seat on the UN Security Council to an EU bureaucrat.

The surrender of territorial sovereignty is the worst and most damaging surrender of all. Surrendering control over national borders has been a complete and utter disaster for the people of Great Britain and the other nation states of Europe.

The mass immigration of economic and culturally incompatible migrants from the developing world and the poorest countries in the EU has resulted in depressed wages accompanied by shortages of housing, school places, health care provision and other desperately needed social services.

The most horrific consequence of surrendering control over borders and immigration has been the dramatic increase in violent crime which includes robbery, rape, violent sexual assault and murder.

In a single generation unheard of words and crimes such as beheading, female genital mutilation, honour killings, child brides, grooming gangs, jihad etc. have become part of the everyday lexicon of British vocabulary.

It cannot be denied that although some of the blame should be laid at the door of cowardly and treacherous politicians the bulk of the blame for this social, cultural and economic disaster lies with the fanatical and mentally unstable German Chancellor, Angela Merkel.

Opening the borders of Germany to all and sundry from around the world knowing that after obtaining documentation they were free to travel anywhere in the borderless EU was a calculated act of a malignant lunatic.

This is especially true after admitting some years previously that multiculturalism was a disaster that had failed in Germany.

In conclusion, nations that voluntarily surrender their sovereignty to a foreign political entity are also surrendering their dignity and with it the birthright of their citizens. In all of history there is nothing more undignified than a supine vassal state.

Posted by Daniel Thomas at 3:13 PM