The Military Won't Save Americans From ISIS - The 2nd Amendment Will

It is without doubt that the American military machine, both nuclear and conventional, is the most formidable on the planet. Even after evisceration and the social engineering program implemented by the ideologically driven Obama administration, it remains a formidable fighting machine.

The three branches, the air force, navy and army are equipped with technologically advanced equipment and manned by some of the bravest and most dedicated personnel who are a credit to the American people.

The primary purpose of this military machine is to protect the homeland and the American people along with allies and American interests abroad but looking at global events of the past decade it is failing to secure either.

In decades past any adversary, be they an apocalyptic Ayatollah or communist tyrant, insane enough to engage it in open warfare would be ensuring their own defeat and ultimate destruction. Today these same adversaries are more pragmatic and know they can defeat America without engaging the military machine in open warfare.

With the administration's steadfast refusal to use the overwhelming firepower at it's disposal to put the fear of God into the souls of it's adversaries, it hamstrings them with rules of engagement that are so narrow lawyers are ever present on any battlefield.

The new socially engineered military is openly mocked and no longer respected or feared to the point where the whole nation is taunted and humiliated in front of the entire world by the bullies and thugs of the Iranian Republican Guards.

The reasons for this are political and ideologically driven by a political establishment who are ruthlessly determined to implement their 'progressive' agenda of fundamentally transforming America.

Fundamental transformation was not just a empty slogan manufactured by spin doctors for electoral purposes, it's an actual agenda which can only be described as a revolution.

As mentioned previously, one of the primary purposes of this military machine is to protect the homeland and the American people.

At home, despite swearing an oath to preserve, protect and defend the Constitution, which has been the foundation of America's freedoms, it is being increasingly circumvented by the Obama administration; individual liberty is being replaced by collectivism, the free enterprise system by socialism and constitutionally limited government, by executive fiat.

Meanwhile, abroad, America has abandoned its traditional role as leader of the free world and withdrawn to focus on the fundamental transformation of society at home. Traditional allies have been replaced by former enemies leaving a vacuum which has been filled by the sworn enemies of America and the west.

The results are there for all to see; the Middle East and North Africa have disintegrated with ISIS taking advantage of the chaos to organise and spread their perverted cult to all areas of the world including the USA.

When ISIS are saying they are coming to America any which way they can, including posing as refugees, with the specific intention of causing murder and mayhem, it would be wise to take their word for it as opposed to the word of the political class or the spin and manipulation of the government-media complex.

When the government are using Islam and its adherents as a vehicle to fundamentally transform America, no amount of battle groups, submarines, air force squadrons or battalions will protect the people from killers bent on killing Americans in the name of Allah even at the cost of their own lives.

When the government refuses to seal the borders then proceeds to give sanctuary to illegal immigrants, including murderers, rapists and a host of other violent criminals, the America people are put at risk. 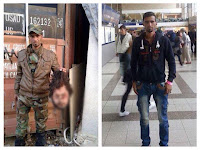 When the government refuses to properly vet so called 'refugees' despite the fact ISIS has made it known they will use the deliberately engineered 'crisis' as an opportunity to infiltrate its fighters into the USA, no amount of military might will protect the American citizen from murder while going about their legitimate business.

With a government that has disassociated Islam from every atrocity committed in its name, what use was the latest multi-billion dollar stealth bomber or hunter-killer submarine or Apache helicopter gunship to the victims of San Bernardino, Boston, Fort Hood or even the Twin Towers?

What use are drones flying for days over the Caliphate in Syria looking for ISIS targets when American people will be murdered at work or in a restaurant or at the cinema by ISIS operatives already embedded?

There is no alternative but for the people to protect themselves using their 2nd Amendment Rights before they are taken away by the ideologically driven administration who are determined to disarm the American people to bring them into line with the rest of the world in accordance with UN diktats.

The American people are unique in that they have the God given right to own a firearm to protect themselves and their families, therefore it is essential they take advantage of it, buy a gun and never, ever surrender it to the government or its agents.

Posted by Daniel Thomas at 1:02 PM