When German Chancellor, Angela Merkel refused to allow British Prime Minister David Cameron to act in the interests of Great Britain by reforming the rules for immigrant welfare claimants unless British low paid workers were punished in return, it was a stark reminder that the German Chancellor has as much power over the British people as Cameron or any other elected Member of Parliament.

The reform was intended to stop Great Britain's generous welfare entitlement system being a magnet to economic colonists from around the world who risk life and limb to claim their free money and which has been an unmitigated disaster for the British people and their way of life.

An even bigger disaster has been Merkel's open border immigration policies combined with the new quota system which Cameron is powerless to stop. This is designed to speed up the process of cultural and demographic replacement and the imposition of so called 'multi-cultural societies' on Great Britain and the other nation states of Europe.

Despite having the fastest growing population in Europe, Merkel and the EU bureaucrats have unceremoniously torn up Cameron's deal on asylum and are imposing quotas on Great Britain way in excess of the countries' ability to absorb them all.

By any measure this is not in the interests of the British people and only serves to undermine their safety, security and future prosperity. Therefore one is bound to ask what is the point of having a British Prime Minister and an elected Parliament when they are unable to act in the best interests of the people they have sworn to protect?

Modern students of history should study how a country that was roundly defeated in two world wars - the second of which left its cities, industry and infrastructure so utterly devastated its a wonder they survived - could rise up from the ashes and conquer the victors without a shot being fired.

The Marshall Plan rebuilt their devastated infrastructure however it was not needed to rebuild their ambition to dominate Europe because, as current events clearly demonstrate, that was never defeated.

It's astonishing how a British Prime Minister can be so weak and craven that he tugs a forelock to a German Chancellor who is well on the way to completing the vision of her predecessors, including the Kaiser and Hitler, to build a German dominated, Jew free Europe from the Atlantic to Urals. 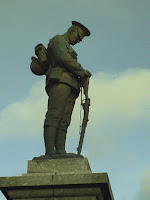 The memory of those hero's who made the ultimate sacrifice in these two destructive wars to keep Great Britain free and sovereign has been desecrated and despoiled by a treacherous political class who are intent on surrendering everything they died for.

Despite attempts to disguise the federalist aspirations of the European Union it is now common knowledge that the EU project from the outset was to abolish the independent sovereign states of Europe and replace them with a single state using the old Soviet Union as a template.
In many ways the United States of Europe is a sick parody of the United States of America whereby many of its historical symbols were hijacked in order to foster the impression they are similar entities. Hence the EU has 'Founding Fathers' and 'Constitution' along with Executive, Legislative and Judicial branches.

All phony of course because in reality the whole show is run by the unelected, unaccountable  European Commission which in turn is totally dominated by the German Chancellor, Angela Merkel.

A dedicated communist party apparatchik from the former Soviet puppet state of East Germany, Merkel is no friend of individual liberty, free enterprise or democracy and has a particular distaste for, and animosity towards, Great Britain and it's people.

Her utterances and actions are proof positive that Angela Merkel despises the British people's attitude and lack of conviction toward the European superstate project and as a consequence she takes it out on David Cameron by indulging in his public humiliation whenever he shows any sign of standing up for the British people he has sworn to represent.

Faced with this emotionless, agenda driven automaton it is vital that the British people have a representative that will put their interests above all other considerations, especially their safety, security and economic well being. They also need this representative to protect their culture, their heritage and their way of life.

What they've actually got is David Cameron, a craven careerist who has a lack of dignity and self respect and allows himself to be dominated and bullied not only by the German Chancellor but by other members of the EU politburo such as 'President' of Europe, Jean-Claude Junker, a career bureaucrat from Luxembourg and another 'President' of Europe, Donald Tusk from Poland. 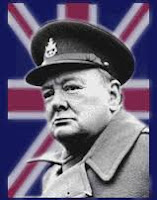 Mentioning David Cameron in the same sentence as Sir Winston Churchill is akin to blasphemy but inevitably comparisons will be made; it is however an exercise in futility as there is no worthwhile comparison that can be made.

While Sir Winston was a loyal servant of the people - steadfast and resolute in defence of Great Britain, along with it's heritage and way of life, David Cameron is the polar opposite who is actively engaged in surrendering all that Churchill and the British people fought for in two world wars.

What makes it incalculably worse is that he is surrendering it all to an enemy that was defeated at such a terrible cost.

He has also vowed to fight with his heart and soul to keep Great Britain inside this undemocratic German dominated superstate no matter what.

As the engineered 'refugee crisis' continues to blight the lives of the British and European people with rampant violent crime including rape and murder, Cameron and the elite show no signs abandoning their superstate project and this can only result in conflict as the people take it upon themselves to protect themselves and their communities.

Although it is censored by the government-media complex, many towns and cities across Europe are on fire as people rise up against the political elite including Cameron and Merkel.

Looking forward into the not too distant future, the intransigence of this political elite with respect to using open border mass immigration to achieve cultural and demographic replacement, it is putting the peace of the entire continent at risk.

Posted by Daniel Thomas at 7:38 AM