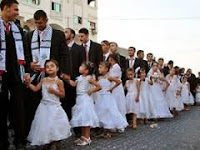 With violent attacks on women and children by depraved Muslim immigrants spiraling out of control throughout Europe, there isn't a more suitable day than International Women's Day for those feminists who are most vocal about the rights of their gender to stop the token displays of outrage and actually do something tangible to help the victims of Muslim misogyny.

The world waited with bated breath for some announcement or orchestrated public display of solidarity with the worldwide sisterhood but alas words and actions came there none.

Despite desperate attempts by the ruling elite to censor the ever more appalling attacks on women and young girls by their most indulged special interest group, it becomes more obvious by the day that the authorities are not only turning a blind eye but are actively allowing other barbaric Muslim practices to enter main stream life in order redefine our 'values' and 'who we are'.

One expects this of politicians with an agenda to impose but the deafening silence of the women's movement, along with their publicity seeking celebrity hangers-on, is an indication that their concern for their sisters is contrived, insincere and used for image enhancement purposes only.

Along with everyone else in the west who is paying attention to current events, the feminist movement is well aware of the institutional abuse of women in the Muslim world but stay silent when this abuse is imported into the heart of their communities. This is not only a betrayal of their cause but an acknowledgement that it's acceptable to certain members of the sisterhood.

It is an indication of their insincerity and phony concern when it takes male commentators such as myself to highlight the female abuse issues that the more vocal advocates of women's liberation studiously ignore.

Apart from spousal abuse, rape and stoning, the barbaric practice of female genital mutilation (FMG) is no longer confined to Muslim lands but rife in Great Britain. Official figures show that there were 1,316 new cases of FMG in 3 months and this, it is claimed, is the tip of the iceberg. The World Health Organisation estimates that worldwide cases will rise above 200 million this year.

FMG is not only illegal in Great Britain but it is also illegal to take girls abroad to be mutilated. Astonishingly, despite the increasingly large number of victims there has not been a single prosecution. Feminists talk about being opposed to FMG  but as their own propaganda proclaims "It's Deeds Not Words" that matter.

With child protection laws on the statute book in Great Britain and countless millions spent every year on child protection agencies, one would think that children would be as safe as a politician's pension fund but this is not the case.

When it comes to indulging the Muslim community and imposing 'multi-culturalism' no one is safe, not even children. Because the political class in Great Britain has surrendered the right to govern itself, child marriage is now legal due to European Union diktat.

How can they expect anyone to take them seriously when feminists in the British Parliament and in the EU have the power and voice to turn words into deeds but choose to remain silent instead of fighting with every fibre of their being to get this outrage repealed.

The grooming, rape and horrific sexual abuse of underage white girls by Muslim paedophile gangs continued on an industrial scale in Great Britain for decades with the full knowledge of government agencies. These included the police, the local authorities, the education establishment and most surprisingly of all the child protection agencies.

The perpetrators were all Pakistani or of Pakistani decent. The number of victims is beyond comprehension with 1,400 in the town of Rotherham alone. The Member of Parliament for Rotherham, Sarah Champion, believes there could be as many one million victims countrywide.

Although many of the gangs have been rounded up and prosecuted not a single police officer or government official has been prosecuted for aiding and abetting these horrific crimes against young girls.

Any reasonable person would think that the feminist movement would not rest for a moment until these public servants who let these children down so badly have been brought to book and paid for these crimes but they choose to remain silent.

Feminists in western countries are quick to accuse innocent men of male chauvinist piggery on the slightest pretext but remain mute when it comes to any denunciation at all of the crude, barbaric and violent misogyny that is ingrained in heart of not only radical Islam but mainstream Islam as well.

Muslims in western countries refuse to integrate, they set up their own autonomous areas governed by sharia law. Political activist in the British judiciary are incorporating some aspects of sharia law into British law.

In case the feminists are unaware, sharia is rigged against women; stoning to death is the punishment for rape victims, gays are executed with amputations and beheading a standard punishment for a variety of crimes which attract a mere prison sentence in the west.

It is acknowledged by all except the feminists and their hangers-on that women have little or no status in the Islamic world including among those who have taken root in the west. Wrapped in their burqas they suffer a life of indignity and continual abuse and violence.

Since the thousands of noisy feminist movements and all other so called women's liberation activists refuse to speak up on behalf of the oppressed Muslim women of the world it is incumbent upon male correspondents like myself to speak on their behalf and agitate for their emancipation.

We can make a start by banning the burqa, along with child brides, polygamy, sharia law and prosecuting the practitioners of FGM.

Posted by Daniel Thomas at 7:33 PM