Socialist Solidarity Tour - Cuba, Argentina But Why No Venezuela?

Followers of the American political scene cannot have failed to notice the aging of President Obama before their very eyes; the greying hair, the stuttering and indecision when talking without his teleprompter, or the lack of fluency and clarity when explaining his administration's strategy on everything from the economy to the murder and mayhem being perpetrated by Muslim terrorists around the world.

With this in mind it was heartening to see him totally relaxed on his history making visits to Cuba and Argentina. Obviously being among like minded ideologues who have a common belief in the redemptive benefits of socialism is preferable to being among those selfish capitalist millionaires and billionaires with their corporate jets and chauffeur driven limousines.

Much better to be in the land of communist revolutionaries who don't have to follow such inconveniences as a constitution or observe basic human rights such as the right to life, liberty and the pursuit of happiness.

Unlike President Obama, the Castro brothers - along with their late lamented comrade-in-arms Ernesto 'Che' Guevara - never had to concern themselves with stressful inconveniences such as freedom of speech, a citizens right to bear arms, fair trials, individual liberty, free multi-party elections, term limits etc.etc.

Hence the brothers have lived to a stress free, ripe old age with the freedom to enjoy all the benefits that communist dictators have enjoyed since this liberating ideology was first codified by the founding father of communism, comrade Karl Marx.

How relaxed he looked doing the wave at a baseball game unperturbed by the murder and mutilation of his fellow Americans as they went about their lawful business in Brussels, Belgium. It was a world away from the stress of responding to the deaths of the brutally murdered innocent street thugs Trayvon Martin and 'Hands up Don't Shoot' Michael Brown.

As all pre-pubescent and superannuated hippie revolutionaries know, Cuba is the final resting place of communist icon Che Guevara.  Che happens to be the original 'hands up don't shoot' martyr to be sanctified in the fight against the twin evils of individual liberty and free enterprise. This is what he cried out as he selflessly and valiantly surrendered to the Bolivian militia he had sworn to fight to the death.

Despite being a psychopathic murdering thug Guevara's image has become iconic and adorns the T-shirts of immature wannabe revolutionaries worldwide. My personal favorite images which portray the reality of the murdering thug in all his glory are not quite so popular. One taken after his capture and the other on a gurney after he met his maker. 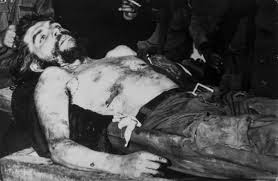 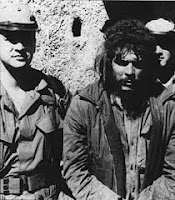 Next stop on Obama's Socialist Solidarity Tour was Argentina, the country of Che Guevara's birth and a classic example of socialist failure. The country is still recovering from years of government spending on 'free stuff' and imposed equality of outcome. Defaulting on it's debt repayments is a kick in the teeth for taxpayers elsewhere who financed the lifestyles of the feckless Argentinians.

The realities of the middle east disaster and the rapid disintegration of the nation states of Europe were a million miles away has he hit the dance floor in Buenos Aires with a dazzling Tango.

Dancing With The Stars obviously beckons should he fail to get the UN sinecure he is apparently seeking when he finally leaves office.

If any country needed a morale boosting Presidential visit it would be Venezuela. One would have thought that in an act of socialist solidarity any spare space on Air Force One could have been used for a consignment of toilet rolls or bread rolls which are in short supply in the bankrupt ravaged country.

It would not solve the problems of course, only the overthrow of socialism can do that, but it would have been a symbolic act of comradely solidarity with the unfortunate victims of imposed social justice. It was not to be and the Venezuelan people were left to wallow in their poverty and misery without a quick two-step from President Obama.

The President is now back home steering the ship of state away from that shining city on hill with it's rampant inequality, Bibles, religion and guns. Cuba and Argentina provided a 'safe space' for the President to get away from the consequences of his policies and that nasty Mr.Trump.

Posted by Daniel Thomas at 9:15 AM