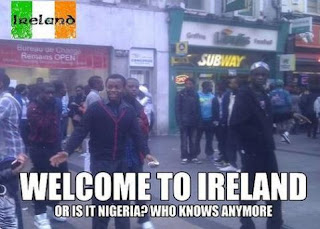 The veil of censorship that the European Union is using to shroud the violent civil unrest that is engulfing its member states was lifted recently with the news that African immigrants were running riot on the streets of Dublin, Ireland terrorizing workers and shoppers.

What is remarkable about this outbreak of violence by African invaders is the fact that the history of Ireland is one of a constant bloody struggle for self-rule from the British invaders of centuries ago.

The Irish struggle for independence is too complex for an article such as this but needless to say thousands of patriots made the ultimate sacrifice engaging in guerrilla warfare against the British army and police. Thousands more died during the Irish Civil War which preceded the formation of the independent Irish Republic in 1922.

That wasn’t the end of the violent struggle however since the six counties that made up the province of Ulster remains part of the United Kingdom of Great Britain and Northern Ireland to this day. Patriotic nationalist fighters remain determined to re-unite the province with the Republic and are willing to kill and maim in pursuit of their goal.

It was patriotism and the overwhelming love of Ireland that drove the uprising against British rule but where is that patriotism now?

Why has the sovereignty for which Irish patriots sacrificed their lives been meekly surrendered to unelected foreign bureaucrats in Brussels especially when it was known that membership of the EU meant the destruction of the independent nation state of Ireland and the replacement of its culture and way of life with a so-call ‘multi-cultural society’?

The modern Irish are the antithesis of the previous generations who fought and died for Ireland. Overtly sensitive and wracked with political correctness they wouldn’t dream of picking up a rifle and fighting to regain their dignity and restore the independence of the Emerald Isle. 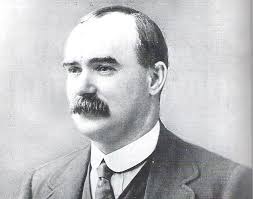 Men like James Connelly who was so badly wounded after the Easter Rising of 1916 he had to be strapped to a chair before he was put up against the wall of Kilmainham Gaol and shot.


Along with the thirteen other leaders of the uprising who were also executed, he would be rolling in his grave that the Ireland he sacrificed his life for is now a bankrupt third world backwater dictated to by foreign bureaucrats who could care less about Irish history or the wellbeing of the Irish people.

The archetypal Irishman is now represented by the drug addled Saint Bob Geldof who fled the Emerald Isle to live with the ancient enemy in England and his virtue signaling pal Bono whose incessant calls to open the borders to the hordes of economic migrants from Africa are as tedious as his records.

Hyphenation of nationalities is the means by which the global elite divide and rule communities and signal the end of the homogeneous nation state and its culture. It is also used to impress upon the subject people that they no longer exist as an exclusively indigenous entity in their own native land.

African-Irish is the phrase used to describe these rioting immigrants who are as much Irish as James Connolly is a Nigerian but nevertheless they are now recognized as bona fide Irish folk.

African-Irish join other such manufactured citizen groups as Pakistani-British and Somali-Americans etc. and by design this phony hyphenated system does not work in reverse for the simple reason that it’s only the Judeo-Christian countries from the developed world that are scheduled for ‘un-homogenising’.

This is the politically correct term for ethnic cleansing or cultural replacement preferred by the UN/EU elites as they construct their egalitarian, borderless one-world wet dream.

It is extremely unlikely one will read about white Irish-Africans rioting in Lagos or white British-Pakistanis rioting in Islamabad let alone white American-Somalis rioting in Mogadishu.

Since joining the EU and the Eurozone the Irish economy has crashed and its major cities are blighted by mass immigration. The solution for this is for its gutless, subservient politicians to follow the British lead and trigger Article 50 of the Lisbon Treaty and leave the EU before the whole rotten empire collapses under the weight of its corruption.  #Irexit.

In conclusion, nobody but the Irish can express themselves better in ballad and folk song so here are a couple from the days when the Irish were a dignified and proud people dedicated to their beloved Emerald Isle.


Off To Dublin In The Green

And we're all off to Dublin in the green, in the green
Where the helmets glisten in the sun
Where the bayonets clash and the rifles crash
To the echo of a Thompson gun


News items relating to this article:

And finally, at least one Irishman understands the issue.

Posted by Daniel Thomas at 2:01 PM