George Clooney Runs Away From The Monster He Helped Create 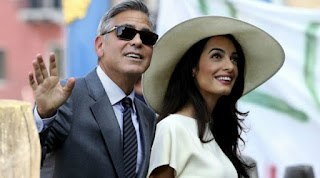 Nobody symbolizes the utter hypocrisy and cowardice of the multi-millionaire acting community better than George Clooney. Pretend tough guy George packed up his wife and kids and ran away back to America when the violent disaster caused by the mass immigration he advocates came a bit too close to home.

Tough guy George is not only famous for his roles in front of the movie camera; he is equally famous for seeking out the news cameras to advocate the opening of British borders to unvetted Syrian refugees.

While the celebrity obsessed public pour out their adoration by the bucket full and shower the virtue signaling hypocrite with undeserved accolades he is laughing in their faces all the way to the bank.

His concern for refugees is totally bogus as is his supposed love of Great Britain, its people and its way of life.

We can only hope that the emotionally retarded people who fall for the faux concern that actors like Clooney have for the world's unfortunates learn from his cowardice and treachery. He doesn’t mean a word he says when he appears in front of the cameras with his phony pathos and empathy.

Clooney relies on positive publicity to sell his movies and increase his already considerable fortune and what better way to do it than by virtue signaling.

His public image is manufactured by professional image makers, thereafter his PR organization choreograph his appearances down to the minutest detail and being in the acting profession he performs them perfectly on the public stage.

Instead of running away from them, if Clooney really cared for the welfare and wellbeing of refugees he would use his considerable fortune to alleviate their plight and offer the dozens of spare rooms in his several mansions as accommodation for the families and children he claims to champion. 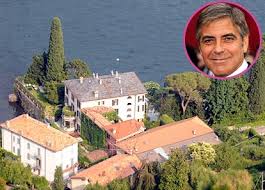 Tough guy George could have fled to his other mansion on Lake Como since the Italian government have done his bidding and opened up their borders to hordes of refugees.

Not bloody likely. Just like all the other areas around the civilized world that have fallen victim to mass immigration the once idyllic Lake Como is been reduced to a cesspit resembling the backstreets of Mogadishu or Addis Adaba.

So why is tough guy George running away from England’s green and pleasant land since they have also done his bidding and opened their borders to hordes of Syrian refugees?

Perhaps it’s because he doesn’t want his children subjected to the horrific crimes committed by Syrian refugees against the British people which includes rape and child abuse.

Syrian sex beast who abused girls while ON BAIL for rape is locked up.

Police arrest 900 Syrians in England and Wales for crimes including rape and child abuse.

The fact is that like the rest of the virtue signaling, multi-millionaire acting community George Clooney is a stonking great hypocrite of the very highest order who will look after himself and his own family while abandoning everyone else's to the savagery of the monster he himself helped to create.

Not in my back yard. Further reading on another multi-millionaire hypocrite from the acting community that wants to dump refugees in your community not hers.


Emma Thompson Stands Up For British Culture Against Tesco
Posted by Daniel Thomas at 2:42 PM