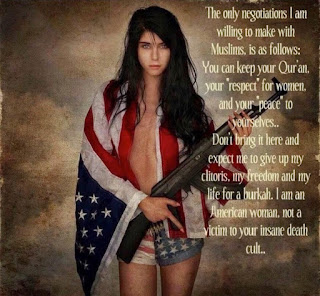 Despite heavy censorship by the hopelessly ‘progressive’ government in Sweden the world has learned about the rape epidemic that is being enjoyed by their Muslim immigrant population which has earned the Scandinavian basket case the dubious title of rape capital of the world.

As is usual in today’s post democratic age it is the raped and murdered women of Sweden not the politicians who are paying the bloody price for the imposed multi-culturalism that is demanded by the UN/EU global elite.

Why Swedish men sit silently by and allow this violent assault on their wives, daughters, mothers, sisters and female neighbors is a mystery. They have obviously lost the fearless mettle that was the hallmark of their Viking ancestors and entered a state of supine cowardly acceptance of violent rape and murder for fear of offending their Muslim colonists.

Swedish women should look across the Atlantic Ocean and learn from the liberated women of America and take responsibility for their own safety and security.

They should have learned by now that they cannot rely on their government or their cowardly menfolk to protect them from the invading Muslim hoards that are running rampant in their once relaxed and peaceful country.

They cannot rely on the phony feminist movement either who are vocal about abortion and so-called reproductive rights but silent on the appalling abuse of women by the adherents of Islam.

The American poster girl's message should be the rallying cry not only for Swedish women but for all women around the world:

"The only negotiations I am willing to make with Muslims, is as follows: You can keep your Qur'an, your 'respect' for women and your 'peace' to yourselves.. Don't bring it here and expect me give up my clitoris, my freedom and my life for a burkah. I am an American woman, not a victim to your insane death cult.."

Even though they are the most notable of the ‘progressive’ basket cases that inhabit the planet, the message doesn’t only apply to Sweden or exclusively to women. It applies to all countries in the developed world that have been ordered to open their borders by the UN/EU global elite to hordes of third world invaders to facilitate their cultural replacement agenda.

EU countries such as Germany, France, Belgium, Italy and Great Britain are being blighted by violent crime perpetrated by Muslim invaders including rape, murder and Islamic terrorism.

Not even the United States is immune from immigrant violent crime with areas such as Dearborn, Michigan reduced to a Somali ghetto that is of no benefit whatsoever to the American people either economically or culturally. 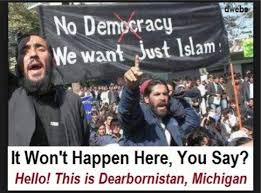 Unlike Sweden, the European Union and the rest of the developed world, the American people are blessed by their culture of individual liberty and their spirit of self-reliance that allows them to take responsibility for their own lives and those of their loved ones.

To the envy of the world they are aided and abetted in their love of individual liberty by a constitutionally limited government and the inalienable right to bear arms to keep it that way.

The rest of the world should take note: Despite eight years of managed decline under President Obama and his army of ‘progressive’ politicians to whom Swedish society is an aspiration, the American people now have a President in Donald J Trump who loves his country and is committed to reversing the decline and making America great again.

Note: Kudos to the creator of the poster who is anonymous at time of writing.

Posted by Daniel Thomas at 1:15 PM