State Oppression in Catalonia – Real Fascism in Spain Is Ignored 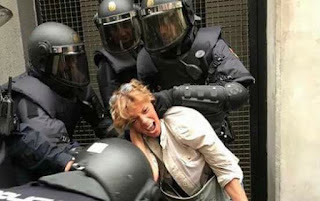 Two of the most vocal and active groups commanding the headlines of late are Antifa in the USA and Unite Against Fascism in Great Britain (UAF). Both groups engage in violent civil unrest and other anti-social activities to save us helpless souls from fascism and its genocidal sibling, Nazism.

Either by ignorance or design these self-proclaimed anti-fascists consider anyone who doesn’t share their ‘progressive’ world view to be a fascist or a Nazi and therefore must be intimidated into silence and banished from the public domain.

They believe they are a valiant resistance to fascist regimes and to protect the people they must smash windows, destroy businesses and shut down debate on college campuses and elsewhere. They also attack the police who are often under orders by agenda driven mayors to stand down.

Providing the odds are heavily in their favor they violently attack individuals who dare to raise a dissenting voice or display any sign of patriotism.

These people either lack any self-awareness or they are totally brainwashed since they fail to see that the activities they engage in were designed and used by the original fascists and Nazis in their pursuit of power during the European inter war years.

When the Spanish government sent in ninja clad, heavily armed gangs of thugs to violently prevent a referendum taking place in Catalonia it was reminiscent of the attacks by fascist General Franco in the same province during the Spanish civil war of 1936-39.

It was also a lesson for those who claim to be anti-fascists of what real fascism actually looks like.

The extreme violence sanctioned by the Spanish government saw the state police assault anyone trying to participate in, or provide security for, an independence referendum. This included young and old alike, many of who sustained serious injuries and to their eternal shame they even assaulted the local police and firemen who attempted to protect the people from the violence.

When a government uses violence on this scale against its own people for participating in an innocuous, non-binding election, its fascism plain and simple.

Disgracefully, the leaders of the European Union failed to condemn the violence committed by one of their member states: their response gives an insight to what kind of regime it is since it bears all the hallmarks of being a fascist regime in its own right.

They justified the violence by claiming that the referendum was illegal. These are the same EU leaders who are planning a centrally controlled, pan-European paramilitary police force with jurisdiction in all member states.

The Spanish government could have adopted the modus operandi of the EU by just ignoring the result just as they always do with referendum results they disapprove of.

It’s also worth noting the response of the British and European anti-fascist movements, such as UAF, to this blatant display of actual fascism taking place on their doorstep. In short there was no response; they kept their heads below the parapet rather than go fight for the cause they espouse.

Compared to the anti-fascists of the inter-war years these noisy adolescents are an embarrassment to the cause and would be roundly disowned by their illustrious anti-fascist forebears of old.

When General Franco attacked Catalonia during the Spanish civil war, ant-fascist volunteers from Great Britain, Europe, and the wider world, made their way to Spain to join the International Brigade and other units to fight alongside the Catalonian people against his army.

These volunteers were real anti-fascists who were not content with token gestures such as smashing windows, setting fires and violently assaulting innocent bystanders who they accuse of being fascists. They travelled to another country to risk their lives fighting a real fascist with a committed army backed by Adolf Hitler’s Nazi’s who would kill them without mercy.

If the activists from UAF and Antifa were serious about confronting fascism they would have made their way to Catalonia like the International Brigade of old to fight alongside the oppressed people.

Distance and accessibility is no excuse. The volunteers of old had to make the arduous journey across Europe by road and rail avoiding the authorities along the way. Today Barcelona is accessible by air and is not much more than hour away from most European cities.

If Muslim volunteers from across Europe and the world can make their way to Syria and Iraq for their cause surely anti-fascists can do the same.

The truth is that these Toon town revolutionaries are useful idiots employed by the ruling elite to use violence and intimidation to silence opposition to the ‘progressive’ global agenda and to undermine any government that doesn’t fall into line as is the case with President Trump's administration and Brexit.

In conclusion; among the volunteers who made their way to Spain to fight Franco and his fascists was British journalist and author, George Orwell, who recorded his experiences in his novel, Homage to Catalonia. He was joined by his equally committed anti-fascist wife Eileen.