Angela Merkel To Stand Down – Don’t Bet On It 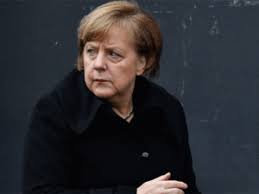 The spirits of the much-abused people of Europe were raised at the news that the disastrous reign of the mentally unstable German Chancellor, Angela Merkel, was finally over. It took the rape and murder of hundreds of Germans, and other European citizens, to bring them to their senses and muster up the courage to take decisive action and express their disapproval of her tyranny.

Before people get too carried away with their celebrations it must be understood that Merkel is a fanatic with an agenda who is also addicted to power. She is unlikely to relinquish this power easily and ride off into the sunset on account of something as mundane as an election.

Like the other European leaders Mrs. Merkel is a committed globalist who believes that the people are not qualified to decide how they are governed. This is made abundantly clear by the way that elections, referenda and mandates from the great unwashed are routinely ignored.

Like her notorious predecessor Mrs. Merkel’s mission in life is to realize the age-old dream of replacing the independent nation states of Europe with a single centrally controlled superstate dominated by Germany.

Mrs. Merkel stepping down as the leader of her Christian Democratic Union (CDU) does not mean that she will abandon her dream for a Vichy-type Europe; far from it. She will arrange another platform or source of power with which to pursue it to its conclusion.

The initial euphoria at her supposed resignation dissipated quickly when it was realized that if she doesn't change her mind in the meantime she wasn't going anywhere until 2021. This leaves her plenty of time to organize another power base. If a week is a long time in politics, then three years is an eternity.

Two alternative power bases are the Presidencies of the all-powerful European Union Commission and the European Council. These will become available when the terms for the current incumbents end in 2019. These vacancies would be a shoo-in for the power-hungry Chancellor and an ideal opportunity for her to continue the destruction of the European nation states and their centuries old cultures.

Having power over the lives of 500 million people would not only satisfy her megalomaniac instincts but would hand her the power to finally achieve her dream of a German dominated United States of Europe.

Merkel is not the only politician that refuses to accept their time is up or to accept that the people have spoken against their perceived wisdom. Former Prime Ministers Tony Blair and John Major are back in the front line working hard to overturn the result of the Brexit referendum as is the former Deputy Prime Minister, Nick Clegg.

Across the Atlantic, former President Barack Obama has returned from the political knacker’s yard to campaign against President Trump and the Republican Party. This PR manufactured phony President and hopeless narcissist could never resist an opportunity to sing his own praises and talk about his non-existent achievements.

In what has become a reason for both mirth and pity, a stake through the heart with a double garland of garlic around her severed neck won’t keep Hillary Clinton in the graveyard of failed politicians.  Such is her belief in her own political immortality, her Royal Ghoulship, accompanied by her predator husband, will never accept that her public life is over.

It seems like this ghost of elections past will keep haunting the American people for all eternity.

To conclude, Angela Merkel and the rest of these superannuated political has-beens should disappear from the public stage and enter holy orders to atone for the death and destruction they have wreaked upon the people of Europe and the world along with the other consequences of their disastrous tenures in office.

Posted by Daniel Thomas at 6:01 AM