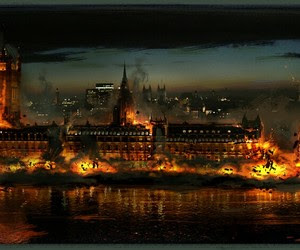 In Great Britain November the Fifth is known as Guy Fawkes Day which concludes with Bonfire Night where fireworks explode in the air and bonfires are lit upon which an effigy of gunpowder plotter Guido ‘Guy’ Fawkes is ritually burnt.  For the uninitiated the Gunpowder Plot was a conspiracy by a group of Roman Catholics to assassinate the Protestant King James I and replace him with the Catholic Queen Elizabeth of Bohemia.

They planned to do this by blowing up the Houses of Parliament on November the Fifth in the year 1605 when the King was due to address the Members at the opening of a new session.

The plot was discovered when the night before the Kings attendance the palace guards caught Guy Fawkes in the cellars below the House with barrels of gunpowder ready to ignite.

Guy Fawkes and his fellow conspirators were tortured mercilessly then tried for treason and convicted. The punishment for treason reflected the seriousness of the crime and the conspirators were subsequently hung, drawn and quartered after which their body parts were distributed around the Kingdom as a warning to others.

Due to the treasonous behavior of the current inhabitants of the British Parliament, Guy Fawkes is being rehabilitated as a hero after more than four centuries as a villain. He is lauded as ‘the last man to enter Parliament with honorable intentions’ and his image is now used as a symbol of rebellion.

The Guy Fawkes conspiracy along with his image was the inspiration for the hit movie V for Vendetta in which the hero succeeds in blowing up Parliament in his fight against a future authoritarian, big brother-like tyranny that has usurped political power and suspended democracy.

The low-life rabble that currently infests the sewer that the British Parliament has become will most likely be spared the punishment suffered by Guy Fawkes and his co-conspirators should they ever be brought to book for their treason.

Since the destruction of the peoples’ Parliament and the surrender of its sovereignty to a foreign entity is their ultimate goal, these traitors are as guilty of treason as Guy Fawkes and his fellow plotters.

Four decades ago political power was usurped by a group of conspirators from all parts of the political spectrum with the intention of transferring the government of Great Britain from elected Members of Parliament to an unelected powerful elite located in Brussels who were intent on building a single, centrally controlled superstate. The United States of Europe currently known as the European Union (EU).

This surrendering of the sovereign power belonging the British people was to be achieved by stealth using subterfuge, lies and deception which carries on to this day.

With a complete disregard for their hard-won freedoms and democratic traditions, this ruling elite believe that the British people are not qualified to decide their own fate or how they are governed today and in generations to come.

Such is the complete surrender of its sovereignty the British Parliament, the Mother of Parliaments, has been reduced to a powerless talking shop which presents itself as an august sovereign legislature, but is in fact subservient to the unelected European Union Commission.

The European Court of Justice is now supreme over the British legal system which renders the British Parliament useless as a legislature, surplus to requirements and therefore a complete waste of taxpayers’ money.

If anyone was in any doubt that the Members of Parliament and the ruling elite have declared war on the British people and remain determined to disenfranchise them by denying the ancient right to self-government, then the Brexit referendum is the final proof should any proof be necessary.

Tired of the disastrous results of EU membership and the continual refusal of the ruling elite to hold a referendum, the British people were becoming vociferously rebellious and deserting the legacy political parties in ever increasing numbers.

Concerned that their grip on power was threatened and believing they could rig a campaign and win a ballot the then Prime Minister, David Cameron, authorized a winner take all, In or Out referendum. Most importantly he promised that the result would be final, the government would implement the result and there would be no second referendum.

Both Houses of Parliament passed legislation to authorize the referendum and despite the most one-sided campaign in election history and incessant propaganda warning of a catastrophe should the British people vote to leave the EU, they voted to leave.

In the subsequent general election both major parties promised in their election manifestos to faithfully implement the result of the referendum. Both Houses of Parliament passed legislation to enact Article 50 of the Lisbon Treaty which is the legal mechanism for leaving the EU.

Despite this absolute commitment to honor the result and leave the EU, the ruling elite in Parliament refused to accept the people's choice and worked studiously to overturn the result and keep the British people inside to the EU.

They have done this using every dirty trick at their disposal including using activist judges who are dedicated to the European Union to rule frivolous law suits in favour those wanting to remain. These traitorous quislings give fealty to the European Court of Justice and in an act of unforgivable treason they acknowledge the supremacy of foreign made European Union law.

The government propaganda machine has not stopped forecasting Armageddon since the referendum in June 2016. Known as ‘Project Fear’ they use fake statistics and outright lies to convince the British people that they should repent their historic mistake and vote again.

The charlatans in Parliament are organizing and agitating for a second referendum to overturn the result of the first and worst of all the life-long Europhile Prime Minister, Theresa May, has used the so-called negotiations to keep the British people attached to the European Union institutions in perpetuity.

Known as BRINO, this Brexit in name only will reduce Great Britain to a vassal state which will be subject to EU rules and regulations without any input in how they formulated.

By their actions the charlatans in Parliament, in the establishment, in the law courts and every other institution that is working to overturn the result of the Brexit referendum and surrender what’s left of the British peoples’ sovereignty to a foreign power are committing treason.

If they succeed the British Parliament is no longer the government of the people, for the people by the people, it is the enemy of the people who’s only function is to keep them subject to the unelected ruling elite that have their own empire building project at heart.

The only option for those British people who long for the traditional liberties that only a sovereign independent Great Britain can guarantee is to burn down the current rotten Parliament, salt the earth and start again.

To conclude, as the four centuries old nursery rhyme says: the treason of Guy Fawkes should never be forgot, and neither should the treason of the current ruling elite and their traitorous puppets in their phony Parliament.

Remember, remember the Fifth of November

I see no reason why gunpowder treason

Should ever be forgot