The EU Does Not Negotiate – Vichy Britain Here We Come 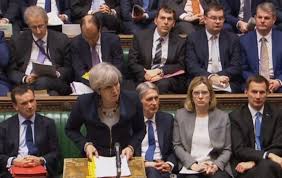 For the benefit of Theresa May and the party of duplicitous cowards she leads in Parliament, most of the British electorate are fully aware that the European Union is a political project where the goal is the replacement of the independent states of Europe with a single, centrally controlled state.

As the people of Europe have learned to their cost, this United States of Europe will be borderless and governed by anonymous appointed bureaucrats using the outdated Soviet Union model.

It is with that in mind that the British people voted in the Brexit referendum to leave this political union being imposed on them much to the horror of the globalist ruling elite at home.

It was not only the ruling elite at home that were horrified at this desire of the people to be free and self-governing. The ruling elite at the EU headquarters in Brussels and the spiritual home of globalism, the United Nations in New York, were also given a rude awakening.

As a dedicated devotee of the EU Theresa May understands the course is set for the nation building project and this course cannot be altered or deviated from in any way.

With that in mind she is also aware that the EU ruling elite does not negotiate under any circumstances, neither does it respect the results of elections or referendums if they hinder the nation building project.

After cancelling the so-called 'meaningful vote' in Parliament because she knew she would lose, Theresa the Appeaser, as she is now known, has embarked on a tour of European capitals in order to fool the people into believing that she can get concessions to her surrender document that will then be spun as a hard-fought personal victory.

She obviously thinks that the British people have forgotten the tour of European capitals by her predecessor, David Cameron, who apparently renegotiated Great Britain’s terms of membership and reformed the EU. It was the only reformation in history where nothing changed whatsoever but I digress.

Despite being spun as a victory for British diplomacy, as well as an example of Cameron’s negotiating skills, he got the bum’s rush from the EU bureaucrats and was sent packing. Following that he was publicly humiliated by the megalomaniac German Chancellor Angela Merkel for having the audacity to suggest that the EU changes its ways.

Mad Angela Merkel is the de facto leader of the EU and nothing gets done without her explicit approval. The last person Theresa May visited before unveiling her Chequers surrender document was Merkel when she flew to Berlin the day before the unveiling to seek her blessing.

The first person she went groveling to after cancelling the Parliamentary vote yesterday was the German Chancellor because only Merkel can save her deal and her tenure as British Prime Minister.

The EU bureaucrats have already made it clear that they will not renegotiate her surrender document which gives them the power over when Brexit can happen and Great Britain be released from its shackles.

With this in mind, Mrs. May is not embarking on this tour to change the document but to seek re-assurances that the EU will not keep Great Britain locked into to shackles indefinitely.

This appalling document may be acceptable to Mrs.May and her like minded cronies in the Establishment but it is not acceptable to the British people.

As current events across Europe demonstrate, Brexit contagion is their greatest fear and the globalists know that the EU cannot survive with a free and prosperous Great Britain just twenty miles across the English Channel. Therefore, it is essential that Great Britain remains subject to EU laws, regulations and diktats or its economy must be destroyed.

If it’s the latter and the British people refuse to rise up, then two millennia of history will finally be over and Great Britain will be reduced to a governed province of a European empire for ever. Vichy Britain here we come.

Posted by Daniel Thomas at 9:02 AM