Politicians - The Enemies of The People and Democracy 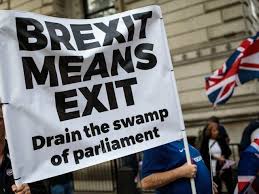 There is no group of people more duplicitous and outright treacherous than the politicians that infest the fetid swamp of the Westminster Parliament. Their contempt for the people is out in the open for all to see and their pretense of representing the people or protecting their interests is truly nauseating to behold.

In the 2017 general election both major parties were elected on a solemn promise to implement the result of the Brexit referendum subsequently attracting 80% of the votes cast.

It was these same Parliamentarians that passed a law triggering Article 50 of the Lisbon Treaty which started the two-year leaving mechanism for member states. This two-year period ends on the 29th March 2019.

Despite these huge mandates and promises, the politicians have spent the two-year leaving period engaged in a campaign to either ignore the referendum result or overturn it and keep the British people locked inside a corrupt political union that wants to abolish their nation and absorb it into a centrally controlled superstate.

During the hours and days of debate in Parliament the transfer of sovereignty from Parliament to Brussels was never raised as an issue. A procession of speakers rose to talk about the disastrous effect of Brexit on the economy and trade and go on to demand that Brexit is delayed or a second referendum be put to people where leaving under WTO rules is not on the ballot paper.

Since Theresa May’s Withdrawal Agreement is a Brexit in name only which keeps Great Britain locked inside the EU institutions, what the Parliamentarians are demanding is a second referendum where leaving the EU is not on the ballot paper.

The transfer of sovereignty in the past, not the economy or trade, is the reason millions voted for Brexit. The surrender of control over borders and immigration, legislation, trade, the judicial system and other crucial areas was proving too much for a proud, freedom loving people with a tradition of patriotism and independence.

It is the attitude of the politicians to sovereignty that condemns them into the pit of contempt they so richly deserve. They claim Parliament is sovereign not the people so only they should decide whether the country leaves the EU or not.

This is the same political class that has been transferring Parliamentary sovereignty to the EU for decades without the promised consent of the people via referenda.

Since Great Britain joined the Common Market (the EU predecessor) in 1972 the political class have insisted that this was an economic project not a nation building political project and therefore no sovereignty would be transferred. In a degradation of debate that lingers to this day, anyone who suggested otherwise was accused of scaremongering and smeared accordingly.

Despite the obvious surrender of sovereignty from the Westminster Parliament to the EU Commission in Brussels the political class continue to ignore it as a primary reason the British people voted to leave.

What is at stake is Great Britain continuing as an independent, self-governing nation or becoming a powerless vassal state of a centrally controlled United States of Europe.

To sum up, all the big guns of the EU have been consistent in their call for Great Britain and the other member states to transfer their sovereignty from national Parliaments to the unelected EU Commission which has executive power and is sole the initiator of legislation for the entire Union.

No student of politics can forget the epic rant of EU fanatic Guy Verhofstadt demanding nation states surrender their sovereignty to him and his Fourth Reich.

In a clear demonstration of their complete and utter contempt for the country and its people, this is the Great Britain hating fanatic that the EU Parliament appointed as their chief negotiator for Brexit.

The politicians that infest the Westminster swamp claim to be a sovereign Parliament but have spent their time since the 2016 referendum trying to overturn Brexit and hand over the peoples’ sovereignty and their own legislative functions to a closed cabal of unelected foreign bureaucrats in a foreign land.

Posted by Daniel Thomas at 5:18 AM