President Trump Holds A Victory Rally As Loser May Surrenders 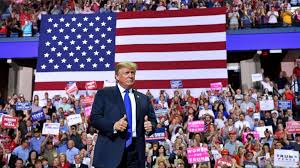 Imagine the effect on a patriotic British citizen watching in utter despair as his Prime Minister uses her exalted position to conspire with a foreign political entity to hand over the governance of the country she has sworn to serve.

Imagine how he feels as she portrays Great Britain and its people as so weak and pathetic, they are incapable of governing themselves so the reigns of power must be handed over to a cabal of foreign bureaucrats who have a history of disrespecting and vilifying them and their country.

Imagine his despair as he stands powerlessly by as the Prime Minister and Parliament hand over control of the country’s laws, borders, trade and money to an organization that is so corrupt its accounts haven't passed an audit for decades and who’s ruling clique cannot be removed by the ballot box.

Now imagine the devastating effect on his morale as this disenfranchised Briton tunes in to President Trump’s rally in Grand Rapids, Michigan and watches as the President they elected, fresh from defeating the establishment, pledges to continue reversing the managed decline of the Obama years and keep fighting to make America great again.

That disenfranchised, disillusioned Briton was me and as I watched The President reel off his achievements and re-assert his authority over the establishment, I couldn’t help but compare him to the dire Prime Minister Theresa ‘the Appeaser’ May.

While President Trump vowed that America will always be one indivisible, sovereign nation under God, PM May was doing the exact opposite and making Great Britain a vassal state of the European Union subject to the laws and regulations of this foreign entity based in Brussels

While President Trump vowed to maintain the American military as the most powerful on the planet, PM May was continuing to deplete the British military in preparation for its absorption into the foreign controlled European Defence Force.

While President Trump re-asserted that America is a Christian country, PM May continues with the Islamification of Great Britain and, ignoring the world-wide slaughter of nonbelievers, keeps repeating the false mantra that Islam is a great global religion of peace.

While President Trump is fighting to deal with the immigration crisis at the southern border, PM May has surrendered control of Great Britain's borders to the European Union which has an active population replacement agenda.

While President Trump is taking concrete steps to protect the American peoples' first amendment right to free speech, that ancient right is under attack in PM May’s Great Britain by the politically correct agenda of the politicized police 'service'.

While President Trump stated that the American people stand for the national anthem and respect their flag, PM May has allowed local authorities to ban the Cross of St George and the Union flag on the grounds that its offensive to immigrants.

While President Trump speaks loud and clear about the poison ideology of socialism and vows that America will never become a socialist country, PM May is handing over the government of Great Britain to a political entity modeled on the old Soviet Union. 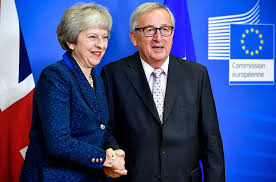 And so it went on, President Trump putting America and the American people first while PM May is putting the European Union first and the British people last.

I watched with envy as the enthusiastic crowd cheered and applauded President Trump as he vowed that he will always put America first and work tirelessly to keep them safe, secure and prosperous while protecting the traditional American way of life.

While President Trump does not fear any world leader and always negotiates the best deal for the American people, the duplicitous Europhile Theresa May puts the well-being of the European Union first vowing never to put it at a commercial disadvantage.

I am sure I am not alone, but having watched both leaders in action over the past couple of years I wish that President Trump was British and Prime Minister of the Sceptered Isle instead of the treacherous Theresa May who has no desire or intention to ever make Britain Great Again.